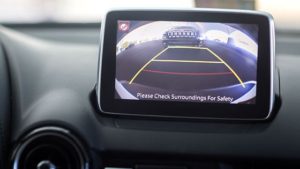 Signaling another trend that could eat into collision repair volume in the next decade, IIHS research Thursday indicated that rearview cameras cut backing-up crashes by an average of 16 percent.

Repairers and insurers with a client book of senior citizens might feel the biggest impact in frequency once a National Highway Traffic Safety Administration requirement for standard rearview cameras starts in 2018.  The Insurance Institute for Highway Safety’s study of actual police reports found that drivers 70 or older armed with a rearview camera cut their backup crash rate 40 percent. Drivers younger than 70 years old cut their collisions 15 percent.

Even parking sensors alone might have an impact, at least for older drivers. The Buick Lucerne, which had sensors but no camera during the study, saw its crash rate fall 34 percent. Mercedes vehicles with only parking sensors only saw a statistically insignificant 13 percent drop.

The IIHS observed that Lucerne owners are usually older than the average driver, which would explain the different results. When Cicchino lumped the Lucerne and Mercedes data sets together, she found that younger drivers apparently weren’t helped at all by sensors — but those at least 70 years old cut their crashes 36 percent.

“Judging distances becomes more difficult with age, so that could make sensors useful to older drivers in a different way from the increased visibility provided by cameras,” Cicchino said in a statement. Backup crashes, which include both backovers and other collisions in reverse, don’t appear to yield heavy frequency — they account for only about 48,000 injuries a year. So they’re not quite the impending threat to volume-centered repairers that autobraking will be.

But if your shop does see a lot of those repair orders (or senior customers), mark your calendar: The average collision vehicle is around 6-7 years old, which means your backup crash business should drop off noticeably between OEMs’ May 2018 deadline to make cameras standard and 2025.

If not sooner. In 2014, NHTSA wrote that it anticipated 73 percent of vehicles would be “sold with rearview video systems by 2018” anyway.

Severity will rise, of course — installing a camera itself costs an OEM $43-$142, NHTSA estimated, and that’s just at the factory, not what the price would be to buy and install the part properly in the aftermarket. (Basically, the OEM’s cost jumps arond $100 if they need to stick a screen in the dash but is only $43-45 if they already had a display and just had to buy a camera.)

There is the possibility that crashes without an injury or single-party crashes with low damage — “My idiot kid backed into the mailbox” — aren’t being reported to authorities. The IIHS explored that possibility using insurance loss data but still found such collisions to be a tiny subset of collisions as a whole.

“A limitation of the new study is that many minor backing crashes aren’t reported to police because they involve only a single vehicle and often occur in driveways or parking lots,” the IIHS wrote. “Most of the crashes in the study involved one vehicle backing into another and therefore might not be representative of backing crashes in general.

“(Highway Loss Data Institute) studies of insurance losses have shown that both rearview cameras and rear parking sensors reduce claim rates for damage to other vehicles. These effects are smaller and not as robust as the benefits identified in the latest IIHS study. That’s because the HLDI analyses include all types of crashes, not just backing collisions, which make up a small percentage of the total.”

The backup camera on a Mazda CX-3. (Provided by Insurance Institute for Highway Safety)