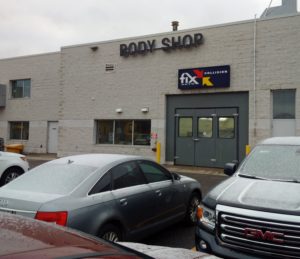 The Automotive Industries Association of Canada, the trade group which launched I-CAR Canada, announced Friday that it had recognized the first collision repairer in the country under its new accreditation program.

Fix Auto North Bay, located in Ontario, was Shop One under the Canadian Collision Industry Accreditation Program first announced in May. Fix Auto Canada’s corporate office in October urged all of its franchisees to join the CCIAP standard.

“Once the program was officially announced, we were eager to begin the process,” store manager Kelly Roberts said in a statement. “We are extremely proud of the quality of work in the shop and the team holds itself to a pretty high standard. Having an accreditation from a Canadian program for Canadian businesses just adds more value and reassures clients to the quality of the work we do here. ”

Canada doesn’t have quite as many OEM certification programs as the U.S., and CCIAP Director Andrew Shepherd said Friday that given the extent of consolidation in Canadian collision repair, there’s a stronger agreement that the industry should run its own certification standards. About 70 percent of the industry’s business is done by major repairer networks, he said — a big difference from the U.S. collision repair industry, which is consolidating but still largely independent.

The Collision Industry Information Assistance trade group also is launching a separate network of shops vetted for OEM repair quality. The shops will be recommended to Canadians under a new roadside assistance app if the customer lacks a preference.

The AIA noted in October that the CCIAP standard “matches those developed by the vast majority of Canadian OEs,” and the system’s requirements should seem familiar to U.S. repairers on an OEM network. Shepherd said he’d received “confidential feedback” from OEMs supporting the program.

Criteria include I-CAR Gold Class status, 3-D measuring, access to OEM procedures, advanced welding capabilities — and the ability to not only pre-/post-scan a car but calibrate its technology. Aluminum repair minimum requirements are an optional add-on, similar to Assured Performance’s rider for the Ford F-150 in the U.S. (Though Ford has partnered with Assured Performance in the U.S., there’s no aluminum-certified Ford network in Canada, Shepherd noted Friday.)

“Store manager Kelly Roberts was a tremendous force behind theirs being one of the first full I-Car Gold Class shops in Canada and I see accreditation as a natural progression for the shop and its staff,” Shepherd said in a statement. That’s been a criticism of some U.S. certification networks or shop requirements, with the theory that shops buy the equipment, obtain certification, and then let the gear and training gather dust while they revert back to incorrect but easier or quicker traditional repair methods. (The counterargument: Some shops can’t even measure up to that criteria, or remain a complete black box in terms of capability.)

For now, “the auditor just asks about the shop process” and the CCIAP shop provides proof of compliance, Shepherd said — “I suppose until I catch some people playing with the truth.”

However, Shepherd said his program would likely evolve in large part with “where the OEs want to go with it,” describing the industry at the “start of this ramp on repair verification.”

“The standards in all of these programs have got to be morphing,” he said of collision repair networks. Vehicle technology just changes too fast for shop requirements to stand still, he said.

The CCIAP program’s advanced requirements only demand a single technician to have completed aluminum-specific I-CAR classes, which raises the issue of what happens to the shop’s certification if that technician leaves for a rival.

Shepherd said technician turnover isn’t as much of a concern in Canada as it appears to be in the U.S., given the ongoing but more mature consolidation in the northern nation.

“The turnover issue has not been demonstrated,” Shepherd said. The Canadian collision repair industry has about 4,000 shops now, and predictions have that nation’s industry falling to about 3,000-3,500 shops. Instead, “there’re shops closing and releasing their techs,” he said.

Shepherd noted that Canada’s technician licensing and apprenticeship requirements ensure a baseline level of skill, and his program’s demand that accredited shops be I-CAR Gold Class also served as a “proxy” for maintaining quality.