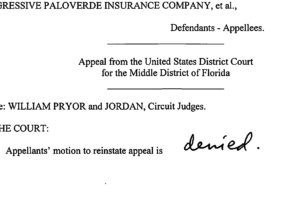 Two high-profile Louisiana lawsuits by collision repairers against the nation’s largest auto insurers expired in the Eleventh Circuit Court of Appeals and have been subsequently closed for now.

Parker Auto Body et al v. State Farm et al and Southern Collision and Restoration v State Farm et al were part of the slew of lawsuits alleging steering and antitrust violations which were filed against insurers in numerous states. All the cases were consolidated in the Middle District of Florida, where Judge Gregory Presnell dismissed them all, mostly for good (“with prejudice”), though he let some steering (“tortious interference”) claims remain.

The plaintiff in Southern Collision had let the case expire when attorneys failed to file two forms in August and never motioned to reinstate it. The appeals court dismissed the Southern Collision case Aug. 17, and the Middle District of Florida formally closed both cases Thursday, though it appears that the lack of prejudice in steering claims within might allow them to be reopened.

Parker and the other shops appealed to the Eleventh Circuit, arguing that Presnell was applying tougher thresholds for surviving dismissal than was proper at such an early stage of a lawsuit. Barring claims of UFOs or something, the court’s generally supposed to give the benefit of the doubt to the plaintiff at first and then grow more critical as the case progresses through its various pretrial and trial stages, the shops’ Mississippi-based Eaves Law Firm argued.

Several similar cases remain in play in the Eleventh Circuit — including others initially dismissed for blown deadlines or other issues but reinstated upon explanation from the attorneys. Another shop-versus-insurer lawsuit, Crawford’s Auto Center and K&M Collision v. State Farm et al, also remains in the Middle District of Florida. That one challenges insurers in a civil RICO action and is being handled by different counsel, but it was deemed similar enough to the others to be consolidated with them before Presnell.

The Parker case wasn’t so lucky. The Louisiana plaintiffs missed a deadline to file an appendix with the court, and the Eleventh Circuit dismissed the case Oct. 4. On Tuesday, Judges William Pryor Jr. and Adalberto Jordan denied a motion to reinstate the litigation. The Middle District of Florida formally closed the case Thursday.

That — for now — ends a case which had gained national prominence by the appearance of plaintiff Parker Auto Body on the February 2015 “Anderson Cooper 360” segment. That shop’s owner, Republican Matt Parker, also unsuccessfully ran against Republican Louisiana Insurance Commissioner Jim Donelon that year.

“The insurance company wants us to put this stuff on their car,” Parker tells him. “Now,if we refuse to put it on the car, then they label us as a shop not willing to go along with their program, and then they try and steer our business away from us.”

State Farm declined to comment on the end of the case in the appeals court.

“State Farm rarely comments on pending litigation and in this case has nothing further to share,” spokesman Justin Tomczak wrote Friday. As noted above, other virtually identical cases involving the insurer are still active before the Eleventh Circuit.

“Several related cases are pending before this Court. At the commencement of the first such case, Appellants’ counsel contacted the Eleventh Circuit Clerk’s Office requesting specific instructions regarding the filing of appendices,” Fry wrote Oct. 14. “The same clerk’s representative twice told counsel the appendix could be filed at any time, usually within seven to ten days but no more than two weeks after the filing of the brief.

Attorneys for defendants GEICO, Fireman’s Fund Insurance and Safeway Insurance challenged the motion (the other insurers named in the lawsuit didn’t join in), arguing that the clerk’s office had also in the first five cases “stated in bold, capital letters:

“APPELLANT’S APPENDIX MUST BE SERVED AND FILED NO LATER THAN 7 DAYS AFTER FILING OF THE APPELLANT’S BRIEF.“

The three insurers accused the law firm of “disregard for Rules and deadlines,” though the courts have still been granting requests for extensions or rule exemptions.

“This is not the first time Appellants’ counsel has tried to improperly shift blame for an Appellant’s late filing to the Clerk’s Office,” the insurers’ attorneys also wrote.

They then cited Eaves Law Firm’s request in the related Quality Auto Painting v. State Farm et al case to amend and expand their appeal brief as proof. However, that document tells a somewhat different story, describing discussions between the shops’ attorneys and clerk following insurers’ attorneys filing a dozen briefs and sets of arguments within at once.

Upon request from Defendant-Appellees, the Plaintiff-Appellants (“body shops”) agreed to consolidate the pending cases now before the Court. Body shop counsel was under the impression, based upon conversation with opposing counsel, that each side would be filing a single, consolidated brief.

Instead, Defendant-Appellees filed twelve response briefs on Friday, May 6, 2016. Body shop counsel contacted the Eleventh Circuit Clerk’s Office on Monday, May 9, 2016, and was directed to file a reply brief to each response brief filed. To facilitate this, the body shops were given two additional weeks to prepare and file reply briefs, as it was agreed preparation of twelve reply briefs could not be accomplished in fourteen days.

Subsequent to filing reply briefs, the Circuit Clerk’s office notified body shop counsel only a single reply brief should be filed, the multiple briefs should be consolidated and this motion filed.

The Appellants complied with the above directions. Subsequent thereto, Appellants’ counsel was again contacted by the Clerk’s Office regarding purported deficiencies. Upon discussion, it was discovered that Eleventh Circuit Rule 28-3, which sets out specifically what is required for the contents of a Reply brief, is incomplete. Thus, although Appellants complied with Rule 28-3, the Clerk’s Office has directed this motion and its attachments be amended as per their instructions

The body shops therefore move this Court for leave to amend/correct the
Reply Brief. A copy of the proposed amended/corrected reply brief is attached hereto following the body of this motion.

The body shops further request an extension of the word count limitation
for reply briefs. In their response briefs, the Appellees raised multiple arguments
neither noticed pursuant to a notice of cross-appeal, nor raised in the Appellants’
consolidated brief. Although these arguments are arguably not before the Court on appeal, the body shops have addressed them out of an abundance of caution as the only other option leaves the matters without response.

Missed deadlines have hurt the Parker case before. On April 27, the shops objected to Magistrate Judge Thomas Smith’s recommendation that most of their case be dismissed with prejudice. But the shops’ objection missed a deadline and was too long, both deficiencies coming without any petition that the court allow those exceptions, and so the Middle District of Florida ultimately struck it from the record at the insurers’ request.

The shops’ stricken objection greatly expanded on the number of steering (“tortious interference”) allegations, perhaps more than any of the sister cases. Insurers argued that it was legally impermissible to produce a bunch of new claims in an objection, that they still weren’t named at all (Fireman’s Fund) or that the alleged steering raised in the new batch of allegations didn’t work anyway (GEICO).