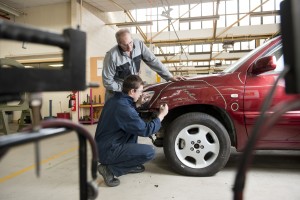 A new industry survey reveals technicians are continuing to get older — but richer.

The workforce details revealed by the I-CAR-Collision Repair Education Foundation study show the tech shortage as well as the incentives shop owners and managers have used to hire and retain the lifeblood of their business. More than 630 auto body shops responded to the research, conducted every three years.

This might reflect a difficulty in filling vacancies rather than a pullback from growth, as the number of medium and large shops grew between 2013 and 2016, according to the survey. The 2016 survey also found shops needing an average of 0.9 entry-level technicians and 1.7 experienced techs.

The research found a reshuffling of benefits between 2013 and 2016, with a tangible decrease in the number of businesses offering health insurance. The lack of such a major perk might seem odd given the aggressive competition to hire techs. However, it might reflect Democratic President Barack Obama’s health care program coming online and offering another outlet for employees to gain insurance — it’s less crucial that one’s job offers it.

The number of shops offering no benefits at all fell from 7.5 percent in 2013 to fewer than 3 percent in 2016. In 1995, 19 percent of collision repair businesses lacked benefits.

Some of the money saved by owners on health insurance might have still gone to employees in the form of higher salaries. The average production technician made $53,857, up from $52,997 in 2013 — but still lower than inflation. However, 28 percent of technicians made at least $70,000 — nearly 10 percentage points higher than in 2013.

“There is a wealth of knowledge that can be learned from this year’s survey results,” CREF Executive Director Clark Plucinski said in a statement. “We were fortunate that such a good cross section of our industry responded, giving information that will help all of us plan for the future.”

2013 Snapshot of the Collision Industry Survey