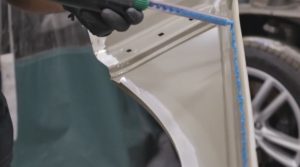 But failure to adhere to those repair procedures and pay attention to detail during such joining can lead to big problems for the repair or technician, according to the on-screen panel of SCRS Vice Chairman Kye Yeung (European Motor Car Works), board members Tim Ronak (AkzoNobel) and Michael Bradshaw (K&M Collision) and frequent contributor Toby Chess (Kent Automotive). The video conversation on structural adhesives was the first in a new SCRS educational film series; other videos will be posted on YouTube through the course of the next three quarters.

Chess gave the example of a 2011 BMW 3 Series quarter panel attached by rivets and adhesive. (Typically, he said, OEMs will pair adhesives with welds or rivets to prevent shearing.)

“If you weld it in, you have the potential of having the car’s corrosion protection warranty voided,” Chess said. Even worst, the repairer might have to buy back the luxury car.

Structural adhesive application itself was “fairly easy,” Chess said. However, Yeung cautioned that a shop should consider having more than one technician on hand for a smoother joining and for everyone to know his or her role ahead of time. He recommended a shop hold a dry run to ensure technicians can apply the adhesive and join the parts within the time limit set by the car or adhesive manufacturer.

In this vein, Bradshaw suggested test-fitting the part before applying the adhesive and starting the curing clock ticking. Otherwise, a shop might have to redo the procedure.

Once the adhesive is curing, the parts have to be left alone, according to Yeung.

“It’s not something you want to do in a high-traffic area,” he said.

If you have to move a part, “slide it,” Chess said. Too often, a technician will pick up a part and compromise the uncured bond itself. Ideally, a part should be left to fully cure before it’s moved at all, Bradshaw said.

Cure times vary by OEM, and those durations can be found on tech sheets along with other considerations like protective equipment and curing temperatures. Chess also observed the role of protective equipment in shielding technicians from “toxic gases” from an adhesive that crossed a certain heat threshold or from isocyanates within the chemicals.

Heat can help cure adhesives more quickly, but it also carries the risk of such gases or broken adhesive bonds at particular temperatures — even with heat not intended for the adhesive itself. In an exterior repair, Bradshaw said, welded stud pins which reach 1,500-2,000 degrees could break the adhesive bonds behind the panel — or even ignite the foam or adhesive within — if the technician isn’t careful.

“There’s not a way to replace that bond without removing the panel,” Bradshaw said.  He said K&M Collision has post-repair-inspected many vehicles in which repaired quarter panels were accompanied by burnt adhesives and damage to the wheelhouses, which frequently rely upon adhesive bonds.

Surface preparation also matters for adhesives and can vary by OEM, according to Bradshaw, Yeung and Chess. (And as for what not to do, Chess remembered a shop which painted a quarter panel before gluing it on the car — and the rear window came off on impact, as the adhesive hadn’t bonded correctly to the substrate.)

For example, some OEMs will want the substrate’s e-coat removed, Bradshaw said. Others won’t.

Not surprisingly, OEM requirements also extend to the type of adhesive. Some OEMs will direct shops toward one or multiple aftermarket adhesives. Others such as European automakers will require the purchase of a particular adhesive from a dealership, according to Bradshaw.

“They’ve had an adhesive produced to meet their spec,” he said.

“Be careful when you substitute a product,” Yeung said.

“The technician can’t just go to the adhesive cabinet and grab a tube of adhesive and ‘All right, let’s go,'” Bradshaw also said.

The beauty of following OEM guidelines is that you can be fairly secure they’ll work. As discussed earlier, OEMs can and do test the crashworthiness of their repair procedures before issuing them to the industry. That provides a nice peace of mind for the repairer, OEM, customer — and the shop’s attorneys.

“You need to follow what your OEs say,” Chess said. “Some say, ‘You will use this type of adhesive. It’s been tested, and its what we want on our cars.’”