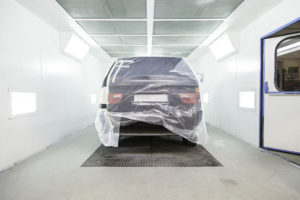 It’s important for a painter to “know your booth” in terms of air flow, a Global Finishing Solutions trainer advised in a GFS-Auto Body Repair Network-Automechanika webinar last month.

Besides the macro-level different styles of booth like downdraft, semi-downdraft and crossdraft, even two identical booths “for whatever reason” will have slightly different air flow, GFS auto refinish technical adviser Jason Garfoot said.

“Know how the air’s moving in there,” he advised painters. Often, paint companies will help a shop even test out the air flow in a booth, such as with little smoke devices.

How the air moves through the booth and the car’s relationship to it can dictate whether an unsuspecting painter will have to redo their work, according to Garfoot.

For example, on a downdraft booth, a vehicle on which both fenders are being sprayed can experience incomplete drying if not centered over the pit, Garfoot said.

That can lead to “huge problems,” particularly on waterborne paint, Garfoot said.

Failing to have identical air flow on both sides can also throw off the “crazy effects” found with modern paint jobs, according to Garfoot.

In another situation where both fenders are being painted and paint-matched to the hood, an asymmetrical air flow can lead to one side of the car looking different than the other when finished, Garfoot said. Centering the vehicle can lead to good, even air flow.

In a crossdraft booth, “know your repair before you even pull it in,” Garfoot advised.

Garfoot gave the example of spraying a replaced fender being blended to the door. Always have the blended panel facing forward, he said.  Otherwise, on a vehicle with heavy-metal or pearl effects, overspray might drift over the blend panel to the back of that panel without the painter noticing, he said.

After the vehicle is clear-coated and the masking pulled, the painter might be dismayed to find the overspray now means the blend-panel door doesn’t match the rear door or quarter panel — and now another panel must be sanded.

“An insurance company is not going to pay for that,” Garfoot said.

Some shops even charge the painter for such an error, according to Garfoot. “They’ll definitely learn quick,” he said.

Garfoot described booths as typically having a slightly positive air pressure, which prevents dirt from entering the booth through cracks or other small holes, according to Garfoot. He said this should be further leveraged by leaving the booth running and the air pressure positive when you bring a vehicle in or out.

“It seems odd to (painters) to turn a booth on that’s empty and then open the doors wide open,” he said. But positive air pressure means that air from inside the booth is being forced out, rather than letting external air — and the dust it contains — be sucked into the booth.

Clogged filters on positive-pressure booths can however push overspray out of the booth into the rest of the shop — where your colleagues aren’t protected at all from the dangerous isocyanates in paint.

A booth monitoring system or installed manometer examining air pressure will also give shops a hint of when to change exhaust filters — filters will show higher than usual pressure as they clog.

Garfoot gave the example of a paint booth whose manometer reads 0 when the booth is off. Running the booth with new air filters will give the shop a sense of whatever the baseline air pressure is. When the booth’s manometer reads about 0.5 above the clean-filter pressure, it’s time to change your filters, Garfoot said.

Otherwise, clogged filters on positive-pressure booths can push overspray out of the booth into the rest of the shop — where your colleagues aren’t protected at all from the dangerous isocyanates in paint.