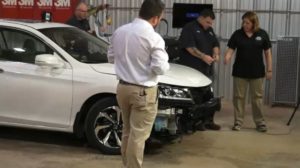 What appeared to be a simple, high-CSI, under-$3,000 auto body repair on a 2016 Honda Accord contained a variety of errors that basic collision repair SOPs would have prevented, experts argued on the February “Repair University Live.”

The Collison Hub broadcast Tuesday featured post-repair inspections on the 2016 Accord and a 2011 Nissan Armada to demonstrate both what to look for and what bad work will be brought to light by such quality checks. (Subscribe to the $30 year-long series here and see the January and February broadcasts here.)

Shops complain of OEMs “‘building cars to total loss,'” host Kristen Felder observed, but she and co-presenters Larry Montanez, Jake Rodenroth and Roger Cada indicated that sloppiness, not automaker repair complexity was to blame, particularly in the case of shoddy wiring work that failed to follow shop-friendly Honda electrical guidelines.

“This is a perfectly happy customer,” Felder said of the owner who agreed to let their car be a Repair U guinea pig. The owner gave the shop all 10 out of 10 customer satisfaction scores for the work on the Accord, which had suffered “really light damage” and received an estimate for below $3,000, according to Felder.

The car appeared only to need work on a bumper cover and a “few auxillary parts” and was in and out of the shop in a couple of days, she said. It was mostly bolted parts, and “What could have possibly gone wrong with this repair?” she said. Montanez (P&L Consultants) said an initial glance found discoloration between the fascia and fenders, which was “not such a big deal, and no one dies because of a color mismatch.”

“But everything leads you to something else,” he said. Further inspection revealed different-sized gaps between each headlight and the hood, the underside of the bumper not painted, and “some very rough spots” on the bumper fascia’s paint job.

The bumper beam itself wasn’t painted, and it had one bolt that was loose, “basically finger-tighened,” he said.

One or two problems — hey, people are human. But start registering more mistakes, and eventually, “now you’re talking carelessness,” Montanez said. Multiple errors send up a red flag for a post-repair inspector, according to Montanez; a look at other work by that shop or technician will likely show “you’re not repairing anything the right way.”

Noticing that the bumper reinforcement beam was replaced, the inspectors decided to check behind the fascia, which itself was missing two clips and sporting a different type of clip on the top.

“That’s not right,” Montanez described the reinspectors’ reaction to what was behind the cover.

Montanez, who testifies as an expert witness, hooked up a different scan tool than would be used by a body shop — one designed for accident reconstruction. It found that the Accord had been traveling 35 mph, decided that a crash was imminent, and activated the ABS for the last two seconds before the collision. The Accord hit the other vehicle at 17 mph, for a -6 mph delta-V (change in velocity due to the impact).

The Accord seemed on the surface to have minimal damage, but a 17 mph crash is nothing to take lightly.

“Visual indications of damage on the car aren’t necessarily indicators of the speed or the severity of the impact,” Felder said. “… (17 mph) warrants some serious consideration.”

No line items indicating pre- and post-repair scans appeared on the estimate, but there were some indications the vehicle was scanned and the codes cleared without solving the underlying issues.

“Somebody cleared the faults out,” said Rodenroth (Collision Diagnostic Services), who scanned the vehicle with an OEM diagnostics tool using his company’s asTech. Nevertheless, he still found several diagnostic trouble codes as well as a trail indicating some of what the other shop had done.

Felder speculated that the code-clearing was perhaps done with a inadequate aftermarket “tool truck” or eBay diagnostic device, and the technician might have even “thought he did a good job” but didn’t.

One of the worst errors made involved the shop’s failure to recalibrate the occupant classification system, something that Rodenroth indicated was detected in his own diagnostic check.

Because of the lack of recalibration, the empty passenger seat still registered a weight of 3 pounds. That means the airbag would deploy for children who weigh less than the threshold for an airbag to fire safely — the car thinks the child is 3 pounds heavier than their actual weight. For smaller children, an airbag can be deadlier than the crash, which is why OEMs — under a government mandate — design systems like this.

You can’t necessarily calibrate the seat sensors with just an aftermarket tool, according to Montanez.

“The seat-type stuff is proprietary,” Montanez said. A shop needs OEM software and weights to calibrate the system, he said. (Rodenroth pointed out that different OEMs address the issue in their own way; some might not even require the recalibration.)

In other electronics issues, the shop had apparently ignored not only Honda’s wire splicing (or damaged wire harness replacement) procedures but the fact that Honda sells wire repair kits that the shop could have billed for.

“They didn’t even do a good bad job,” Montanez said. The shop didn’t use shrink-wrap, waterproof crimp connectors demanded by several OEMs; it just used regular crimp connectors, which Montanez called the “biggest problem” besides the uncalibrated airbag sensor.

“This could have caused a fire,” Montanez said. The wiring was spliced “exactly together” and was barely taped, and wire could have gotten inside and sparked a blaze, he said. Other wiring mistakes (it was unclear if they applied to the specific Accord repair) can include too long or too short a harness, either of which changes the resistance, or splicing wires together in a way that actually changes the input, according to Cada and Montanez.

On the plus side, a Matrix Wand measurement of the Accord — just a few minutes of work — “found everything in perfect spec” despite the bumper beam replacement, Cada said.

Montanez called both the Accord and the Armada prime examples of the fact that “It never is the insurance company’s fault.”

“I don’t care what anyone says,” Montanez continued. The shop owner made a choice to perform the repair in this fashion, he said.

The Accord repair “should have been really easy to do,” Felder said. But the shop failed to access repair procedures before the work (or at least failed to follow those procedures) and failed to pre- and post-repair scan the car correctly (or at least act on their findings). There were no aftermarket parts to complicate the repair — it had a new OEM bumper cover, bumper reinforcement, headlamp and fog lamp, Montanez said. The OEM provides repair-friendly instructions and sells wiring kits to make electronics repair easier.

By doing so, the shop “set our customer up for failure,” she said.

What appeared to be a simple, high-CSI, under-$3,000 auto body repair on a 2016 Honda Accord contained a variety of errors that basic collision repair SOPs would have prevented, experts argued on the February “Repair University Live.” (Screenshot from Collision Hub video)

Scan results from a 2016 Honda Accord whose post-repair inspection was featured on “Repair University Live.” (Screenshot from Collision Hub video)

What appeared to be a simple, high-CSI, under-$3,000 auto body repair on a 2016 Honda Accord contained a variety of errors that basic collision repair SOPs would have prevented, experts like Kristen Felder argued on the February “Repair University Live.” (Screenshot from Collision Hub video)