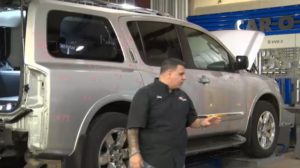 Even a shop certified by the OEM can make a hash of a vehicle if the staff fails to follow repair procedures; perform quality control checks; or properly measure, scan and plan the repair, a group of “Repair University Live” reinspectors concluded.

“If the culture does not buy into a process … the customer loses,” said Roger Cada (Accountable Estimatics), who along with Kristen Felder (Collision Hub), Larry Montanez (P&L Consultants) and Jake Rodenroth (Collision Diagnostic Services) examined a botched 2011 Nissan Armada repair on a Tuesday broadcast.

In this case, the shop was “arguably probably one of the best of the state,” said Felder, who described the non-direct repair program facility as certified by several OEMs, including European ones.

But still, it apparently delivered substandard work on the Armada, a vehicle that Montanez pointed out was fairly vanilla, without exotic materials or a weird, “highfalutin” European design. The shop can’t blame the insurer either, he pointed out — the carrier paid for a new OEM quarter panel, not a used or aftermarket one which would have potentially introduced other variables.

“We can’t even fix a steel car correctly,” Montanez said.

Unlike a happy customer’s 2016 Honda Accord reinspected for the February edition of the Collision Hub show, the 2011 Nissan Armada was a reinspection candidate with a customer complaint, according to Felder on the Tuesday broadcast. (Subscribe to the $30 year-long series here and see the January and February broadcasts here.)

“She’s had nothing but issues,” Felder said.

Cada said the Armada displayed numerous electronics issues, which the shop dismissed as unrelated to the repair following a rear passenger-side impact.

“I can’t stand when people say, ‘Oh that’s not related to the incident.’ OK, why? ‘Well, it’s just not.’ What’re you basing it on?” Montanez said. The same went for people who attempted to deduce proper measurement or a lack of structural damage based solely on eyeballing the car.

In this vein, he later also cautioned that while visual indicators on the rear of the vehicle could signal damage during an inspection, the converse isn’t true for the front: Correct panel gaps there doesn’t prove you anything, he said.

“This isn’t the 1970s,” he said. Crash energy can move things around “dramatically” without shifting gaps around — particularly on open-rail vehicles like European cars, he said. Shops have to measure before a repair.

A superficial inspection revealed a “dead” paint job, crooked sensors and a lowered bumper — “Why is the bumper being forced down?” as Montanez put it — all potential indications of other carelessness or mistakes.

Collision Hub: Mistakes on reinspected 2016 Accord could have been prevented easily

Despite being back to the dealer several times, the vehicle had some electronics issues — which a shop should have known to be on the lookout for, Rodenroth argued.

The car obviously was in a collision, he said; what does Nissan say to do when this happens?

Well, besides seat belt equipment and scanning in general, the battery disconnect procedures — obviously necessary, since a quarter-panel is a welded-on part — remind a shop to reset various electronics systems, he said. Montanez reminded that any welding — including just pins to manage panel dents — is going to require a battery disconnect, which means various system faults and calibration demands are going to surface even for cosmetic work.

More crucially for this specific Armada, a battery disconnect also requires a steering angle sensor reset — which is important for systems like braking and traction control, not to mention the steering display in the backup camera, according to the inspection team.

Three of the four fault codes Rodenroth discovered in the Armada were related to the shop’s apparent failure to recalibrate the steering angle sensor. The fourth was related to the air conditioning being disconnected as part of the reinspection process.

“We’re fixing rolling computers,” Felder said. Rodenroth pointed out that the specific Armada’s trim added numerous elaborate electronics a shop will have to identify — get the build data — and handle properly.

“It’s not just today’s cars,” Felder said. The Armada is right at about the average age of a vehicle being repaired — 6-7 years. So for the shops which wonder if an OEM-mandated procedure (like scanning) is really necessary if the car’s older — “yes, you have to do it on that one too,” she said.

As for traditional body work, the shop sectioned the B-pillar and the quarter panel in the wrong locations, said Montanez, who also reported backing plates with “extensive” corrosion. Besides compromising the crashworthiness of the vehicle, sectioning in the wrong location could also ultimately produce a fire given the foam in those areas, Cada observed.

“This shop could possibly wind up buying this customer a brand new car,” Montanez said. 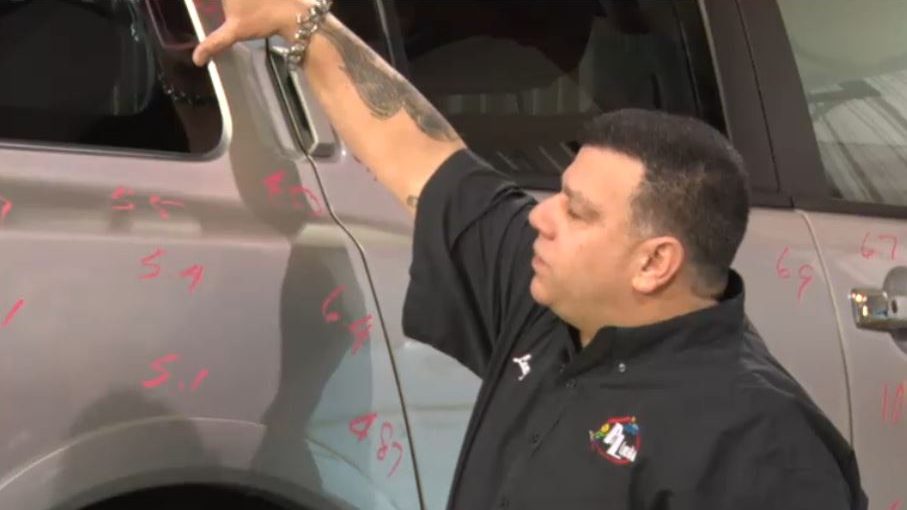 Though he said further testing would be necessary, Montanez said that the outer wheelhouse also didn’t show any signs of the replacement listed on the estimate — which could even raise questions of fraud (or forgetfulness, which also looks bad).

At this point, it was clear the Armada was botched, and the next step would be to measure the vehicle, Montanez said. Measurement found the rear rails bent twice.

The front also had a number of measurements off, he said.

“The frame has some issues to it,” Montanez said. He said the Armada was likely unsafe to drive.

However, he cautioned that at this point, he didn’t know enough to say whether the frame damage was related to that particular collision incident. (In any case, the findings illustrate the need to measure vehicles before a repair.) 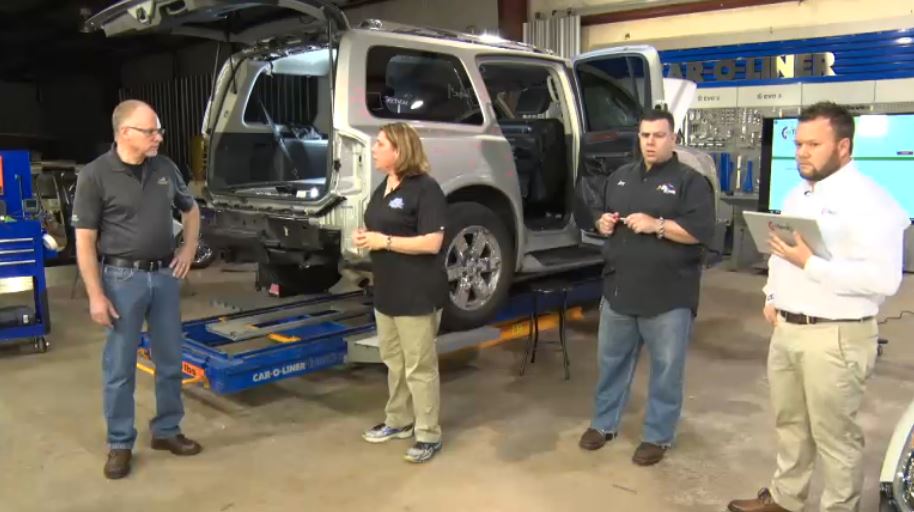 Larry Montanez of P&L Consultants pointed out errors in refinishing during a post-repair inspection of a 2011 Nissan Armada featured on “Repair University Live.” (Screenshot from Collision Hub video)

A post-repair inspection of a 2011 Nissan Armada featured on “Repair University Live” demonstrated a variety of errors. (Screenshot from Collision Hub video)