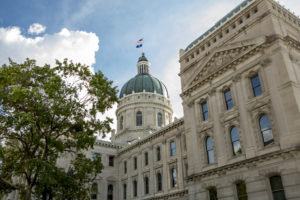 Though the bill’s failure to receive a hearing by a deadline renders the matter moot this session, a measure demanding third-party claimants indicate their choice of collision parts has mixed ramifications for collision repairers.

The measure, sponsored by Rep. Matt Pierce, D-Bloomington, adds third-party claimants to existing Indiana law mandating that insurers in writing secure a customer’s choice of parts for the first six years of a vehicle’s life — the model year plus five. The existing law states, according to FindLaw:

Sec. 8. (a) An insurer that is obligated to pay at least part of the cost of repairing the exterior of a motor vehicle under an insurance policy issued by the insurer may not direct a body shop to repair the motor vehicle until the insurer has presented the insured with a written notice that meets the requirements set forth in subsections (b) and (c).

(b) An insurer described in subsection (a) shall present the insured with a written notice that does the following:

(1) Informs the insured that the insured has a right to approve the type of body parts to be used in the repair of the motor vehicle.

(2) Gives the insured an opportunity, in approving the type of body parts to be used in the repair of the motor vehicle, to select from among the following:

(A) New body parts manufactured by or for the manufacturer of the motor vehicle.

(B) New body parts that were not manufactured by or for the manufacturer of the motor vehicle.

(c) An insurer described in subsection (a) shall give the insured an opportunity to indicate in writing the type of body part that the insured approves for use in the repair of the motor vehicle. (Formatting added.)

“No one ever chooses option b or c, because who in their right mind would?” IABA President Doug Martin said Monday.

With third-party claimants, however, carriers will often write “whatever they feel is most cost-effective” in terms of parts on an estimate, and “it’s a matter of us advocating” for the third-party owner, Martin said.

The bill would help mitigate that issue for those six model years worth of third-party claimants. However — and here’s the kicker — this shouldn’t be an issue at all. A third-party claimant hasn’t contractually agreed to any parts concessions with or received any premium discounts from the carrier of the person that hit them.

In this sense, the bill might effectively strip rights from that third-party owner, by implying that he or she doesn’t get a choice of parts after model year 6. Assuming OEMs are still selling new parts for their vehicle, there’s no contractual reason why an third-party owner with a seven-year-old car should receive anything but new OEM unless they want it.

Martin raised the same question in an interview prior to our learning of the bill’s demise. He said the IABA wasn’t behind the bill, and he wasn’t sure what the rationale for the measure was or what interest prompted it.

“We’’re trying to figure that out right now,” Martin said Monday morning. He said the IABA hadn’t met with Pierce yet.

Seven years isn’t that long, particularly when you start considering factors like the speed of vehicle technology and substrate changes over the past few years. So to perhaps a large degree, this could all be moot very soon.

For example, Nissan won’t guarantee that anything other than a new OEM bumper cover will allow blind spot warnings to work on its vehicles, dating back to what appears to be the 2011 Quest LE.

HB 1559 would have taken effect July 1, 2017.  On Jan. 1, 2018, it wouldn’t matter that a first- or third-party’s 2011 Quest LE is out of the model-year range which demands the extra layer of parts choice verification described in the bill. An Indiana body shop would still be risking liability by sticking an aftermarket or recycled bumper cover on the minivan should that part compromise the blind-spot feature.

Regardless, the bill offers an example of why it’s important to study legislation closely and consider all the possibilities allowed by bill language, whether intentional or unintentional.

Pierce was involved with a heavy Legislative deadline day Monday but would hopefully be in contact later in the week, according to Schorg. Continue to check Repairer Driven News for updates.