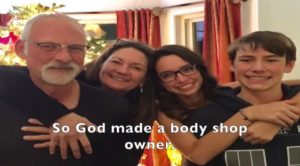 “God said, ‘I need someone willing to spend hours researching the proper repair, submit the estimate, fight with the adjuster, talk to the supervisor, and keep guests protected always. And someone who can deliver the news when a loved car is totaled. … So God made a body shop owner.”

The co-creator of a YouTube video applying Paul Harvey’s famous “So God Made a Farmer” speech to the collision repair industry said he was “blown away” by the response from his peers.

“So God Made a Body Shop Owner” was posted Saturday on YouTube, and as of mid Monday afternoon was up to 1,351 views. The tally rose by a few while we were writing this short article.

“I just wanted to do something nice as an industry piece, rather than just promoting us or something,” said Nylund’s Collision Center owner Robert Grieve, who collaborated with “Experience Pros” radio personality Eric Reamer on the piece. The two men work together on the Nylund’s blog, upon which the video was also posted with this introduction:

Every now and again the winds of inspiration blow through our offices here at Nylund’s Collision Center. And when they do, we are quick to listen – and then act upon it. In today’s case, we were reminded of the things that are important by the classic voice of legendary radio personality, Paul Harvey. Back in 1978, Harvey delivered his famous speech: “God Made a Farmer”.

Today, we present our version, served up as a tribute to all the professionals within the auto body industry. Please enjoy: God Made a Body Shop Owner.

Grieve said he went through “many, many, many Facebook pages of the best of the best” and gave Reamer a “slew of photos” to create the video, which Reamer wrote and Grieve narrates. The idea was to “celebrate what we do” as an industry, Grieve said.

Grieve said the “most heartwarming thing” came when he contacted the photo owners to see if their Facebook images could be used for the film. “Every single person said, ‘Absolutely,'” he said. “They didn’t even know what I was doing.”

“I had a lot of fun with it,” said Grieve, who said the movie contains images that “make me happy.” For example, the church seen in the video is the same one at which Grieve’s late father preached. He also noticed how much community service the industry does.

The response has been strong; Grieve said metrics indicate the film has even been watched abroad –“United Kingdom, everywhere. It’s just unbelievable.” A Scottish repairer whom Grieve allowed to post a version of the video before Nylund’s official post pulled in nearly 410 more separate views in 12 hours, according to Grieve.

“The outpouring was just incredible,” Grieve said Monday, and it included many shops in his local Colorado area as well. He said he didn’t care if his local competition embedded the film on their own sites. The film was his way of giving back, and saying “thank you,” he said.

“We’re an industry, no matter what,” he said.

“God Made A Body Shop Owner”

“So God Made a Body Shop Owner”