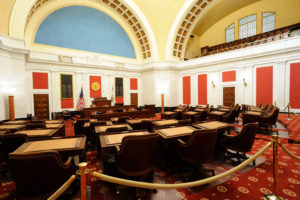 Senate Bill 544 would overturn a 22-year-old requirement that the first three years of a vehicle’s life by default means the car gets new OEM or — following a case that reached the West Virginia Supreme Court — used OEM parts.

Under existing 1995 West Virginia law, if an insurer wants to put aftermarket parts on a vehicle that new, they must receive written consent from the vehicle owner to do so during that time.

The bill, sponsored by Maynard’s Auto World owner state Sen. Mark Maynard, R-Genoa, also modifies a requirement — which appears to have been enacted in the 1990s as well — that customers receive on estimates in 10-point type the statement:

Instead, it would only tell the customer that they were “supplied by a source other than the” OEM and that the aftermarket parts have their own warranty.

That’s a big difference, particularly in removing the caution about affecting the vehicle’s warranty. The new language would eliminate the old disclaimer and replace it with this notification:

Maynard, whose company touted low-cost aftermarket hoods, fenders and mirrors in a 2015 Facebook post, did not return phone and email messages left late Monday afternoon seeking comment. However, in a recent Facebook post, he wrote: “This bill only (gives) the consumers (the option) to choose aftermarket parts to possibly help save on the deductible on cars that are still under factory warranty, and holds the aftermarket part company to the same warranty standards.”

The customer already has the choice of aftermarket parts under the existing law; Maynard’s bill removes a requirement that they confirm that choice in writing.

As Hunter Bale of Bale Chevrolet observed to KATV about the similar Arkansas bill: “From a consumer standpoint, there is no sense that this law makes. It’s just removing a level of protection for the consumer.”

Maynard’s deductible-savings reference is unclear, as an auto insurance deductible must be paid in full before insurer reimbursements kick in. It doesn’t matter whether a, say, $500 deductible buys OEM or aftermarket parts; you’ve still got to spend $500 out-of pocket. Though for claims below or equal to the deductible threshold (a questionable but possible decision) or purely out-of-pocket work, he’d be correct.

“We feel it’s a safety issue,” Lemmon said. “We feel it’s also a concern about their investment, and we worry about how this could impair the quality of the vehicle and the safety of the consumer.

“We don’t feel this is good public policy,” she said later. Lemmon recalled that body shops were represented during the discussion over the original law years ago, and they demonstrated the difference between OEM and aftermarket hoods.

“When you saw the safety issues that were involved for the consumer, it became apparent that this could really be an issue that could impact the safety of vehicles,” she said.

Besides that, whenever non-OEM parts didn’t fit, it “drives the cost of repairs up significantly,” she said.

As a shop owner observed regarding the Arkansas bill, the West Virginia bill would make it easier for insurers to slip aftermarket parts past third-party insurance claimants, who are under no obligation to accept aftermarket parts when a carrier’s policyholder hits their vehicle. Under the current West Virginia law, they’d have to agree to imitation parts in writing — and why would someone with a car so new want anything else?

For that matter, would any West Virginian reasonably feel it’s acceptable for an insurer to demand any customer with a 2015, 2016, or 2017 vehicle receive an imitation part? (There’s also a strong case for a broader model-year restriction given vehicle technology, as we examined here.)

Lemmon called the three-year span “a very fair insurance for the consumers and their investment.”

The West Virginia bill also would make it easier for an insurer or shop to slip such aftermarket parts past first-party claimants as well, as customers might not necessarily read or the 10-point type notification on the estimate — which would be rewritten with arguably misleading language anyway. Under the existing law, the written consent requirement means the customer can’t help but know what’s being installed on their vehicle. It’s active notification rather than passive notification.

SB 544 does require aftermarket crash parts to “have a warranty equal to or greater than the remainder of the original manufacture’s part warranty” and demands that a customer immediately get genuine crash parts should the aftermarket manufacturer or supplier fail to honor their warranty. However, a failure of the aftermarket part might end up being a hassle for a customer, shop or insurer to rectify in a way that wouldn’t happen with an OEM part warranty. More on this here.

The bill’s language does seem to put heavy pressure on the insurer and aftermarket manufacturer/distributor to get an aftermarket part right the first time, making it law that:

(b) If the aftermarket part specified by the insurer does not result in the vehicle being repaired to its condition prior to the loss, the insurer shall specify the use of a genuine crash part.

(c) The motor vehicle body shop shall provide documentation of aftermarket parts that do not meet the requirements of this section as reasonably requested by the insurer. The insurer is permitted to exercise all available rights of recovery against the aftermarket parts distributor.

Unfortunately, this portion also seems to impose a documentation rule on shops to prove their own judgement that a part is substandard rather than force an insurer to prove the part is truly like kind and quality– which completely reverses the two business’ roles in the repair process. The shop, in consultation with the owner, makes repair and parts decisions, not the insurer. An insurer might only have to pay for aftermarket or recycled parts — but the parts must be equal to the originals.

It also gives insurers the ability to “exercise all available rights of recovery against the aftermarket parts distributor,” which sounds utterly redundant — lawmakers are voting to tell insurers they can use their existing rights. This line seems another example of getting the repair process backward, as it’s the shop that orders and is stuck with the logistics of returning parts. They can certainly bill the customer for the trouble, who can subsequently demand reimbursement by the insurer, but it’s perhaps more of an indirect connection than the bill suggests.

Granted, the West Virginia attorney general went after both insurer Liberty Mutual and direct repair program shop Greg Chandler’s Frame & Body for sticking recycled parts on a vehicle without notification to the vehicle owner — a loophole that still remains in the law, even for late-model vehicles.

The West Virginia Supreme Court in 2014 ruled that the Legislature’s intent was to single out aftermarket imitation parts and decided the case in favor of the shop and insurer. It concluded recycled OEM parts were different than aftermarket ones, and if the West Virginia Legislature had wanted to add recycled OEM parts to the requirement — even if they could potentially affect a warranty — then it should have done so in the law.

“If it had wanted the statute to apply to salvage/recycled OEM crash parts, the Legislature could have easily done so—as it did with aftermarket crash parts,” the court wrote. “It is not this Court’s prerogative to here legislate additional coverage in a statute that is expressly self-limiting. We therefore decline to do here what the Legislature did not.”