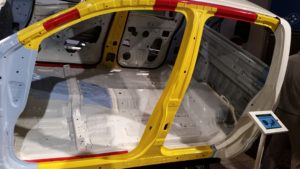 Vehicles with “special materials” — such as higher-strength steels, aluminum, magnesium and carbon fiber — have exploded from 3 percent to nearly 18 percent of Mitchell’s estimates over the past five years, the company reported this month.

The data contained in Mitchell’s latest free quarterly Industry Trends Report indicates that vehicles with such substrates posted $428 higher severity than the entire fleet of cars estimated in Mitchell’s database — a 14.5 percent difference.

Severity used to be even higher on vehicles with more advanced materials, according to Mitchell’s data. In 2012, it meant paying an average of $575 more per repair compared to the average severity across all estimates.

Study author Hans Littooy, Mitchell vice president of consulting and professional services, said that while he hadn’t validated it empirically, his hypothesis for the materials-related severity drop centered around the types of vehicles sporting advanced materials.

He speculated that in 2012, estimates involving such substrates largely were for higher-end vehicles, which were being repaired in higher-end shops charging higher-end prices. By 2017, more mainstream cars contained such materials and were being taken to conventional body shops, including those in direct repair programs who’ve agreed to even lower charges with insurers. Littooy said Mitchell’s analysis only examined “special” types of “structural materials” — which means basically everything not mild steel. Specifically in terms of steel grades, the analysis appears to have considered strengths starting at high-strength, low-alloy to be “special materials.”

He said the study’s definition of “structural materials” included not only the body-in-white but also elements like closures, panels and bumper beams which have been incorporating more materials like aluminum. However, the research didn’t count powertrain components like aluminum engines, nor did it include aesthetic elements such as carbon fiber inside a vehicle cabin.

Time lags and the future

Mitchell’s statistics about prevalence and increased severity are likely only the beginning. That’s because a) lightweighting is expected to continue and b) materials data from 2012 and 2017 estimates doesn’t really reflect 2012 and 2017 model-year cars.

The average repairable vehicle entered into fourth-quarter 2016 Mitchell estimates was 7.09 years old. Using that statistic for some rough back-of-the-napkin math suggests shops and insurers in 2012 were really working on vehicles from the 2005 model year. By 2017, collision repairers and insurers were finally working on models from 2010. By 2022, the 2015 models — including the 2015 aluminum F-150 — will be in full force in shops and things really get interesting. To get a sense of what this time-lag means from a materials perspective, check out the differences between the 2005, 2010, and 2016 Impala through General Motors’ free body repair manual website. (The 2015 Impala manual isn’t on the site, but 2016 is part of the same design generation and will work well enough for our purposes even if it doesn’t have as nice a ring to it.)

Remember, shops and insurers are on average repairing and paying for the 2005 editions in 2012 and the 2010 models today. Littooy recalled interning at a General Motors assembly plant working on the Chevrolet Caprice. He said he owns a 1969 Chevelle, and it’s “remarkable how similar” the two were from an assembly perspective — even separated by 20 years.

But 25 years after the Caprice, “you can’t even recognize” how GM was assembling its vehicles, Littooy said.

“I think that’s what catching up with the industry,” Littooy said. Even 5-10 years ago, cars were being built the same way. But within the last five years, “we’re seeing an explosion” of more technology and advanced assembly methods than ever before.

“Five years from now, who knows what it could be,” he said.

Mitchell fourth-quarter 2016 data on the average repairable vehicle contained in its estimates is shown. (Provided by Mitchell)