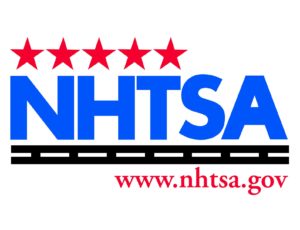 The National Highway Traffic Safety Administration has cautioned OEMs that it might consider “predictable abuse or impractical recalibration requirements” over the life of higher-tech vehicles a safety defect — a position with positive and negative connotations for collision repairers.

“Other commenters suggested that while automated safety technologies may facilitate increased safety, manufacturers should ensure that over the lifespan of the vehicle such technologies themselves do not create unreasonable risks to safety due to predictable abuse or impractical recalibration requirements. The Agency agrees,” the NHTSA wrote in formal Sept. 23, 2016, guidance to OEMs about automated safety technology. “Unreasonable risks due to predictable abuse or impractical recalibration requirements may constitute safety-related defects. … Manufacturers have a continuing obligation to proactively identify and mitigate such safety risks. This includes safety risks discovered after the vehicle and/or equipment has been in safe operation.”

The NHTSA cited the “Wheels” case, in which a U.S. Court of Appeals ruled that GM should have planned for the contingency of owners overloading trucks or performing other towing under less than pristine lab conditions.

“These statements underscore the realities of operation owners do not always know or pay close attention to the weight of their cargo, and are not always scrupulous to make sure that tires are inflated to specified pressures, and loads carefully balanced front-to-back and side-to-side,” the D.C. appellate court wrote. “The reality of day-to-day operation embraces some to-be-expected overloading of the vehicle and overinflation of the tires, and this provides the proper context in which to evaluate vehicle performance.

The NHTSA, like the court in 1975, is saying that should the OEMs need to consider how the real world interacts with its vehicles. 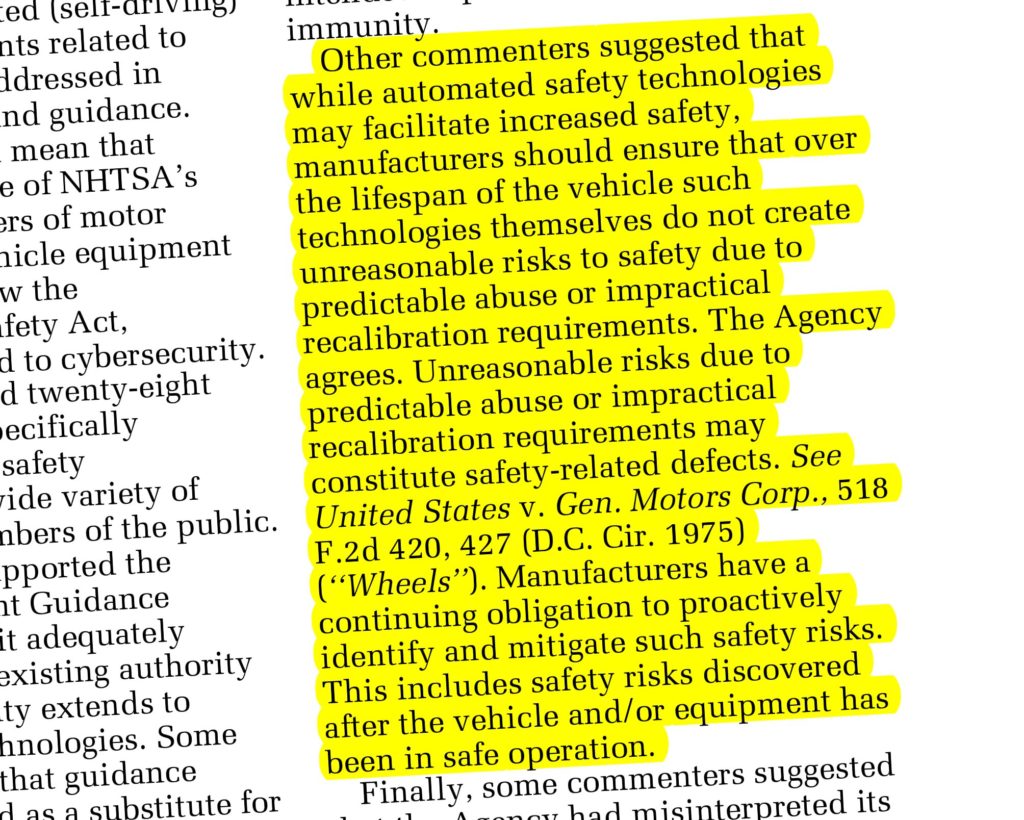 In this case, it appeared to agree at least in spirit with alignment systems manufacturer Hunter Engineering, whose Executive Vice President Nicholas Colarelli submitted comments May 2 asking the agency to demand calibration standardization. According to Colarelli, the expanding number of OEM-specific calibration equipment, facility and task demands would result in shops making mistakes or flat-out intentionally neglecting to do the work.

When service or repair facilities are unaware of, or are unable to properly perform, the increasingly diverse range of safety system alignment or calibration procedures required by vehicle manufacturers across a multitude of different vehicle makes and models, vehicles may be returned to the road in unsafe conditions, having individual safety system components which are functionally operative and defect‐free, but which are improperly calibrated. As a result, the number of unsafe motor vehicles on the roads will increase, posing additional risk of accidents, injuries and death. Such situations could be considered to be a “predicable abuse” of the vehicle safety system, where the abuse is the intentional (or unintentional) failure to properly align or recalibrate the vehicle safety system when required due to changes in the motor vehicle associated with adjustments to non‐safety system components stemming from a lack of knowledge, lack of equipment, or lack of practicality on the part of the vehicle service provider.

“We’re doing our best to raise awareness,” Hunter alignment senior product manager Kaleb Silver said in a November interview. One of his company’s main customer bases — tire shops — will be particularly affected; a once-routine procedure like wheel alignment now often will demand a separate ADAS system be recalibrated. But OEMs have different procedures, which could lead to confusion, higher capital equipment demands and higher repair bills to recoup that equipment (and training).

Hunter typically isn’t involved in legislative matters itself, and so while “we’re happy to help,” it’s working on the issue with more governmentally savvy groups.

“We would love to see a standard developed,” said Silver.

Besides standardization, the industry also needs a “way to test functionality,” Silver said. Did the calibration performed actually work, and is it now safe to use ADAS feature X or switch the car into self-driving mode?

“That’s a big piece that’s missing from all this,” Silver said.

“The (Massachusetts Right to Repair) bill and subsequent national R2R (Memorandum of Understanding) demonstrate automakers’ commitment to the aftermarket repair community,” he wrote in an email. “Seventy-five percent of all post-warranty auto repairs are done by independent technicians, and the average age of a vehicle on U.S. roads is 11 years old.  Automakers know that independents play an important role in maintaining customer satisfaction, which drives continued sales.”

Asked about the NTHSA guidance, Gage continued: “There was significant NHTSA guidance in Q4 2016; manufacturers are certainly taking all of it into careful consideration.  Legitimate and manageable access to systems for both repairers and owners is important, but recognize that cyber-security, data integrity, and customer privacy concerns present obvious challenges as systems become more complex and vehicle connectivity more prevalent.”

He also referenced a joint letter by multiple trade groups — including the Auto Care Association, Automotive Service Association and Auto Alliance —  asking the Society of Automotive Engineers to explore the secure vehicle interface concept with an eye towards cybersecurity but also “the independent repair community to continue to have access to vehicle repair and service information.”

Hunter: Variety of OEM requirements for calibration could be hurdle for shops

Government recognition of the issue and a more standardized set of procedures should ease the transition to the industry calibrating virtually every repair. (If the wheel alignment guys are going to have to do it on undamaged cars, it’s very likely a car involved in even a minor wreck will need something recalibrated.) The government’s comments also by default suggest it’s open to a diverse aftermarket — not just dealerships, for example — servicing cars. (Of course, this presumes that guidance under the Obama administration will continue under the Trump administration, but as an Auto Care Association lobbyist pointed out, safety isn’t as likely a deregulation target.)

But greater attention to how the aftermarket will affect self-driving cars could lead to more regulation and scrutiny by OEMs and the feds. If the OEM met whatever level of due diligence is necessary to avoid the “predictable abuse” charge, liability and regulatory attention would seem to fall next upon the repair professional were one of these safety systems to fail. That might weed out some bad apples, but even a shop that did everything right might find the process nerve-wracking. (Even if a taxpayer has nothing to hide, it’s not like he or she is going to relish being audited by the IRS.)

And if due diligence demands the OEM take a greater role in educating customers about qualified mechanical and collision shops, then the entire aftermarket should expect some dramatic shifts in who gets the business.