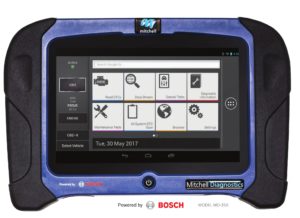 “We researched a wide variety of scan tools on the market and found that the Bosch scan tools provide best-in-class coverage and modern technology, and are backed by great service and support,” Mitchell sales and service Vice President Jack Rozint said in a statement. “In addition, Bosch scan tools have a combination of features that provide outstanding capabilities for collision repairers, including a tool that can do Electronic Control Unit (ECU) reprogramming, as well as optional accessories that include a target system for recalibrating Advanced Driver Assistance Systems (ADAS) and a Tire Pressure Monitoring System (TPMS) kit. We are excited to partner with Bosch given its leadership and expertise in this market.”

A Mitchell brochure states that the system has the ability to program and synchronize keys and other alarm and locking technology, and the ADAS calibration can work with vehicle-specific targets.

Mitchell said the device also “validates” that the VIN displayed on the scan report matches the VIN on the vehicle being repaired.

“This scan report can be used to support repair billing, and offers both carriers and repairers a record showing that the vehicle had a clean scan at the completion of the repair process,” Mitchell wrote.

Rozint explained that one of the biggest concerns insurers have about scanning involves the inability to confirm that their customer’s vehicle was really the one scanned, as competing scan tools all allow manual VIN entry.

But the Mitchell-Bosch device sends a Mode 9 query to the vehicle BUS, which returns the VIN number to the device and the subsequent output automatically, according to Rozint. This allows Mitchell to indicate on the document that the output is “VIN verified” — it came unaltered off the vehicle.

“One of the challenges we have is documenting, confirming, and getting compensated for the scanning that we do in-house,” Bill Lawrence of 1st Certified Collision Group said in a statement. “With the Mitchell Diagnostics system we’ll be able to demonstrate via validation documentation that the work was performed on the vehicle with the VIN matching the insurers’ claim, and we can easily attach that to our repair order and the carrier’s claim file.”

Learn more about diagnostics at SEMA with Repairer Driven Education

Learn another dimension of the diagnostics process with Jake Rodenroth, Collision Diagnostic Services at “Building the Business Case for Diagnostics in Collision Repair” during the SEMA Show in Las Vegas. The Nov. 1 session is part of the Society of Collision Repair Specialists’ Repairer Driven Education Series Nov. 1-4. Register here for the individual class or the series pass package deal.

However, not every model year of every vehicle can return a VIN in this fashion, and Mitchell’s system allow for manual entry in these or other cases. Unfortunately, the output doesn’t have a way of conveying that the shop legitimately had no choice but manual entry because the scan tool couldn’t pull the VIN. The document will simply lack the VIN verification check mark — just as if a shop had manually overridden a VIN pulled by the system.

Rozint said that if this became a constant source of contention between shops and insurers, Mitchell would look into releasing a list of which model years support automatic VIN verification. 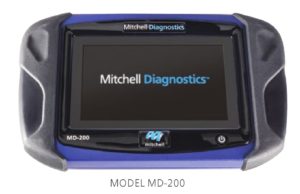 The Mitchell MD-350 (and its little brother, the MD-200) is based on Bosch’s standard scan tool platform, but unlike “virtually every scan tool,” it’s designed with a collision repairer rather than a mechanic in mind, Rozint said.

He said one of the most important features of the Mitchell version was its ability to output explanations of what it found in a format easier to understand by an insurance adjuster or customer untrained in automotive diagnostics and repair.

Other tools can be “really cryptic” and export a dense batch of data, he said, recalling one he tried to do on his own car.

That can make it easier to get paid by an insurer or explain to a customer with a complaint that the vehicle indeed had a clean bill of health when it left, Rozint suggested. However, a diagostics technician can still obtain the more complex output for their own purposes, he said.

The tool also can be integrated as a node on a collision repairer or insurer’s claims, estimating and shop management system software network. Mitchell said its system can produce PDF scan documents and easily add them to any of the major estimating or claims systems, but Mitchell Estimating and RepairCenter users will have “enhanced integration capabilities.”

“Mitchell’s reputation and success among information providers for being a leader in advanced repair technologies made it the ideal choice to bring diagnostic solutions to the collision repair industry,” Bosch engineering and product area diagnostics Vice President Stefan Schmitt said in a statement. “Working with Mitchell will integrate our scan tool directly into the workflow applications used by collision repairers and insurance carriers, which will assist in the diagnostic portion of collision repairs.” 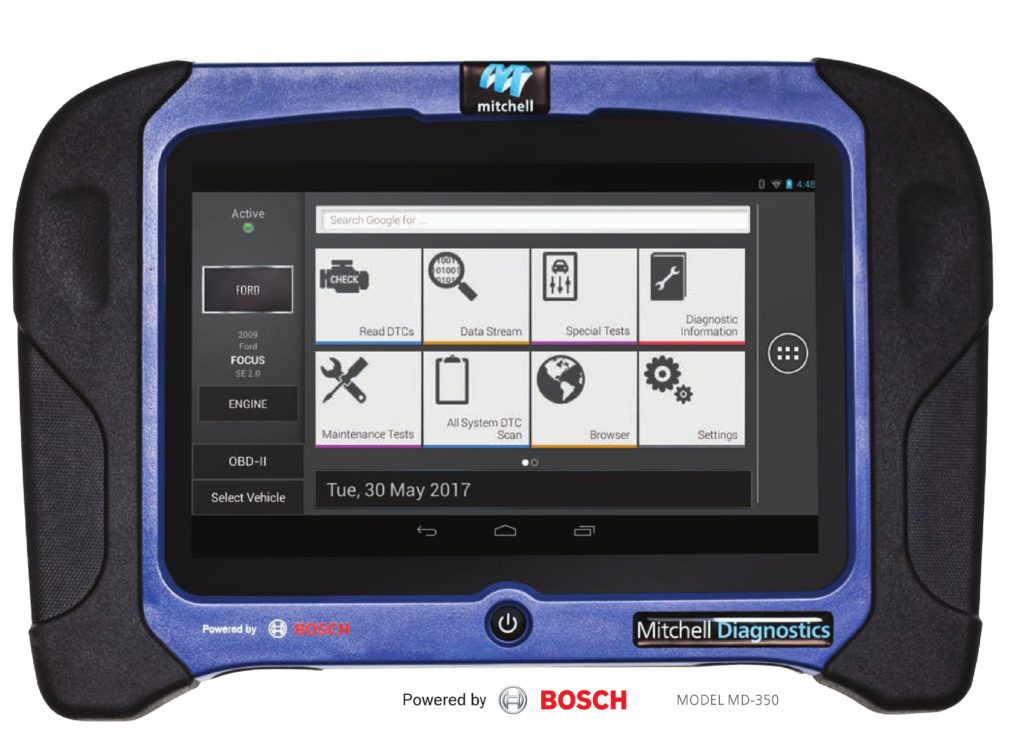 The MD-350 carries J-2534 compatibility, which allows it to reprogram a new module with the factory software, according to Rozint. It also has the capability to recalibrate OEM advanced driver assistance and safety systems, even Chrysler’s smart head restraints, and Bosch through OEM licensing has developed an attractive, convenient generic calibration target system able to work on Subaru, Mercedes, Honda, Kia, Hyundai and Toyota vehicles, Rozint said. (The “not inexpensive” setup will be available in a few months to Mitchell Diagnostics users for an additional charge, Rozint said.)

Like all aftermarket scan tools, the MD-200 and MD-350 aren’t identical to OEM scan tools, even though Bosch also produces those devices as well as other electronics installed within cars today and has “really good relationships with the OEs,” Rozint said. This seems to carry the possibility — particularly if more OEMs go Tesla’s route and update software over the air — that something would be missed or misinterpreted, particularly on a newer-model vehicle.

Asked if Mitchell would indemnify a shop which missed something because of a difference between the OEM and aftermarket scan tool, Rozint said no. “Even an OEM scan tool is not perfect,” he said — even a dealership tool isn’t guaranteed to be always error-free. Given that, he said, it was “not reasonable” for them to indemnify Mitchell Diagnostics users.

Rozint said Bosch is “very busy right now” accelerating its editorial work on late-model vehicles, something Mitchell pointed out a collision repairer needs immediately but a mechanic doesn’t. (A new car can drive off the lot, crash, and seek collision work immediately, but the owner probably won’t use a mechanic outside of a dealership until the warranty runs out years later.)

“The partnership with Bosch on this is just real exciting,” Rozint said. “… They got it right away.”

Rozint wouldn’t disclose specific pricing, directing interested parties to contact Mitchell. He described the cost as “right in the ballpark” with top-tier scan tools, though Mitchell has opted to spread the bill across monthly subscription charges rather than go competitors’ route of embedding the charge within the device’s off-the-rack sticker price.

Earlier this month, Mitchell also announced it would update its estimating software to clarify that scanning, calibration and diagnostics are not included in existing repair times, and added line items so shops could input their own individual values manually.