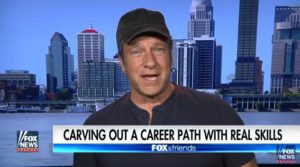 Television and podcast personality Mike Rowe in a “Fox and Friends” appearance Wednesday brought more national attention to the fish-in-a-barrel opportunity for job-seeking Americans to fill millions of open positions in the skilled trades.

The segment starts with some discussion of the meaning of the Georgia U.S. House special election between Republican Karen Handel and Democrat Jon Ossoff (Handel won.). Rowe largely demurs, but observes that anecdotally, it seems as though people are voting for the sentiment that “opportunity is alive and well.”

He then makes a pitch for the skilled trades.

“The single biggest thing to focus on right now is not the creation of jobs, and not the business of bringing jobs back — both of which are obviously important,” Rowe says on the “Fox and Friends” broadcast. “It’s the fact that 6 million jobs currently exist. They’re here, right now.”

75 percent of them don’t need a four-year college degree, Rowe said on “Fox and Friends”

He then gives a nice plug to the national SkillsUSA competition this week in Louisville, Ky., calling it “the greatest kept secret in the history of skilled labor.”

Even if you’re not a fan of Fox News, it’s worth watching the segment just for Rowe’s perspective and articulate, intelligent argument in favor of the skilled trades. Non-Georgians who don’t care about the special election analysis can tune in around the 3:10-minute mark for the meat of the trade jobs discussion.

As Rowe opts not to get drawn into an overly politicized discussion in favor of just talking about work, its the kind of thing you can post on Facebook and hopefully not draw too much of a Internet political freakout from your friends on either side of the aisle.

Which is good, because from an auto body industry perspective, Rowe’s message of “jobs exist” is a crucial one for parents, counselors and students to hear. There’s a tech shortage, shops often lament. The Bureau of Labor Statistics estimated that employers’ demand for auto body and auto glass careers will grow 9 percent between 2014 and 2024, faster than the national growth of 7 percent. Fayetteville (N.C.) Technical Community College, which launched a high-profile collision repair program in 2015, estimated 180,000 jobs will need to be filled in collision repair and insurance over the next few years.

The Fayetteville Observer reported in 2015 that one company has promised to hire as many as the first 20,000 graduates of the Fayetteville Technical Community College’s collision repair program.

Featured image: Television and podcast personality Mike Rowe in a “Fox and Friends” appearance Wednesday brought more national attention to the fish-in-a-barrel opportunity for Americans to fill millions of open jobs in the skilled trades. (Screenshot from Fox News video)