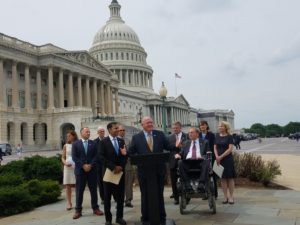 The House on Thursday voted for a bipartisan plan to reauthorize but overhaul a federal program for giving money to state technical education programs, and a Senate leader indicated a companion bill might be coming in that body.

House Resolution 2353 passed by voice vote, which means it was so popular nobody felt it necessary to count yeas and nays. A large bipartisan group of sponsors, led by Reps. Raja Krishnamoorthi, D-Ill., and Glenn “GT” Thompson, R-Pa., backed the new version of the Perkins Act.

The bill lets states use 15 percent of federal funds in rural areas or regions with a lot of vo-tech programs, up from 10 percent, according to a fact sheet published by the House Committee on Education and the Workforce. (That ought to help fund programs to teach more capital-intensive trades, such as collision repair.) It loosens and streamlines the federal strings so states can make their own decisions about the money — and if their own leaders are spending it correctly.

“Today’s vote is a win for the American worker,” Thompson said in a statement. “Given the dramatic evolution of our nation’s workforce, it is imperative that we create clear pathways to education and training for students interested in pursuing careers in high-demand industries and technical fields. As Co-Chair of the Career and Technical Education Caucus, I am proud to join my colleagues in approving the Strengthening Career and Technical Education for the 21st Century Act — a well-engineered, bipartisan reauthorization aimed at permanently closing our nation’s skills gap. This bill will work to restore rungs on the ladder of opportunity for every American regardless of age or background.”

House Resolution 2353 lets education programs “fill out a simple, easy-to-complete local application” instead of “lengthy plans” and seeks to integrate the program with federal laws like the Every Student Succeeds and Workforce Innovation and Opportunity Acts, according to the sheet. That should make for an easier process at the local level, but H.R. 2353 also “encourages state leaders to better integrate their career and technical education services with other state-led programs.”

“I have my own experience with non-traditional education,” co-sponsor Rep. Lloyd Smucker, R-Pa., said in a statement.“I took college courses at night while operating a small construction company during the day. Countless students across Pennsylvania and the nation have similar experiences, and we should make it easier for them to compete in today’s 21st century economy. My district is home to multiple CTE schools, and I’ve heard directly that they want to expand their programs to students who are ready to learn and eager to work. This legislation will help businesses and schools collaborate to ensure students gain the necessary skills to get in-demand, family-sustaining jobs. I am proud to work with my colleagues on both sides of the aisle to pass this legislation, and want to thank Reps. Thompson and Krishnamoorthi for carrying this across the finish line.”

Local leaders also have greater flexibility to dictate what industries get the money in their states, and the bill encourages business owners to participate in the process.

“At a time when thousands of jobs in manufacturing, information technology, and other skilled trades remain unfilled, it is vital that we invest in CTE, which is why I’m pleased that the Strengthening Career and Technical Education for the 21st Century Act passed the House today,” co-sponsor Rep. Jim Langevin, D-R.I., said in a statement. “This legislation aligns CTE programs with industry needs, improves collaboration among community stakeholders, promotes work-based learning, and supports career counselors, all while strengthening federal investment in CTE.”

Oversight of the program is delegated to the states, not the secretary of education — and your input as a business owner is encouraged.

“Current law requires states to negotiate their targeted levels of performance with the secretary of education,” the fact sheet states. “Under the legislation, states will set performance goals through an open process that includes input from local education leaders, parents and students, workforce development boards, community and business representatives, and others.”

This and other elements of the law are meant to avoid politicization and decisions taken out of local hands.

“The bill prevents the secretary from withholding funds from a state that does not meet certain performance targets. Instead, it empowers state leaders to develop an improvement plan that works best for the needs and circumstances in their states. At the local level, improvement plans will be developed in consultation with local stakeholders and overseen by state leaders, not federal bureaucrats.”

However, there’s still a federal level of oversight. States are required to publicly report to the states and feds how they’re doing, which is anticipated to keep everybody honest. It means auto body professionals should be prepared to check these results and raise hell if all their state’s dollars dollars went to underwater basket weaving instead of collision repair or to a collision repair program producing incompetent graduates.

“Under the bill, states will include targeted levels of performance in the state plan, as well as report and annually publish the results on how they perform,” the fact sheet states. “This will provide students, taxpayers, and state and local leaders the information necessary to hold CTE programs accountable for results. Additionally, the bill reaffirms the secretary’s responsibility to provide technical assistance, monitoring, and oversight related to the implementation of a state’s revised performance improvement plan.”

Federal scrutiny of the results will be done by an “independent entity,” again to avoid whichever party’s secretary of education is in power from mucking things up with politics.

“The bill requires the federal plan for research, development, dissemination, and evaluation to be carried out by an independent entity, rather than the secretary of education,” it states. “The bill also requires that future demonstration projects focus on enhancing performance and student success, restricting the secretary’s ability to pick winners and losers based on politics.”

This sounds as though it could really help bolster vocational programs and be another piece towards solving the technician shortage, so long as it clears the Senate and Republican President Donald Trump.

A prior version stalled in the Senate last year, but the head of the Senate Health, Education, Labor and Pensions Committee on Friday called a Perkins Act reauthorization “a top priority.”

“Reauthorizing the Perkins Career and Technical Education Act is a top priority for Chairman Alexander this Congress, and he has asked Senator Enzi to continue to make progress on the great work he did last Congress to develop a proposal for the Senate to consider,” the office of Sen. Lamar Alexander, R-Tenn., said in a statement.

Be heard: Senate contact information can be found here. The White House can be reached here.