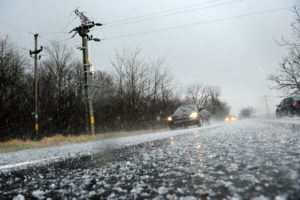 Results from a computer model led researchers to conclude in a new Nature Climate Change paper that global warming will cause fewer days of hail but larger hail within the remaining storms between 2041 and 2070.

Authors Julian Brimelow, William Burrows and John Hanesiak don’t say what’s going to happen between 2017 and 2041, though they note that their broader findings on the relationship between human-generated warming and hail echo other studies, including one looking at 25 years of hail in France. So some of this kind of thing might be happening today.

Overall, the trio expects certain parts of the country will receive a greater than 40 percent increase in accumulated kinetic energy — basically, how powerful a hailstorm will be based on “the combined influence of hail occurrence and hail size.”

According to the scientists, the peak hail damage window will shift to earlier in the year. Drier and cooler regions will be hit with higher force, while moister and warmer areas should see less damage because global warming will cause hail to more frequently melt before it lands. (The scientists call this HALO, for “hail aloft” but melting before landing.) However, it appears that the surviving hail will have more time to grow larger because of an increased buoyancy caused by the changed climate.

“Over most areas, a complex interaction of factors translates into fewer hail days overall, but a shift to larger hail diameters, an increase in the occurrence of very large hail ([Diameter] > 4 cm), and an increase in the fraction of severe hail (D > 2 cm),” Brimelow, Burrows and Hanesiak wrote in Nature Climate Change. “Consequently, a major increase (>40%) in AKE (that is, damage potential), especially in the spring, is anticipated over most ecoregions, including key hail areas such as the High Plains and Great Plains in the US. This is not true for warm and humid ecoregions, where the increase in melting reduces (and in some cases offsets) potential gains in hail size from increased buoyancy. More HALO days are also favoured because of an anticipated increase in thunderstorms on exceptionally warm days with moderate MLCAPE and/or BWS. Consequently, a marked decrease in hail damage potential is expected over eastern and southeastern ecoregions in spring (Florida and vicinity of the Appalachians) and summer (Mississippi valley). The increase in AKE retreats to higher latitudes and mountainous terrain in the summer, including ‘hail alley’ in western Canada and parts of the US prairies.” (Emphasis ours.)

Brimelow told CNN the researchers expected less hail but thought it’d be less powerful than what their model indicated.

So if you’re a young hail-chasing dent tech or insurance adjuster, expect to be spending less time in certain parts of the country in 20 years. And if you’re already encountering larger dents today, that might be why.

Check out the Nature Climate Change research and maps predicting trends in hail melting before contact, hail diameter, and hail kinetic energy and see what you might find in your state over the next few decades.