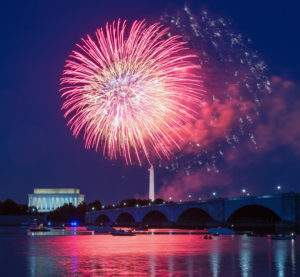 In honor of the Fourth of July, we thought we’d give you a little roundup of what’s been going on in the state and federal governments the Founding Fathers created more than 200 years ago.

In some cases, the democratic process has produced some big wins for auto body shops; in others, it’s better luck next session. Some items are still going through the system, and collision repairer professionals might want to exercise their First Amendment rights of free speech, free assembly, and petitioning the government to encourage officials to adopt a shop-friendly policy.

Here’s some of our recent coverage. Just because a particular item isn’t tied to your own state government doesn’t mean it’s not worth checking out. Often times, one Legislature or interest group’s action will serve as a model for a similar effort in another state. Fourth of July fireworks over Washington, D.C., are shown. (AdamParent/iStock)

After nearly a year of work, a low-profile but high-powered task force made up of insurers, collision repairers, OEMs, aftermarket parts manufacturers and Mississippi’s attorney general and insurance commissioner has finished and released a “Consumer’s Guide to Insurance and Auto Body Repair.” (Provided bu Mississippi Attorney General’s Office)