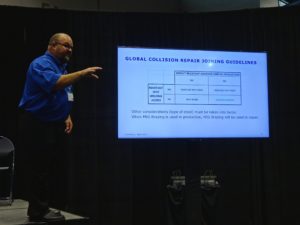 Expect to be doing a lot more squeeze-type resistance spot welding and a lot less plug welding under a dramatic change to General Motors’ joining rules for new vehicles starting with the 2018 model year.

There’s other benefits as well that might have informed GM’s thinking. “With an increased number of vehicles being manufactured with high-strength and ultra high-strength steel, spot welding is an effective solution for minimizing the heat-affect zone,” I-CAR describes squeeze-type resistance spot welding. “The process of spot welding for attaching body panels and components has many other benefits as well, among them are decreased damage to corrosion protection and replication of production weld appearance.”

GM collision repair experts gave the industry an overview of the changes to the OEM’s joining instructions during a NACE training event last month. The OEM plans to issue a position statement discussing the revisions and will incorporate them into its OEM repair procedures starting with the 2018 model year, according to Macco.

Collision repairers should expect future welding instructions to frequently follow the flowchart shown in the slide below, according to GM body structure service engineering advanced serviceability of design team leader Bob Hartman. The matrix is an internal GM resource the authors of repairer procedures use as a reminder when writing the actual instructions repairers will see in the manuals, according to Hartman.

This by no means should be interpreted as the only four types of joining scenarios called for on future GM vehicles or a substitute for the actual OEM repair procedures. For example, shops barely weld anything on the Cadillac CT6, and they’ll be using fasteners like self-piercing rivets and flow-drill screws on that and likely other future GM vehicles. It is paramount that shops refer to the actual OEM repair procedures for a particular vehicle to verify what method or methods GM wants — and where the welds, rivets, or adhesives are even supposed to go.

That said, the diagram gives a good sense of GM’s thinking so shops can prepare and train accordingly. If impact-resistant adhesive was used in production and a resistance spot welder will fit in the joint, expect to apply adhesive and then squeeze-type-resistance-spot-weld the joint. If the tech can’t access the area with the welder, they’ll likely be using a rivet in conjunction with structural adhesive.

GM also noted that the grade of steel will be a consideration and MIG-brazed joints will be MIG-brazed by the shop.

If you’re unfamiliar with or rusty on some of the joining methods described here, don’t miss your chance to get caught up — and prepared for the future — during the SEMA Show in Las Vegas. Learn from Ken Boylan, Chief, during “Current and Future Technologies 2017 and Beyond”; Toby Chess, Kent Automotive, with “Adhesive Joining in Modern Repairs”; and Dave Gruskos, Reliable Automotive Equipment, at “Get Attached to Following Procedures: A Comprehensive Guide to OEM Joining.” The sessions are part of the SCRS Repairer Driven Education Series Oct. 30-Nov. 4. Register here for the individual classes or the series pass package deal, which includes the entire week of classes, all three parts of the OEM Collision Repair Technology Summit and the Nov. 2 Sky Villa afterparty.

As noted before, exceptions will arise, making the actual OEM repair procedures, not these “Cliff’s Notes,” the true guide. Hartman said GM already had an instance where adhesive was used at the factory but it was impossible for an aftermarket repairer to access the joint with a rivet gun or resistance welder. The repair procedure team put the problem to GM’s engineers, and the engineers examined the joint and concluded, “‘Leave the adhesive off. MIG plug-weld,'” according to Hartman. The OEM repair manual will therefore contain the steps to perform this anomalous repair, he said.

Hartman explained that resistance spot welding over structural adhesive, which might seem counterintuitive to a layman, “actually makes the weld better.” Some of the adhesive will burn off — just as it does in the factory —  but the overall joint will be improved and have better corrosion protection, according to Hartman and Macco.

Repair manuals for vehicles made before the 2018 model year aren’t rendered invalid by GM’s new direction, according to Macco and Hartman.

Though a shop will likely be applying more adhesive to GM vehicles — Hartman showed how the adhesive is “all over the place” in the 2018 Chevrolet Equinox — it’s vital that technicians only do so in the precise areas specified by General Motors. As the guidelines above indicate, you typically wouldn’t apply adhesive during aftermarket joining if GM didn’t in the factory.

“That is a huge statement,” Macco said. He gave the example of a body side 20 percent covered by structural adhesive. If the shop decides to cover the entire area with the glue instead of just the 20 percent specified by GM, “they very well could affect the crash characteristics of that vehicle.”

A stronger joint could be just as dangerous as a weaker one, according to Macco, for GM designs vehicles “to absorb and distribute energy” in a particular way.

The company tests welders “across the board,” and equipment manufactures can submit candidates to GM for approval, Macco said. Hartman said the GM was “really focusing on auto-mode” welders which can adapt themselves to the particular joint conditions to keep the tech from having to make those decisions. He noted that this wouldn’t eliminate the need for a tech to follow I-CAR recommendations on testing welds.

Hartman said the same rule applies for structural adhesive; GM has approved certain products, and a shop must use one of those options to perform the repair, he said. GM-approved welders and adhesives will be indicated within OEM repair procedures as well, he said.