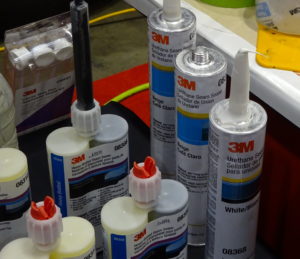 “Most people don’t consider that collision repairs are commonly the cause of premature vehicle corrosion,” Collins and 3M’s Dennis Keicher wrote in the July 2016 Auto Body Repair News.

“Consider that the minute your repairs are completed, the repaired areas are under attack by the corrosion process.”

“The welds are just not protected,” Collins said of one example. Corrosion will quickly work into the untreated area, he said. Another example involved “low-quality” welding and no corrosion protection on a frame rail — a structural part — which was “starting to corrode already.”

By using a “simple mirror,” an inspector can easily catch errors on the bottom of the car, Collins said. He said one would be surprised how many times no corrosion protection is applied to the back side of the rocker pinchweld. 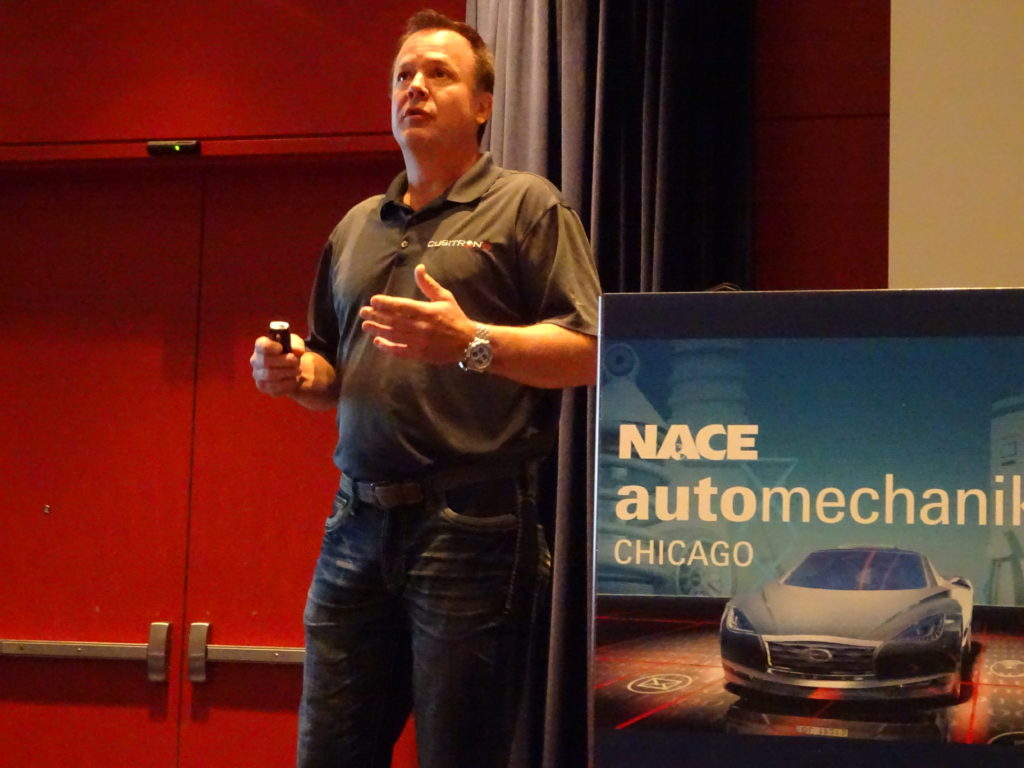 Collins also recalled being in a meeting with a large MSO, and the director of operations looked up how much cavity wax one of the company’s shops bought in half a year.

“One can,” Collins said, noting that it must have been an eye opener for the executive.

The irony here is that it’s not that hard to protect a car from corrosion, based on Collins’ lecture.

Corrosion is science, Collins said — “but it’s not rocket science.” Cover an exposed surface with corrosion protection, and it stops or significantly slows the process, he said.

Besides, “it does not take that long to do,” he said.

He shared his concept of an “ideal joint” involving adhesives, sealer or a weld-trhough primer, followed by seam sealer, and then cavity wax. (Never use adhesive in place of a seam sealer unless the OEM says to, Collins said — it could increase the strength of the joint and alter the structure’s crash energy management.) 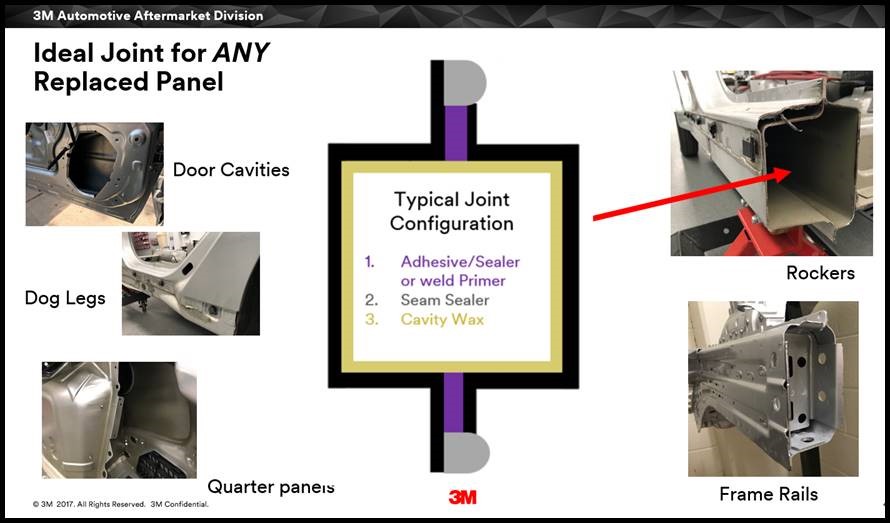 Collins called the trio “belt, suspenders, and another pair of suspenders” in terms of protecting the vehicle, and applying all three will ensure the car lasts a long time.

Many technicians think, “‘It’s not visible. I don’t need to dress it,'” according to Collins. But the issue isn’t aesthetics — it’s keeping corrosion from eating away your work.

He demonstrated what 3M’s salt spray chamber did to an unprotected and protected panel.

In 1,500 hours, the unprotected weld is choked with rust. The weld with three coats of cavity wax looks fine.

As the average American drives 293 hours a year, this might make some shops wonder what kind of corrosion is happening on the cars they fixed five years ago.

Parts of the ‘ideal joint’

Collins noted that the weld-through primers within that ideal joint can be misunderstood.

“You have to use the correct weld primer,” he said, noting that he called it “weld primer” because a shop shouldn’t be welding through or on top of any coating. A technician ought to be welding to bare metal, but many don’t understand that, according to Collins, who also serves as an I-CAR welding instructor.

As for seam sealers, Collins noted that manufacturers are even outright recommending seam sealers even if they weren’t used in the factory, according to Collins. After all, a collision repairer can’t dip the part or entire vehicle in a zinc phosphate bath the way an OEM can.

Collins noted that bare metal seam sealers were viable, but they had to be used correctly. “You have to get good coverage,” he said.

The cavity wax alone can do a lot of heavy lifting.

“This material is made to be applied to these areas on both steel and aluminum vehicles alike, and yes, it really is that important,” I-CAR agreed in 2016.

It used to be more difficult to use, but the introduction of application wands has made it easy to introduce to the vehicle, according to Collins.

Appling the wax is “all about film thickness,” he said. 3M recommends two passes, maybe even three — particularly in a blind cavity — otherwise, the shop risks inadequate thickness. It’s OK to apply wet-on-wet, and “it’s a good thing” if it’s running out of drains and flanges, as that’s a sign that everything is sufficiently covered, according to Collins.

Collins noted that in the past, I-CAR used to recommend spraying in epoxy primer ahead of cavity wax, but it takes “forever” to cure and if uncured can mix with cavity wax for an undesirable result. He said I-CAR changed that guidance about four years ago, but many in the industry aren’t aware of the switch.

“It causes more problems than it helps,” Collins said of spraying epoxy primer ahead of cavity wax. The primer also will flake off in the presence of soot or paint, while cavity wax is sticky and will hang onto such substances.

Some failures of corrosion protection “comes from using inferior products,” said Collins, who in particular warned the audience about 1K primers.

A shop might use 1K spray can primers and paints, and unless there’s high-quality primer underneath, “you’re not going to have good corrosion protection,” he said. 1K primers aren’t always durable, and like etch primer, their presence can lead to seam sealer failing, according to Collins.

“The 1K primers are scary,” Collins said. He recalled a case where a shop sent back a sample to 3M and complained the seam sealer failed.

Collins was able to peel off the seam sealer “easily” — and found 1K primer.

“Your repairs could be under attack”

“Are Your Repairs Under Attack?”

Seam sealers and cavity wax application wands can be seen at the 3M NACE booth July 28, 2017. (Provided by Shawn Collins/3M)

3M advanced technical specialist Shawn Collins offered this slide as an example of an “ideal joint” in terms of corrosion protection. (Provided by Shawn Collins/3M)