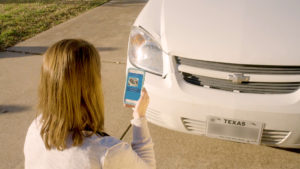 “We believe that up to 50 percent of the collision losses today could be handled in a self-service or touchless manner,” Brower told A.M. BestTV in a video posted Aug. 15, clarifying that forecast as “at least within the next five” years.

“Over the next 10 years, I really see us moving to an environment where the vehicle can report the loss for the customer,” Brower said. It might not even be the vehicle; telematics within a smartphone or USB dongle might be able to notice a crash and inform the carrier with an electronic first notice of loss.

“Self-service” claims are like what Allstate’s doing now with QuickFotoClaim. A LexisNexis March 2017 whitepaper by Brower and Todd Fannin defines “self-service” or “Virtual Handling” claims as “a process or workflow in which either a customer or vendor captures damage photos or streaming video that allows a claims adjuster to conduct the damage assessment remotely. No insurance carrier employee conducts a physical, in-person inspection of the vehicle or property.”

“Touchless” claims are what insurers like Metromile and Lemonade (home insurance) are doing now, where a piece of telematics technology or the customer reports the damage, and artificial intelligence evaluates and pays the claim.

Brower and Fannin’s paper define “Touchless Handling” as “a process or workflow that is similar to Virtual Handling except no claims adjuster or insurance carrier employee is involved in the claims process at all. Technology is used to report the claim, capture damage or invoices, run a system audit and communicate with the customer electronically. If the claim meets approved criteria, the claim is automatically paid without human intervention.”

“I think that definitely is the future,” he said.

Disregarding the issue of insurer and OEM “steering” raised by the EFNOL “touchless” process, three things come to mind about this future.

It’s even more crucial for shops to educate their customers of the risk the A.I.’s or photo appraiser’s initial check is underestimating the damage and to bring in vehicles for a proper physical inspection just to be sure. It’s going to be tempting to just assume “the computer knows best” and take the money and run assuming it’s “not that bad” — when in fact the car now needs ADAS calibration and has hidden damage from the crash energy transfer.

Will the objectivity of the A.I. actually produce better results for shops than your local “no experience needed” adjuster? Or will the model be skewed by insurer incentives to deflate costs and a data set of estimates from adjusters and shops either uninformed or intentionally eliminating line items. Even telematics-based claims relying on objective data from the car itself (change in velocity and g-forces, for example) are only going to be as good as the model calculating what might be damaged.

Will insurers save so much money by cutting staff and time until first notice of loss that they’ll drop resistance to supplements unless the A.I. flags one as fraudulent? Is it really worth storage, rental car, adjuster and supervisor salaries and benefits, and customer dissatisfaction to spend time and manpower arguing with a shop over legitimate supplements? (Which average $870.27, according to Mitchell’s second-quarter data.)

What happens to direct repair shops under a model where the insurer doesn’t need them to write initial estimates, which Brower described as one example of the “Fast Track” methodology now transitioning to virtual/self-service claims.

We don’t have the answers, but these are the kinds of questions shops need to consider as new claims methodology and technology takes over the P&C industry.

“Hands Off: Insurers Move Toward Era of Touchless Claims”