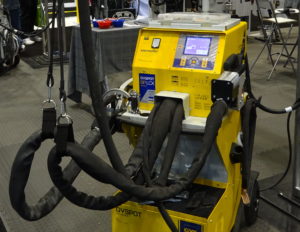 Though squeeze-type resistance spot welders can be easy to use and even come with automatic settings, repairers will still need to be mindful of a few best practices while wielding one.

One is simply the strengths and limitations of the automatic setting itself, according to a recently released Society of Collision Repair Specialists video on spot welding. The free YouTube film is the first of a trilogy on the topic.

However, Yeung noted that the manual setting can sometimes allow a technician to compensate for some shop power supply issues. SCRS board member Dave Gruskos (Reliable Automotive Equipment) also observed that automatic settings might only deliver the weld necessary for an average joint, and the ability for a technician to manually dial in weld-specific settings still “seems to be very, very important.”

SCRS Education Committee Co-Chairman Toby Chess called automatic spot welders “great” but pointed out that some technicians treat the devices’ output as “Gospel” and don’t perform test welds to ensure the weld AI is really getting the job done right.

Technicians might also carry a misconception of a proper weld’s appearance, according to former SCRS Chairman Barry Dorn (Dorn’s Body and Paint). When one sees videos from a manufacturer’s factory, “you see sparks flying,” he said. This leads some technicians to think the sparks are “indicative to a good weld.”

In reality, if sparks are flying from a squeeze-type resistance spot weld, “that means it’s not good,” according to Dorn. The welder wants to achieve “as little spark as possible,” he said.

“You’d be surprised the amount of people that don’t know that,” he said.

The tech also needs to take steps to protect themselves and the vehicle, according to Gruskos and Chess.

Gruskos said that older welders had multiple heavy cables, but the trend was moving toward a gun with an internal transformer and a single cable to minimize the magnetic field thrown off by the wiring.

“The standard seems to be the transformer gun,” Gruskos said. The device can convert direct current voltage and converting it to alternating current and get the weld up to say, 13,000 amps, he said.

Otherwise, “there is a safety factor involved” with the older format, Gruskos said.

Large cables draped over a shoulder or running between the legs were dangerous because of the magnetic field. “They should be kept away from the body,” he said.

Chess also recommended keeping any spot welder cable perpendicular to a vehicle to avoid the electromagnetic field affecting the wiring in vehicles. He also said any vehicle computer too close to the welder could be affected as well by the amperage, and an estimator might need to include time to remove the computer and potentially even reprogram it.

The tech performing the spot welding might not need to be as concerned with eye protection as with other forms of welding, but he or she should still don goggles at least as well as gloves and a respirator, according to Chess.