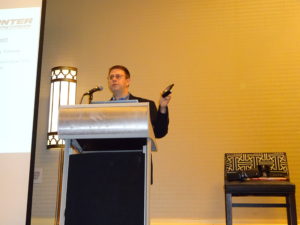 Wheel alignment giant Hunter Engineering has worked hard over the past year to raise aftermarket awareness of new OEM calibration demands following what had previously been a simple wheel alignment.

Without such calibration, key safety systems — including at least one required by the feds — could be operating on incorrect information, leading to potentially disastrous results.

For example, seven of the top 10 vehicles on U.S. roads in 2015 needed a reset of a standard or optional electronic stability control system — technology required on every model since the 2012 model year because of the safety benefits —  following a wheel alignment, Hunter Engineering research has found.

Such recalibrations can also be necessary following an alignment, on systems like lane depature warning and automatic lane keeping, adaptive cruise control, electric power steering and forward collision warning and autobraking, according to Hunter. During an April Repairer Roundtable, Hunter Engineering senior product manager Kaleb Silver pointed out that shops will also have to recalibrate these systems after any part replacement.

A good sense of what might be required can be found in a series of videos Hunter posted this summer related to its aftermarket calibration offerings. As always, the usual caveat: OEM tools are the only ones guaranteed to work as the manufacturer intended.

If the Hunter videos just blew your mind, it’s time to get up to speed fast — and if you sublet wheel alignment, make sure your third-party aligner knows these issues as well. And those are just some of the changes hitting automotive repair like a ton of bricks as consumer and regulatory demand lead automakers to pack fairly ordinary vehicles with futuristic, computer-controlled advanced driver assistance systems aimed at saving humans from themselves. (With 94 percent of collisions attributed to human error and distracted driving potentially growing, we Homo sapiens need all the safety hedges we can get.)

A good starting point for learning about what ADAS will mean for your shop and customers will be “The Impact of Advanced Vehicle Systems on Routine Repair Process and Procedure,” which runs 11 a.m.-12:30 p.m. Nov. 2 during the Society of Collision Repair Specialists’ OEM Collision Repair Technology Summit at SEMA.

Silver will moderate a panel including Auto Care Association regulatory and government affairs Senior Vice President Aaron Lowe, who might have some interesting details to share about how regulators see the aftermarket with regard to ADAS or even autonomous vehicles; Honda collision assistant manager Scott Kaboos, whose OEM is sending thousands of new cars with ADAS on the road and into your shops and pledges freeway autonomy by 2020; and Dean McConnell, director of the Continental ADAS business unit, global customer programs, and NAFTA OEMs chassis & safety division, whose Tier 1 company invents much of the technology being incorporated by OEMs. “New technology is rapidly advancing on vehicles today, and Advanced Driver Assistance Systems (ADAS) are becoming increasingly more popular on new vehicles and can have significant effect on how you perform previously routine services in your collision repair facility,” SCRS wrote last month. “While those on the road benefit from ADAS, the repair industry must change how they approach traditional services as many OEMs require additional procedures, calibrations and tools to ensure restoration of vehicle functionality. Kaleb Silver, Senior Product Manager for Hunter Engineering will present on challenges facing the industry, and the impact of advanced systems on routine services such as wheel alignments. After the presentation he will welcome the following panel to discuss the growing complexities facing the repair marketplaces.”

Silver discussed some of the main issues with us in a four part series earlier this year, which might be another good resource for shops, dealerships, and third-party wheel alignment technicians: Finally, a presentation and Q&A by Silva during SCRS’ April Repairer Roundtable also answered some of the nuts-and-bolts questions of what the alignment-related technology alone means for shops. Here’s some of the highlights:

Paying for all this stuff: Silver earlier discussed with us the lack of uniformity between OEMs on recalibration procedures and equipment and the difficulty some shops might have in securing the space to perform the work.

During his April presentation, he was asked what a reasonable amortization rate would be on a repairer’s bills? After all, the equipment for an 2017 Audi Q7 cost $18,000 were a shop to buy it all from scratch.

Silver said that most shops tend to amortize their equipment over about seven years. However, the major tools in that Q7 recalibration suite haven’t changed since 2004, and the entire suite together would work for every make in the Volkswagen suite of vehicles (VW, Audi, Porsche, etc.), according to Silver.

Vehicle modifications: Asked about the absence of tire size and pressure checks in his videos, Silver said he did them with the assumption that these variables had already been verified during the alignment.

While the tire pressure is easy to address, the tire size and other modifications could be a greater headache for a shop. Asked about doing collision repair work in a rural area full of trucks which have winches or larger tires or had been lifted — all of which potentially could alter how a safety system “sees” the world — Silver said Hunter recommends working on vehicles which are at factory specs.

“We don’t create our own specs,” Silver said. He said Hunter does have a process for calculating specs for a modified vehicle, but it’s time-consuming and not popular.

Which systems exist: You’re probably going to need build data or information pulled from a scan to determine all the systems which need to be checked and recalibrated following a collision, according to Silver.

However, a starting point at least would be Hunter’s Form 1708-T, which Silver said any Hunter rep could give a shop. The document is a cheat sheet for both wheel alignments and which safety systems need to be reset following an alignment.

“You want to call your Hunter rep and get that now,” Vehicle Collision Experts CEO Mark Olson, a former Hunter trainer, said during the event. Was it even done right?: Asked about proof that an alignment sublet out to a third party included the necessary recalibrations, Silver said Hunter’s alignment technology has a means of printing out whether that work was done. However, he said he couldn’t speak for other manufacturers and suggested the collision repairer ask their alignment firm for documentation and their qualifications for performing the work.

What if you’re buying a certified used car? Could a dealership know if the recalibrations were done correctly under the prior owner?

Silver said he wasn’t aware of any way of vetting that they had been done right short of recalibrating the car oneself.

“That’s a missing part of things, in my opinion,” he said.

How long?: Asked about how long such recalibrations took, Silver said a wheel alignment is about 30 minutes, and many resets related to it take at least that long.

He also displayed a slide showing how multiple recalibrations on the Q7 each technically were linked to an hour of book time. Hunter Engineering senior product manager Kaleb Silver holds up a steering angle sensor during an SCRS Repairer Roundtable April 19, 2017. At his left on the chair are a rearview mirror related to an advanced driver assistance system camera mounted behind the windshield and a radar device typically housed in the front of the vehicle. (John Huetter/Repairer Driven News)

Hunter’s Form 1708-T, the November 2016 version of which is seen here, is Hunter’s cheat sheet for both wheel alignments and which safety systems need to be reset following an alignment. (John Huetter/Repairer Driven News)

Hunter Engineering senior product manager Kaleb Silver on April 19, 2017, presents during an SCRS Repairer Roundtable how many hours could be needed to recalibrate various systems on an 2017 Audi Q7. (John Huetter/Repairer Driven News)