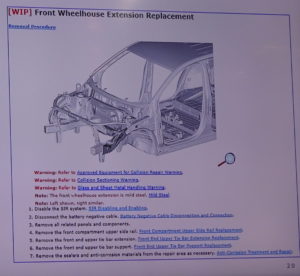 A $31.5 million verdict against a Texas shop who failed to follow Honda repair procedures might hopefully have inspired collision repairers to research and adhere to the OEM instructions.

Or not. “It hasn’t sunk in,” P&L Consultants co-owner Larry Montanez argued in a Monday interview. Many shops are “still going to slap cars together,” he said.

But while he expressed pessimism about a chunk of the industry, Montanez will offer a primer on accessing OEM instructions to the shops who do see the light with “How to Find, Read and Understand OEM Repair Procedures,” 3-5 p.m. Wednesday, Nov. 1, during the  SCRS Repairer Driven Education series at SEMA. (Sign up for the class here, or buy the series pass package deal here.)

“All it takes is one Todd Tracy” to catch a shop not researching procedures, Montanez said, referring to the plaintiffs’ attorney in the Texas John Eagle Collision Center case. Other attorneys would likely follow Tracy’s lead following the verdict, he said.

OEM repair procedure websites can seem daunting, but they’re learnable, Montanez said. Just practice, he said, likening it to buying a cellphone with a new OS. “You screw around with it” and learn the system, he said.

“That’s for your own benefit,” he said.

But flat-rate techs refuse to put in the effort because they won’t get paid for it, according to Montanez. “It’s laziness and greed,” he said. In general, if a tech keeps practicing with the OEM repair procedure sites, “it becomes easier,” Montanez said.

OEM certification training can help here. Mercedes has one of the most difficult sites to use, if not the most difficult, he said. But every Mercedes class has students look up and explain repair procedures so they can practice the system.

After a while, the technician gets used to the system and what parts are likely to be involved in the repair, he said.

Montanez said some OEMs with robust certification programs also support repairers with procedure hotlines. If the shop can’t find a procedure or has a technical question, they can contact the OEM and get an answer.

He recalled one instance where the OEM procedures seemed to suggest a vehicle be totaled for damage to the underside. Contacted for clarification, the automaker sent a shop a letter from their German headquarters filling in the gap and explaining precisely how to repair the damage safely.

It’s not just technicians that balk at researching repair procedures because of compensation. Advised to put the cost of researching OEM procedures — both the subscription price and the labor hours spent researching the instructions — on the estimate, owners insist that it’s impossible.

“You just want to fight with me and argue with me,” Montanez said. “… My shops get paid for it.”

The technician needs to research the procedures for each part involved in the repair, and this might involve some skipping around the manual instead of having all those instructions in one place.

Montanez offered the example of a repairer who looks up procedures related to replacing the mirror and complains that it doesn’t say what work is needed on the camera mounted within the part.

The technician needs to look up those steps under the part of the manual dedicated to replacing the camera, Montanez said.

But I’m not replacing the camera, the tech might complain.

Collision repairers need to understand that unlike collision repairers, mechanics generally only replace parts — they only R&I a part if it’s blocking the component they’re trying to access, according to Montanez. The procedures for reinitializing the camera are located within the segment related to replacing the camera.

“That’s what these guys don’t realize,” he said.

The technician needs to put two and two together. Montanez also described a sort of peel-an-onion approach to repair procedures.

Remove a bumper fascia and see electronic components underneath it? Look up those parts in the manual and see what procedures and considerations might be needed. Don’t know what one of these uncovered parts is called? “Google the (part) number,” learn its proper name, and search for that item within the repair procedures, Montanez suggested. Remove a decklid with a rearview camera? Check to see if the wheels need to be realigned.

Sometimes, the instructions will admittedly be in a completely obscure location, such as BMW restrictions on reconditioned wheels which are located in the OEM’s refinishing repair procedures, according to Montanez.

“You can see why some guys just don’t see this,” he said. Despite the learning curve, Montanez stressed the need to use the actual OEM websites instead of a third-party aggregator.

“Why does everyone … circumvent the original and go after the knockoff?” he asked. Third-party sites might be missing information found in the original, and the aggregators integrated within an estimating service force a tech to log on and access the actual estimate, he argued. The latter is an inconvenience and poses the risk that the tech inadvertently alters or deletes the estimate, he said.

Instead, Montanez advocates techs each have their own laptop to access the OEM sites directly, though he also suggested a model where shops have a dedicated automaker repair-procedure expert able to pull info for their colleagues. (Though he noted the OEM procedure expert could be gone for a combined two months out of the year attending off-site automaker classes required for the shop’s certification.) To that point, Montanez noted that the repair procedure sites for the German OEMs sometimes can have some “hinky stuff.”

Most OEMs’ technical support sites will work fine in multiple common Web browsers — Chrome, Firefox, Internet Explorer. But some of the European manufacturers’ sites can only be accessed on Internet Explorer — and “it can’t be the new Internet Explorer,” he said. The shop or technician might have to install an older version of IE and ensure automatic updates are deactivated, according to Montanez.

There’s even repair procedure information for painters, Montanez said. If a sensor beneath a panel would be thrown off by excessive paint over the unit, the OEM repair procedures will include the number of mils permitted on the panel or bumper fascia. (Around 4.9-5.3 mils for the German manufacturers, and between 6.5-7.2 for the Americans, Montanez recalled.)

The shop might need to sand down enough so that the paint doesn’t exceed the thickness, according to Montanez.

But even if there’s no sensors underneath the substrate, the painter might still need to check the OEM repair procedure for the mil thickness or risk jeopardizing the resale value of the vehicle, according to Montanez.

He cited Porsche’s certified pre-owned program, which guarantees a Porsche owner top dollar for the vehicle even after a collision repair, so long as it was performed by a Porsche-certified shop and within tolerances.

These tolerances come down to millionths of an inch on coatings, Montanez said. “You’re talking super thin here,” he said. It takes about 39 mills to make a millimeter, he said.

Links to OEM repair procedure websites are shown on the portal OEM1Stop. (Screenshot of www.oem1stop.com)