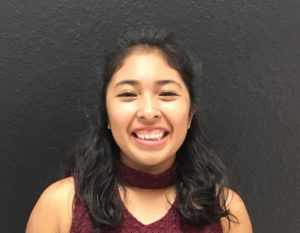 “Although she is a high school senior, and therefore younger than most of the student in my auto collision repair program here at Lorenzo Walker Technical College in Naples, Florida, Rosalinda has demonstrated more ambition and determination that any student in recent memory,” Retz wrote to CREF in his nomination. “She is an inspiration to young people everywhere considering entering the auto body business.”

CREF will sponsor a trip to SEMA for Pop-Pablo and Retz and honor them at a Tuesday, Oct. 31, reception at 9 p.m. at the Renaissance Hotel. Anyone in the industry is welcome to attend; RSVP at info@ed-foundation.org.

Besides the endorsements from Retz and now CREF, a video posted Sept. 26 by Immokalee Technical College suggests Pop-Pablo would be a welcome addition to any shop with an opening in the paint department.

In the film, Pop-Pablo says she speaks English, Spanish, and a Mayan dialect, and while she has learned estimating and auto body work during the program, her favorite part is refinishing, calling it “just so adrenaline-running.”

“My parents discouraged me from doing it, but now they’re really proud of me,” she says of her enrollment into the technical program.

Another point in her favor: LWTC students should be able to adapt to a for-profit shop “at the drop of a hat,” Retz says in a 2016 video posted by user Marie Coleman.

The program has school-owned cars, but it also takes customer work, according to Retz. “I actually run the class like it would be a regular shop out in the real world,” he says.

CREF also announced two Student of the Year runners-up — whom smart shops in Tennessee and Ohio might also want to try and hire:

Makayla Baldwin of Bradley Central High School in Cleveland, Tenn., is a SkillsUSA member and chief financial officer of the collision repair program “managing costs, purchasing consumables and inventory control” at the high school, she says in an Student of the Year application video posted by the high school. (She’s also in the National Honor Society and leads an ROTC squad.)

Baldwin also says she’s dual-enrolled in the collision repair program at Tennessee College of Applied Technology in Athens, Tenn., and is pursuing an unspecified I-CAR certification. She said she sees “exceptional” opportunities in the industry and describes herself as “very passionate about cars.”

“The hard work my instructors and I put in paid off,” Wertz told the Advertiser-Tribune. He told the newspaper he spent hours practicing for the competition.

Wertz can be seen at left in these Vanguard-Sentinel Career and Technology Centers photos from 2016, which apparently was a good year as well for the lad:

If you’re trying to hire blue chips like these three (and probably the other 17 CREF nominees), consider posting a free ad on the Society of Collision Repair Specialists’ Career Center. The trade group has waived fees through Nov. 30.