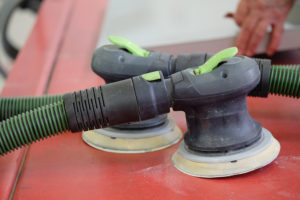 Though not all might be feasible in an aftermarket shop environment, an expert’s recent discussion of various surface treatment options prior to factory adhesive bonding still has relevance for collision repairers and painters.

BTG Labs chief scientist Giles Dillingham observed that while the properties of a substrate and adhesive can be controlled by their respective suppliers, the “critical component” of the interface between the two substances is left in the hands of semi-skilled workers with manual tools on the factory floor.

It’s important that this human element be trained and equipped to correctly prep the surfaces to be joined, or else the entire bond could fail despite both substrate and adhesive meeting specifications, he suggested. (Dillingham did however note that manufacturers might want to start setting tolerances for an acceptable amount of contamination or oxidation on substrates delivered by suppliers.)

The goals of any factory operation should be to produce high enough surface energy (reactivity) for the adhesive bond to take and be consistent between points, parts, shifts, days and operators, according to Dillingham.

As a collision repair facility is essentially a miniature car factory, the same goals would seem to apply — particularly since the same scientific principles seen in adhesive bonding affect how well paint sticks to the substrate.

“Consistency is the single greatest challenge to successful surface preparation,” a BTG slide stated (emphasis theirs) during the Oct. 17 Composites World webinar.

Predictability matters more to the structural engineers designing the joint than the ultimate theoretical strength of the adhesive or substrate, Dillingham said. An engineer can adapt a design to ensure weaker aspects of the joint and the overall bond deliver a performance within specifications — so long as their plans are followed in the actual production facility.

This is why you follow OEM procedures and tool specs and why OEMs won’t vouch for parts or tools they haven’t tested. The OEM can be confident crashworthiness will be restored if the conditions it tested are met. Deviate from those parameters, and the OEM can’t guarantee what will happen.

Dillingham’s talk focused on bonding composites rather than metals, but there’s still food for thought here. (Of course, give it a few more years, and collision repairers will probably be bonding composites fairly regularly anyway.)

He said there were two main types of composite surface treatment, mechanical and chemical. Both can be effective, but “the devil’s in the details,” according to Dillingham.

Learn about joining during SEMA with Toby Chess of Kent Automotive at “Adhesive Joining in Modern Repairs” and Dave Gruskos of Reliable Automotive Equipment with “Get Attached to Following Procedures: A Comprehensive Guide to OEM Joining.” The sessions are part of the Society of Collision Repair Specialists Repairer Driven Education Series Oct. 30-Nov. 3. Register here for individual classes or the series pass package deal, which includes the entire week of classes, all three parts of the OEM Summit and the Nov. 2 Sky Villa afterparty.

One mechanical method is “peel-ply,” which is a protective outer layer removed from the substrate just before the adhesive is applied — kind of like peeling the backing off an individual slice of cheese.

The newly exposed layer of substrate is highly reactive, making for strong bonds with the outer molecules of an adhesive applied to it. (Based on Dillingham’s presentation, a properly prepared substrate at the molecular level contributes a great deal to the strength of the bond.)

Leave the substrate exposed for too long before applying the adhesive, and oxidation and other contamination result in a “chancy, or not so reliable” bond, Dillingham said. Those determining specifications will need to consider, “‘How much decay can I tolerate before I begin to jeopardize the properties of the adhesive bond?'” he said.

Often, a recipient will hand-sand the substrate after removing the peel-ply, “which may or may not be good,” according to Dillingham.

Shops will be most familiar with the mechanical technique of abrasion, a term which encompasses hand or orbital sanding.

Dillingham showed a microscopic-level image of the results of scuff sanding and running a solvent wipe over a composite. On the surface, one thinks mission accomplished, “‘that’s not glossy,'” he said. But in reality, the hand-sanding operator missed 20-30 percent of the surface — “and this is typical of a scuff sanded surface,” Dillingham said. “The problem with hand sanding is: ‘How do you know?'” Dillingham said. He said the challenge rests in delivering a repeatable, consistent performance which is also uniform across the part’s surface; for example, a curved part might have undersanded areas.

This is not to say it can’t be done — “hand sanding can make really good bonds,” Dillingham said, and gave an example of tripling lap shear strength through hand sanding — but “will your technician do this day after day?”

Calling it an “interesting topic” and noting that “it’s a little controversial,” Dillingham also advised against wiping a sanded surface with a solvent to remove debris prior to adhesive bonding, noting that BTG suggests clean compressed air instead.

He argued that since sanding a substrate increases its reactivity by breaking the bonds between the surface and the dust generated, the residue was also reactive — i.e., the adhesive would stick to it well — and would be absorbed by the adhesive anyway, “a good thing.”

However, wiping a freshly abraded surface with solvent could recontaminate it or through the act of wiping cause the surface energy of the substrate to decrease — reducing the quality of the adhesive bond you apply there, according to Dillingham.

As Dillingham noted, it’s a controversial topic; as always, do whatever the OEM tells you to do for a specific procedure like this. But he raises an interesting point.

Media blasting is probably less of a shop-level process, but the science is still worth noting by a repairer. A robot fires a barrage of grit at the substrate to similarly clear away contaminants and oxidation and make the surface more receptive to the adhesive.

“It can sure do a nice job,” but it’s messy, Dillingham said.

The real concern lies at the microscopic level with the damage to the underlying carbon fibers when a composite surface is being prepared for adhesive. Dillingham presented examples of composites blasted with 80-220 garnet grit. The surfaces look good to the eye, but “we’ve done a lot of damage” to the carbon fibers. “Shockwaves” sent through the substrate by the pounding could produce a fracture below the surface as well, Dillingham said.

BTG found that 220 grit delivered the best results, at almost twice the fracture toughness, because of the lack of “subsurface fracturing,” he said.

Multiple chemical treatment options exist for a metal substrate, but composites can basically only be treated with plasma, according to Dillingham.

Several plasma preparation techniques exist, but atmospheric pressure plasma seems to be the only one truly being adopted, Dillingham said.

It’s expensive, but “you can get really nice performance out of your adhesive joint.”

The plasma treatment chemically modifies the exterior of the substrate and creates precisely the molecular configuration that will achieve effective bond. The only concern would be running the plasma tool too long, according to Dillingham. Prolonged exposure will turn the surface into carbon dioxide and water and disintegrate part of it, he said.

The manufacturer needs to know when to shut off the plasma, typically somewhere between oxidation and chain scission, he said.

At this point, plasma treatment doesn’t sound feasible for the aftermarket. For example, Surfx Technologies sells a hand tool, but it’s $20,000 on top of the $70,000 for the plasma system itself.

None of these techniques will be effective if you don’t know how much contamination exists on the surface prior to the preparation, Dillingham said. How would you know if you removed it all?

“This is really underappreciated,” Dillingham said.

“Development and control of surface treatments for adhesive bonding of composites”

Consistency can be an issue in sanding a surface to prepare it for an adhesive, according to a BTG Labs expert. (uatp2/iStock)

Time proves a major factor in the integrity of a bond interface, according to BTG Labs on a Composites World webinar. Science dictates that such a surface prepped for an adhesive will within a matter of seconds begin to react with other atoms floating about the shop and form bonds with those molecules — reducing the reactivity of the underlying substrate. Lowering the surface energy encountered by an adhesive results in a weaker bond. That process can be seen here with this measurement of energy decay after removing a peel-ply backing from a composite and exposing the reactive surface. (Provided by BTG Labs via Composites World)

BTG Labs chief scientist Giles Dillingham on a Composites World webinar showed a microscopic-level image of the results of scuff sanding and running a solvent wipe over a composite. On the surface, one thinks mission accomplished, “‘that’s not glossy,'” he said. But in reality, the hand-sanding operator missed 20-30 percent of the surface (the flat part at right) — “and this is typical of a scuff sanded surface,” Dillingham said.(Provided by BTG Labs via Composites World)

The concern with media blasting a carbon-fiber composite lies at the microscopic level with the damage to the underlying fibers when the composite surface is being prepared for adhesive. BTG Labs chief scientist Giles Dillingham presented on a Composites World webinar examples of composites blasted with 80-220 garnet grit. “Shockwaves” sent through the substrate by the pounding could produce a fracture below the surface as well, Dillingham said. (Provided by BTG Labs via Composites World)