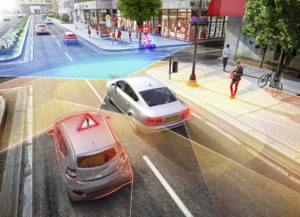 We’ll get into that in a second. But given some of the discussion in the collision industry over the past year, it seems most worthwhile to start by pointing out a feature which, despite having also appeared in prior generations of the device, might have flown under the radar for some shops until now.

“An established strength of Continental’s radar sensors can also be found in the fifth generation,” Continental wrote in a news release late last month. “It is called auto-alignment, and uses a software function to automatically correct deviations from the sensor’s ideal location at its installation location on the vehicle.”

Incorporation of better and better auto-alignment by OEMs and Tier 1 suppliers would be beneficial to shops, as it would seem to remove the logistical and infrastructure hurdles associated with calibrating some advanced driver assistance systems after even minor repairs.

A sensor, camera or radar  which can align itself seems preferable to hoping that technicians or external conditions didn’t slightly or dramatically skew what the car “sees” during the lengthy calibration process — and throw off its ability to maneuver correctly in traffic or protect the driver from collisions. An auto-aligning radar also sounds more forgiving should the tech or someone at a factory have installed the part a millimeter or two off.

Based on an explanation by a Continental spokeswoman, the device is on its way towards delivering some of these benefits, and it even can work to some degree after a collision — which is nice for your customers whose vehicles are still driveable.

However, it sounds like shops will still have to do some calibration, at least for now.

“Yes, it is correct that our radar sensors work without calibration (possible feature depending on the variant),” Continental chassis and safety division external communications manager Miriam Baum wrote in an email. “Auto-alignment always takes place at the start of the journey. A deviation in both directions is possible. So even after an accident, which would not cause excessive deformation on the bumper, the sensor would still work. Nevertheless, OEMs usually still carry out a calibration and control, both at the factory and during replacement in the workshop.”

Asked if the auto-calibration could handle factors like body filler or too thick a paint coating over the radar field of view, Baum wrote, “The whole construction / installation situation is tuned and designed for a specific setup.”

She wrote that major changes would affect the system’s performance.

Even if repairers typically still have to recalibrate cars with the technology, the auto-alignment sounds like a good hedge from a shop owner’s “sleep better at night” perspective. The last SEMA OEM Collision Repair Technology Summit pointed out that while a shop might calibrate a vehicle, there’s not necessarily any way to validate it was done properly, even with a scan tool. (Compared to physical repairs, which lend themselves to destructive tests, torque meters, visual inspections and the like.)

So if you can’t have that confirmation, at least there’s a fail-safe.

Self-calibration matters to shops for such reasons, but OEMs might also have a stake in the technology. The National Highway Traffic Safety Administration in 2016 cautioned OEMs that it might consider “predictable abuse or impractical recalibration requirements” over the life of higher-tech vehicles a safety defect.

“Other commenters suggested that while automated safety technologies may facilitate increased safety, manufacturers should ensure that over the lifespan of the vehicle such technologies themselves do not create unreasonable risks to safety due to predictable abuse or impractical recalibration requirements. The Agency agrees,” the NHTSA wrote in formal Sept. 23, 2016, guidance to OEMs about automated safety technology. “Unreasonable risks due to predictable abuse or impractical recalibration requirements may constitute safety-related defects. … Manufacturers have a continuing obligation to proactively identify and mitigate such safety risks. This includes safety risks discovered after the vehicle and/or equipment has been in safe operation.”

The other reason why body shops should care about what Continental and its rivals do with radar is that its existence could produce fewer crashes to repair by powering ADAS systems and even autonomous vehicles. Continental wrote that more than 30 million of its radar sensors would be in place around the world by the end of 2017, and the Tier 1 supplier is increasing its manufacturing capacity ahead of the start of production on the fifth-generation radar in 2019.

“With the fifth generation of our powerful and tried-and-tested radar sensors, we are opening up new opportunities for modern advanced driver assistance systems,” Continental ADAS business unit head Karl Haupt said in a statement. “Our latest radar generation is an important element in our technology portfolio to further strengthen and advance our leading position in the development of assisted and automated driving. In particular, the elevation measuring capability of our radar sensors allows the most varied of objects, even relatively small objects, to be detected even more precisely.”

Continental said that its 77 GHz radar can deliver “more accurate detection of smaller objects such as a lost spare wheel or an exhaust that has fallen off.” The next generation’s resolution also captures factors like curbstones and “the tails of a traffic jam under a bridge.”

It’s unclear if Continental was referring to its short- or long-range radar, or both. Both the short- and long-range radar have reached the fifth generation, according to Continental.

“With long-range radar, a range of up to 300 m and an opening angle of ±60° are possible in the highest expansion stage depending on the required performance,” Continental wrote in a news release. “With short-range radar, precise parking functions can be executed easily for the first time, in addition to functions such as blind spot detection, lane change assist or rear cross traffic alert.”

The cheapest version of the long-range radar has a 45-degree field of view and can see 200 meters in the distance, according to Continental. The version being developed now can see 60 degrees and 300 meters. Four short-range radar sensors “on the corners of the vehicle” — which sounds like body technicians and painters might need to watch out for them around bumper fascias, quarter panels and fenders — allow “a seamless 360° radar ‘safety belt’ all around the vehicle,” according to Continental.

“Such detailed and seamless display of the entire area surrounding the vehicle is important,” the supplier wrote. “Without it, the vehicle will not be able to take on the driver’s tasks in automated driving. In conjunction with other sensors such as the camera, surround view systems and 3D Flash LiDAR, the goal of achieving an understanding of the vehicle surrounding that is equal to, or better than, that of a human being, is coming that bit closer.” However, Continental said the true achievement of this radar generation was “its compactness and flexible usage.”

“This makes it easier to use them across entire vehicle platforms,” Hammerschmidt said in a statement. “In addition, the fifth generation can be used as a defined interface in the sensor and modular hard and software, either as a stand-alone product or even as a pure radar head without dedicated evaluation.”

Continental said OEMs could use the radar for different vehicle electrical architectures, and it could work with today’s CAN and CAN-FD standard as well as Automotive Ethernet (which we might see a lot more of soon, based on Electronic Design’s coverage of the trend at the 2016 Consumer Electronics Show).

Continental’s fifth-generation long-range radar has a wider field of view, which might help it detect pedestrians and cyclists. (Provided by Continental)