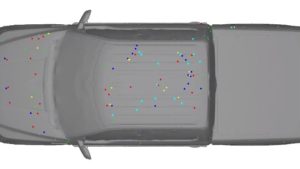 Audatex earlier this month announced a deal for hail photo-estimating artificial intelligence provider CSI to instantly populate an estimate with the time to fix hundreds of dents detected by the software.

The deal is the latest example of how CSI — which also provides paintless dent repair services — can use technology to eliminate inefficiencies within the collision repair and auto insurance process.

If more carriers embrace CSI’s technology, it could make for a smoother, more accurate and more lucrative hail damage experience for collision repairers and PDR subcontractors, based on an overview from CEO Michael Morrison in a recent interview. CSI has worked with a couple of the U.S. Top 10 carriers, and he said insurers are “embracing it.”

CSI’s history of AI hail estimating dates back to Morrison concluding that the traditional methods were “so inefficient” and thinking “‘There’s got to be a better way to do this.'”

His company learned of a German team who was making progress in AI photo estimating. The system, known as Adomea, first came to the U.S. about two years ago, as Morrison recalled.

The accuracy it delivers “has an impact throughout the whole process,” he said.

For those of you who don’t live in hail country, damage from storms is estimated using a manual and subjective method, where a given range of dents based upon coin sizes “equals this,” according to Morrison.

“It’s the best that was available,” he said.

This requires a lot of counting and is very subjective. Counting 125 dents of different sizes — with potentially little difference between those sizes (a quarter and nickel are just 3 mm apart, Morrison said) — can result in a scenario where “you’re guessing,” Morrison said.

But such subjectivity ultimately can lead to $200 swings in the price to repair a particular panel — and an average of seven panels are damaged during a hailstorm, Morrison said. That’s a huge cost for an insurer to eat if overestimated and a shop to lose in business if underestimated.

Seasoned adjusters return a variance of “in the high 30 percent range” when they look at the same car, Morrison said. Conversely, Morrison estimated Adomea’s variance at below 5 percent, with a success rate in finding dents at 90 percent. (As the image below shows, 90 percent might blow a human eye — particularly one weary from a post-hailstorm marathon estimating session — out of the water.) 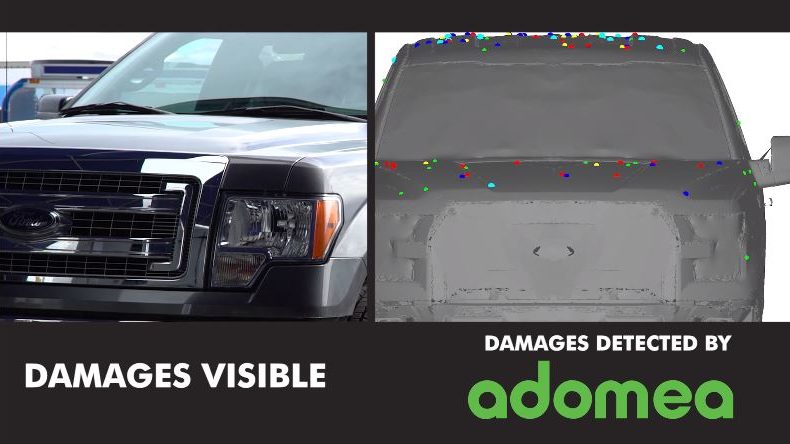 Such an inefficiency builds upon itself when the customer appears in an auto body shop and learns the estimator was wrong, Morrison said.

“Nothing makes the shop more angry” than discovering what was estimated to be a quick paintless dent repair of a couple of panels turns into replacing a roof and hood, Morrison said. As the paint department can be the “choke point” of a body shop, having what was supposed to be 10 PDR vehicles turn into seven PDR and three to be refinished is “just going to bury that shop,” he said.

Such a change also means a carrier has to get back involved, the car sits there and rental time grows.

Adomea avoids subjectivity by quickly taking 1,700 photos of the battered vehicle and analyzing them with its artificial intelligence.

“We’re creating an MRI of the vehicle,” Morrison said.

The company matches what the computer detects to a model of an undamaged vehicle. 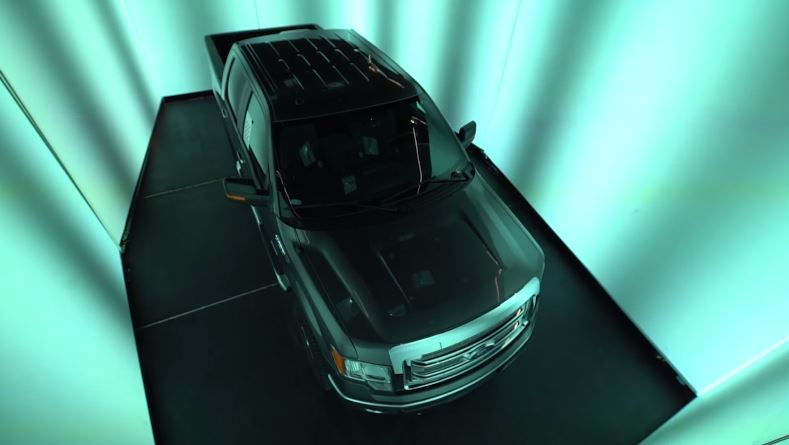 Morrison noted that using AI eliminates the human error of circumstances like a tired adjuster who’s “sick of processing supplements” who overestimates. He also gave the example of personally estimating a panel with a low amount of dents — which led him to move “almost slower,” worried he was missing something.

If Adomea can compare the customer’s car to an undamaged but otherwise identical one in library undamaged vehicles, it can segment the hail-damaged vehicle into panels and produce a more comprehensive price chart.

He said this Adomea capability could handle some modded vehicles, such as an F-150 with a lift kit, but something like a dualie would be a “tipping point” where it no longer could compare it to the baseline truck.

Asked about the concern that Adomea is a black box, potentially manipulated in favor of a repairer or insurer, Morrison said that both the insurers and CSI audits the results. 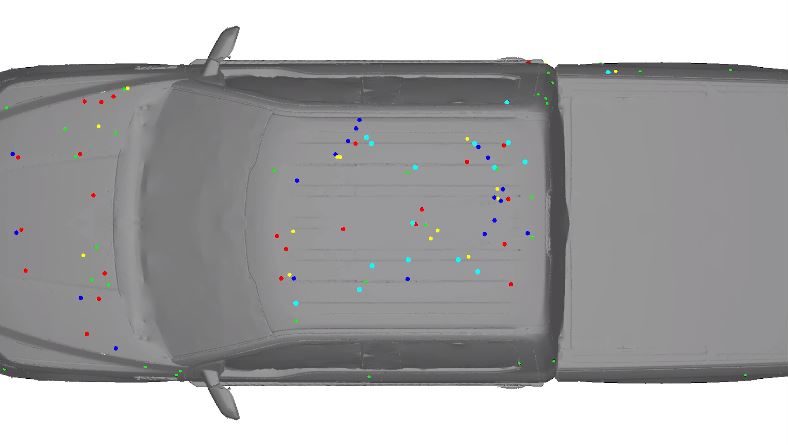 “There’s an interest to make sure it’s right,” he said, and said there was no benefit to putting a thumb on the scale for an insurer client or its own PDR business. Part of Adomea’s sales pitch was the efficiency of getting it right the first time, he said.

Morrison said he couldn’t give an estimate of how much money was actually saved by switching to an AI like Adomea, but some kind of white paper could be coming. “I want that badly,” he said. But it considers that switching to AI photo estimating for hail has a “ripple effect” of about 8-12 areas where it makes the process more efficient, Morrision said. (Audatex in its Dec. 4 news release estimated insurers would have a 33 percent productivity gain.)

Morrison noted that CSI’s client insurers would have their own individual calculations of what had been saved, and some are “now seeing and feeling” the “incremental increases in value” generated throughout the system.

Besides the efficiencies possible in getting the estimate right the first time, the system has the potential to save adjuster time.

An adjuster could manually count those 125 dents in Morrison’s example, decide their size, and write an estimate. Or the customer can drive the car into an Adomea station, which resembles a paint booth. The vehicle sits inside for two minutes while the 1,700 images are captured. The AI then takes another two to 2.5 minutes to process what it’s seen, and the voila, you’ve got tallies of all the dents and their sizes — and “while that post-processing’s going on, the next vehicle’s in there,” Morrison said. 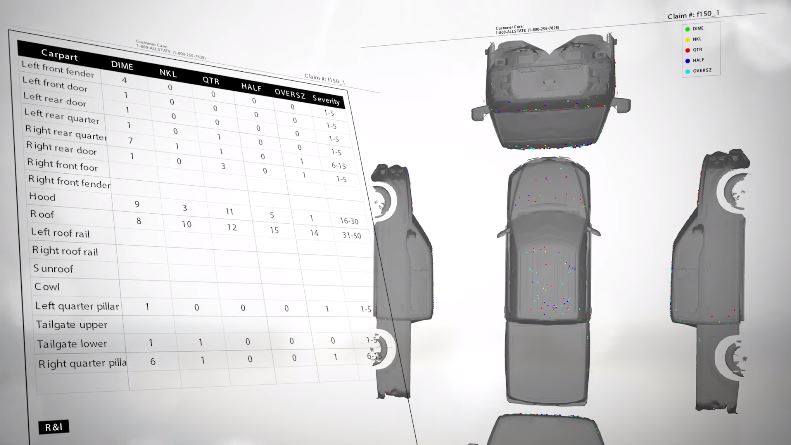 A May Denver Post story describes State Farm using five, maybe six adjuster-staffed booths to process 19,100 hail claims in 23 days (May 8-June 1) Colorado storm. If five Adomea booths were each processing one car and scanning another within the same two minutes, the carrier could blow through all 19,100 claims in less than six days.

“Due to the massive number of vehicle damage claims involved in hail catastrophe events, insurance companies have been looking for a streamlined way to most accurately inspect and assess damages,” Tony Aquila, CEO of Audatex parent Solera, said in a statement. “This global partnership with CSI allows for exclusive integration of two leading services to leverage the most innovative, accuarate and efficient solution for hail catastrophes.”

The new CSI integration with Audatex takes those dent counts and marries them with commercially accepted labor times to produce an estimate, something that before also took “quite a bit” of time, Morrison said.

The deal isn’t exclusive. CSI has talked to all three of the estimating services, and partnered with Audatex first because “they were willing to.”

Integrating with Audatex could also quickly provide an adjuster with a “multiple choice scenario” of estimates modeling different outcome, according to Morrison. For example, a hood replacement might cost $850 while paintless dent repair cost $950, he said. But if replacement took longer and chewed through rental car dollars, the carrier might come out behind with the seemingly cheaper option.

Morrison said Adomea deployment was scalable in a traditional sense — increased demand by carriers or vehicles “aren’t the limitations.” He indicated that the only bottleneck would be in designing the system to fit the particular customer.

CSI is also considering scenarios where its technology could be employed by multiple carriers in an area — set up an Adomea booth after a hailstorm and see “who wants to come.” 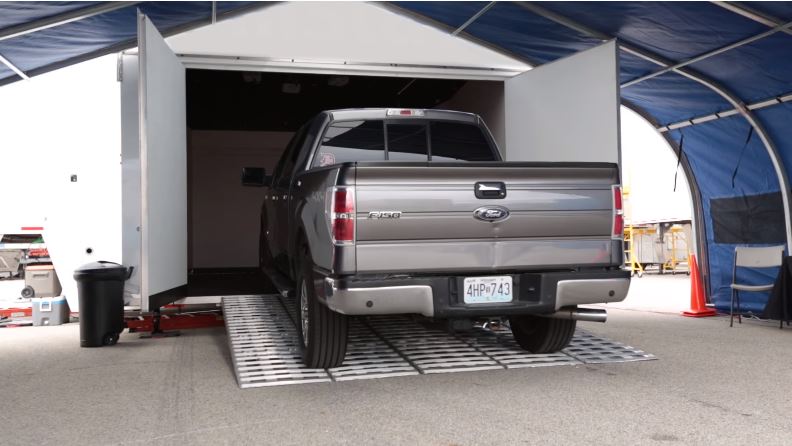 The system also can save money through its ability to flag potentially fradulent vehicles which might have fooled a naked eye.

“We’ve had customers pull out of line,” Morrison said. “… It is a fraud deterrent.”

Morrison gave the example of damage which might fool the naked eye but the computer recognizes as a nonrandom pattern.

Or perhaps the fraudster is only 5 feet tall and can only whack as high as the roof’s perimeter, Morrison said as another example. A computer might realize the flaw in the pattern.

“It makes it a very easy conversation,” he said.