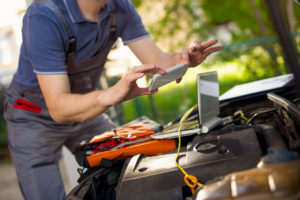 A staff appraiser for a small national insurer this week pushed collision repairers to document every element of a collision repair, describing it as “a little more work, to get paid a lot more.”

The adjuster, whom we’ve agreed to keep anonymous to protect his job, provided a fascinating look at the business from an insurer’s perspective in an interview with us. He strongly encouraged shops to follow the lead of Montana shop owner Matthew McDonnell and his message of “transparency.”

McDonnell, who owns the small MSO the McDonnell Group, in 2017 promoted the idea that documentation gets a shop paid in interviews with us, at a Collision Industry Conference and at SEMA. The Montana repairer has said he learned how to properly document a repair from Collision Advice CEO Mike Anderson and by asking two insurers to teach what they needed.

It’s paid off with what McDonnell said was a 90 percent accounts receivable success rate despite often having “200-line estimates.”

McDonnell teaches “show what you do, and get paid for what you do,” the adjuster said. Label parts, photograph every step of a repair, and provide the OEM information to support what you’re doing.

“You’re going to get paid if you do all of those things, without an argument,” the appraiser said. “… I’ll pay you. Just show me.”

Shops who provide a “half-done estimate with no photos, I’m not paying you,” he said. The insurer agreed that “severity’s definitely higher” for his carrier when this happens, but as so few shops — he estimated 5 to 10 percent — show their work, “Are we really paying that much more?”

“I do not get dinged in no way shape or form,” the adjuster said of his higher severity. The company ceased to grade adjusters on severity. Instead, it cares about factors like “leakage” and how many claims a staffer is handling.

“If it’s required to be there … we will absolutely follow what the OEM standards say,” he said of his company.

“You could teach a 12-year-old to do our job,” he said: If it’s documented, it gets paid. If every shop in the country learned from McDonnell, “insurance companies aren’t gonna like it.”

“Leakage” in this case involves the adjuster paying line items on an estimate without something to support the decision, according to the adjuster.

This reveals why documentation is crucial. You might be frustrated at having to prove your work or expert opinion over and over. But the adjuster will be audited on how much documentation he provides to back up what he paid you, and he needs that material to protect himself even if he knows you’re right.

The appraiser’s company always pays with the documentation, but even if it didn’t, a shop could give the proof of the repair and the OEM instructions supporting it to the customer and let them challenge the carrier for denying something that obviously needed to be done, he suggested.

“If it’s required, it needs to be paid,” the adjuster said.

The real reason many shops aren’t getting paid is “they’re lazy,” he said.

“They don’t want to show in-process photos,” he said.

Are you fixing marks left by a frame machine? Show pre- and post-repair photos. Welding a quarter panel? Do the same. “Show all the damage,” he said.

Is a trunk interior a different color than the exterior? “Show a picture.”  Want to get paid for a painter’s time cleaning their gun? Document it.

Nine out of 10 shops don’t bother showing pre- and post-measurements of frame straightening, so why pay for it?

“That’s the issue that a lot of shops have to insurance companies,” he said.

Asked why a professional opinion wouldn’t be enough, as seems to be the case with doctors, the appraiser recounted one example of a health insurer who had demanded a photo of a surgical procedure.

“It’s pretty much the same thing as us in this field,” the appraiser said.  “… They’re asking for photos as well.”

Asked if he paid a shop for the time they spent collecting such exhaustive documentation, he wrote in an email, “I have never paid for administrative time, I feel that is part of getting paid. If it’s not documented you don’t get paid.”

This adjuster requires documentation to educate himself, survive an audit, and encourage the car to be fixed properly by sending shops to the OEM repair procedures. However, there’s also a cost-containment element as well, he acknowledged. This adjuster pays for his own training into auto body repair. It’s not provided by his company, nor do his colleagues seem to be pursuing it on their own, he said. This training has taught him the importance of certain procedures like scanning, but the knowledge also can be used to suit his needs as a carrier.

For example, the adjuster says he knows he will always pay for scanning; he knows it’s necessary. However, if a shop doesn’t ask for scanning, he doesn’t include it on an estimate.

If the shop is savvy enough to do so, he will approve that line item but zero it out ($0). Once documentation is provided proving the scan — for example, an output showing the codes and the VIN of the car — he automatically pays the shop’s bill.

“I will absolutely pay for it,” he said. “… I don’t question scanning at all.”

This has been convenient for shops who know him — they can go ahead and scan the car, as he won’t fight them on it as long as they ultimately support it with documentation.

The company formally authorized appraisers to pay for scanning in October 2017, but “I’ve been paying it since Day One” without issue, he said.

He said he’s even used his familiarity with OEM repair procedures to nudge a couple of shops eager to learn in the right direction and improve both the repair quality and his own knowledge. If they add a procedure, he’ll ask if it’s what the OEM states.

“I now know if they’ve pulled them or not,” he said. The customer ideally gets a better repair, the claim file has its documentation, and he gets a chance to read repair procedures.

Trying to grow one’s expertise through training can produce situations where the adjuster knows a necessary repair procedure being done. He said his shops who show an interest in learning will get a nudge in the right direction. But he’s not going to include the item for just any shop unless the shop asks for and documents it.

“I know it needs to be done, and they’re not doing it,” he said, calling that a difficult thing.

But at the end of the day, “the shop repairs the car,” he said — he won’t add items that should be done to an estimate just so the repairer will do them. “I don’t say, ‘Why isn’t it on there?'” he said.

“I know it should be on there,” he said, but he said he also knows who pays his salary.

He said he encounters a dilemma “every single day” regarding shop choice; he can’t tell the customer to take it somewhere else if he doesn’t think the shop is correct. He won’t always nudge the customer to ask for the correct repair either,; however, if the policyholder asks the right questions, “I will not lie to them.”

A staff appraiser for a small national insurer pushed collision repairers to document every element of a collision repair, describing it as “a little more work, to get paid a lot more.” (Jovanmandic/iStock)