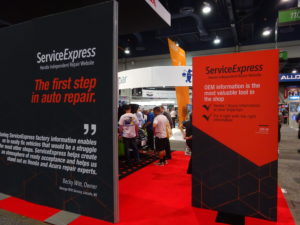 About 11 percent of collision repairers report being paid administrative fees for their efforts researching OEM repair procedures, the final 2017 “Who Pays for What?” survey found.

The tally is “small but growing,” researchers Collision Advice and CRASH Network wrote in a news release Monday announcing the results and encouraging the industry to take the latest quarterly survey before Feb. 1. The 2016 version of the study saw only 7 percent of the few hundred responding shops reporting such consistent payment, up 1.2 percentage points from the prior year.

“Even taking the surveys’ margin-of-error into account, this (the 2017 results) indicates some growth in the percentage of shops being paid such a fee when they conduct the research and include the fee on an invoice,” the researchers wrote.

Regardless of their success, a larger proportion of shops had in 2017 at least attempted to ask for such reimbursement, according to the new study. The percentage of shops who never asked any of the Top 8 carriers for that compensation fell from about 76 percent to 70 percent, according to Collision Advice and CRASH Network.

It seems that such a fee might be used to cover the labor time incurred by whoever pulled the instructions or the price of subscribing to that data for the vehicle, assuming either expense isn’t already incorporated into a different estimate charge.

The most expensive annual OEM repair procedures pass is Ferrari, at $7,800, according to the National Automotive Service Task Force’s OEM service site price guide. Honda/Acura appears to be the cheapest, at $350 per year. (Technically, Hyundai is cheapest at $300, but they don’t make collision repair procedures available in America.) OEMs also offer shorter-term subscriptions of time periods ranging between an hour and six months. 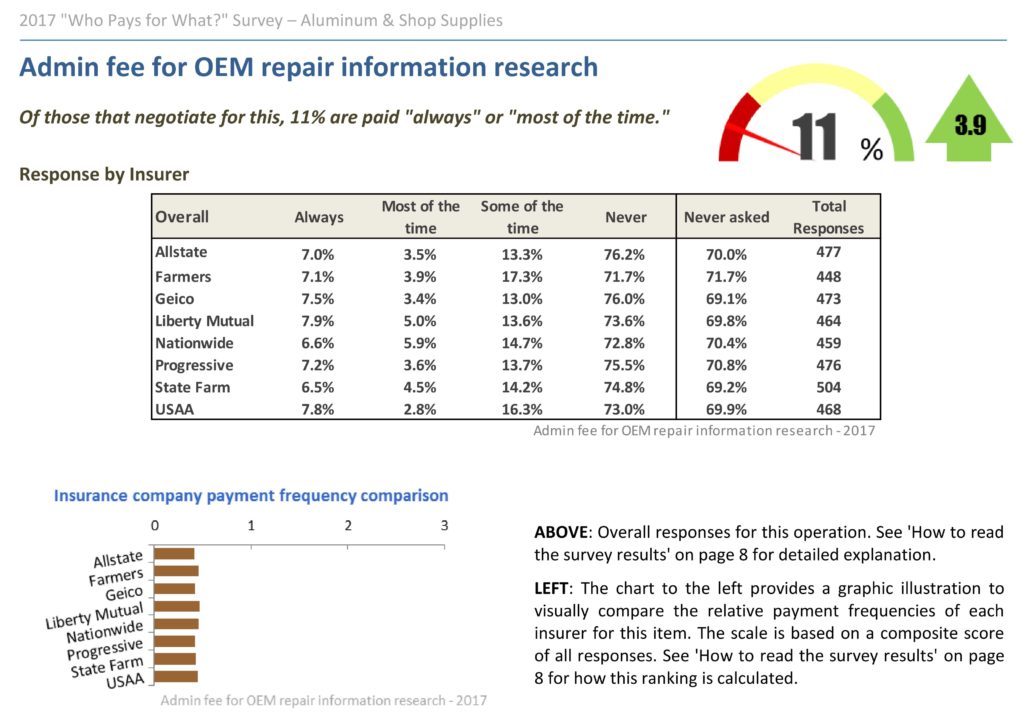 “I’m seeing the typical amount of total sales a single estimator can handle decline, because the estimating process continues to become more complex, including research of OEM repair information,” Anderson wrote in the study. “I’m starting to see a few shops with an employee doing nothing but scanning vehicles and researching OEM repair procedures. I think it will be interesting to watch this moving forward.”

The new study drew 708 responses, though not all of the shops responded to every question. It largely focused on how successful shops had been in collecting when they invoiced various supplies, though queries on aluminum rates and other tasks performed by a shop also can be found. The reports are free to collision repairers.

The “Who Pays?” surveys illustrate the folly of failing to ask for compensation for work done to repair the vehicle.

“It is clear from the results of these surveys that whether or not a repair facility is reimbursed for a particular
item depends, to a certain degree, on whether or not the shop negotiates for it,” the latest study states.

The results also prove that one’s shop isn’t the “only one” in the nation or region asking to be paid for their time or materials, and they disprove any adjuster from one of the Top 8 insurers who insists “we don’t pay for that.”

“More than 87 percent of those taking the survey reported that participating in ‘Who Pays for What?’ surveys is helping them improve their business,” the researchers wrote Monday.

Help the industry by taking the current survey on refinish procedures here through Jan. 31. All answers are kept confidential — data is published only in the aggregate — and participants receive a copy of the report.  Collision Advance and CRASH Network encourage a shop to designate the person “most familiar with the shop’s billing practices and the payment practices of the largest national insurers” to complete the poll.

About 11 percent of collision repairers report being paid administrative fees for their time researching OEM repair procedures, the final 2017 “Who Pays for What?” survey found. (Provided by Collision Advice and CRASH Network)