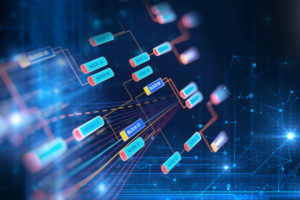 Mitchell announced Tuesday that it would use blockchain technology to encrypt and share data between collision repair industry stakeholders.

The concept was famously described by “Satoshi Nakamoto” as a practical means of allowing and verifying secure online financial transactions without requiring a centralized authority to serve as a clearinghouse. Nakamoto called it “bitcoin,” and the system became the basis for the cybercurrency.

According to IEEE Spectrum, which did a nice job of explaining the system to laymen in 2015, Bitcoin works by having the information of a particular transaction checked (for example, not spending the same money twice), rechecked and recorded by “miners” who allow their computers to handle the CPU gruntwork of that processing. In return for that processing effort, miners are rewarded with an mathematically generated diminishing pool of bitcoin (which keeps the currency from hyperinflation), the magazine reported.

As IEEE Spectrum explained it, the entire blockchain — a constantly growing record of every bitcoin transaction (“block”) ever done — realistically can’t be hacked because you’d enough computing power to beat out the all the honest people on the network:

Say there’s a record in the Bitcoin blockchain that I want to change, and let’s say it’s contained in the 100th block of the chain. Meanwhile, the whole community of miners is already trying to solve block 110. In order to get my change accepted by the network, I would have to serve up my own alternate version of the complete blockchain. I would have to revert back to block 100, tamper with the entry I cared about, and perform the necessary calculations on it. Because all subsequent hashes are dependent on the data that I changed, I would also have to repeat the work on every following block, through to block 110.

If a greedy attacker is able to assemble more CPU power than all the honest nodes, he would have to choose between using it to defraud people by stealing back his payments, or using it to generate new coins. He ought to find it more profitable to play by the rules, such rules that favour him with more new coins than everyone else combined, than to undermine the system and the validity of his own wealth.

Even once the bitcoin pool itself runs out, there’s still an incentive to be a miner in the form of transaction fees.

Though the identities of the individual bitcoin owners and recipients are concealed, the blockchain record of the lifecycle of a bitcoin is visible and transparent. All users trading bitcoin contribute data to the open-source chain and have access to it. It’s like cloud computing, except nobody owns the cloud.

This blockchain format has since been recognized as a means of handling other communications and record-keeping across a disorganized network of parties (see this IDC case study on IBM for some examples). As Mitchell points out, such a network sounds an awful lot like the collision repair ecosystem of multiple industries exchanging electronic information related to a single vehicle repair.

“The ideas of a single entity controlling the data and a single server system being used to ensure security are outdated and do not fit the distributed environment of vehicle repair and collision claims,” Mitchell product delivery Senior Vice President Ravi Nemani said in a statement. “Blockchain, on the other hand, is a modern and more robust method for enabling efficient data exchange in a highly secure environment.”

A single for-profit entity like Mitchell (as opposed to an industrywide nonprofit like CIECA) controlling a blockchain solution would seem to defeat the whole point of the concept, but it sounds like Mitchell indeed has something more decentralized in mind. It’ll be interesting to hear more from the information provider 2-5 p.m. Wednesday at its Project Freedom Experience presentation at the Palm Springs, Calif., Convention Center. If you’re in town for the Collision Industry Conference, register here to attend the Mitchell event. “Mitchell is proposing a collision-centric blockchain community that is a secure yet simple way to share data among trusted industry partners,” the information provider wrote Tuesday. “The technology allows for a simplified, open and distributed ledger that is transparent, verifiable and self-administered by the community. As a trusted partner, a company will be able to validate and add to the chain.”

Mitchell also pointed out the potential cybersecurity benefits of such a system, noting that the Estimate Management Standard and Business Message Suite “languages” used to exchange estimate information aren’t by default encrypted.

“Data security has never been more important than it is today, and given the large number of existing systems and partner dependencies, limited efforts have been made to address the risks associated with estimating information saved in either EMS or BMS formats and stored in thousands of decentralized locations,” Mitchell global product strategy Vice President Olivier Baudoux said in a statement. “Although data have been transmitted over the network through secure protocols for many years, EMS and BMS standards have no inherent encryption mechanism to protect information saved everyday on local computers across the industry. Blockchain is an ideal solution, one where stakeholders enroll to become trusted partners and agree to share data through an open and secure framework. We are working with industry partners, suppliers, repairers, OEMs and insurance carriers to encourage the adoption of this technology across our industry.”

Mitchell announced Tuesday that it would use blockchain technology to encrypt and share data between collision repair industry stakeholders. (monsitj/iStock)

One explanation of blockchain, the system used for bitcoin. (elenabs/iStock)