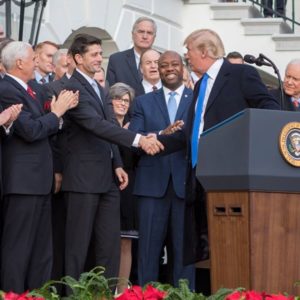 Though the lower corporate tax rate and pass-through income deduction might be the biggest news for a collision repair business owner, the new tax bill contains some deduction-related provisions that shop owners and managers should also consider, according to tax attorneys on a Small Business Legislative Council webinar earlier this year.

Perhaps the most notable for shop owners making huge capital investments — an inevitability given the rise of vehicle electronics demanding scanning and calibration, new welding demands and aluminum requiring additional infrastructure — will be changes in how they can be deducted, as described in the slides from the SBLC presentation delivered by Paley Rothman principal Paula Calimafde and associate Jessica Summers.

Under the bill’s bonus depreciation, a business can immediately write off 100 percent of any investments bought and used after Sept. 27, 2017, and before Jan. 1, 2023, according to the presentation slides.

“This is good news,” Paley Rothman principal Paula Calimafde said on the webinar.

According to Thomson Reuters’ Checkpoint and RIA, Section 179 expensing and bonus depreciation are different. (However, you’ll want to consult with your accountant and/or a qualified attorney on this point and anything else related to your own taxes — this article isn’t intended to be a substitute for either or formal tax guidance.)

The Section 179 deduction grows to $1 million, and the threshold before phase-out grows to $2.5 million, according to the presentation slides. Both values are indexed to inflation from 2019 onward, it stated. What the IRS considers real property now will include “improvements made to nonresidential real property including roofs, heating and air-conditioning property,” a slide states. (So if the roof leaks and the place is too hot or cold, the boss has less of an excuse for not fixing it.)

Attorney: Small-biz owners might get break on ‘pass-through income’ with new tax bill

The 2018 and 2019 tax years will grant businesses a new deduction for paid Family and Medical Leave Act leave, though Paley Rothman associate Jessica Summers said there might be “some movement” to extend the “more bipartisan deduction.”

Under FLMA, employees have the right to 12 weeks of unpaid leave. Under the new tax law, if you felt like paying them during that time, you could deduct “12.5% + .25% for each percent paid above 50% of the employee’s regular rate, up to 25% deduction, of the amount paid to qualifying employees,” according to the presentation slides.

There’s a couple of caveats, according to the presentation slides and Summers. The paid leave must be offered, in writing, to all full and part-time employees and pay at least two weeks at 50 percent of whatever the employee would have made then. The employee must have worked at the business for a year and not make more than 60 percent of the “highly compensated” threshold, which right now is $120,000.

If you’re in a state requiring paid leave, you don’t get to deduct it, however, according to Summers — the deduction only applies to federal FLMA.

Many other deductions are eliminated, though the R&D credit stuck around, the “last-in, first-out” inventory technique remains, and net operating losses can be deductable for up to 80 percent of taxable income, according to the presentation slides.

The tax bill also bans businesses from taking a deduction for payouts on sexual harrassment or sexual abuse settlements with a non-disclosure agreement, Summers said.

However, the definition of a settlement is “sort of an open question,” and regulators will have to work that one, Summers observed. For example, she said, is a routine layoff with a release absolving the company of liability a settlement, even though no specific claim had been brought?

Small-ish businesses get another benefit in that they will be allowed to use the cash method of accounting for up to $25 million of average gross receipts rather than just $5 million, according to Calimafde. The presentation slides stated that anyone with exceptions to that threshold today, such as S-Corporations and partnerships without C-Corporation partners, retains them.