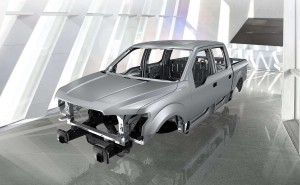 With three years of aluminum F-150s on the road and new editions of some of the most popular vehicles in the country appearing with one or more aluminum part, consumers and insurers might start to see more aluminum-specific labor rates on their estimates.

Data from two high-profile industry rate surveys — the CRASH Network/Collision Advice “Who Pays for What?” study and National AutoBody Research’s Variable Rate System —  offer an idea of what they might find there.

Such rates can be necessary to amortize the cost of aluminum training and gear like a dedicated workspace, tools and vacuum system — even for a single aluminum part on an otherwise steel body. The rates might also be necessary to compensate a technician or shop for the opportunity cost of the extra time spent on an aluminum component.

All three major estimating services now carry the ability for users to generate their own labor rate categories and input the accompanying rate. CCC users had this capability since at least 2015, Mitchell added it in March 2017, and the Database Enhancement Gateway announced in May 2017 that Audatex had done so in a recent software update (the exact date is unclear). CIECA in 2015 announced aluminum labor rate codes would accompany an update to the industrywide Business Message Suite standard.

The recently released October 2017 “Who Pays for What?” survey describes aluminum rates for OEM certified shops “for structural and non-structural aluminum repairs when working on a vehicle make that the facility is certified to repair.” (Emphasis theirs.)

That study asked shops about their aluminum rates for 17 OEMs, ranging from Ford to Ferrari. (Take the latest anonymous quarterly survey on refinish procedures today, the last day before it closes.)

For many shops, insurers and customers, the most relevant data would likely be that reported by the Ford-certified shops, given the F-150’s popularity and the larger sample size of responding shops. In 2017, 142 Ford-certified repairers completed the survey, compared to 173 in 2016.

What’s interesting here is that the Ford-certified shops don’t seem to have increased their aluminum rates year-over year.

The median structural Ford rate (the 50th percentile), was identical for responding shops in 2016 and 2017: $90. The median nonstructural aluminum rate actually fell $3 to $77.

The fifth- and 25th-percentile facilities in 2017 also charged the same amount for Ford structural aluminum as those percentiles in 2016.

A percentile refers to the proportion of respondents who charge less than that amount.

The consistent results seem to suggest the kind of range of Ford aluminum prices insurers, customers, and competitor repairers might expect in a given market — and that that range might by relatively stable.

Help the industry by taking the current “Who Pays for What?” survey on refinish procedures here through Jan. 31. All answers are kept confidential — data is published only in the aggregate — and participants receive a copy of the report.  Collision Advance and CRASH Network encourage a shop to designate the person “most familiar with the shop’s billing practices and the payment practices of the largest national insurers” to complete the poll. However, there is still value and context in examining its national aluminum results and those for Ford.

Nationally, the system has polled about 4,700 shops, though not all of those are going to be providing aluminum data.

Ford-certified repairers reported even higher rates to NABR, which is interesting. Of course, it’s likely that some of the Ford-certified shops carry more intense aluminum certifications and have adjusted their overall door aluminum rates upward in response to those expenses.

A software update granted Audatex users the ability to generate their own labor rate categories and input the accompanying rate, the DEG wrote in May 2017. (Screenshot of Audatex provided by the Database Enhancement Gateway)

The Ford SEMA 2017 booth shows some of the aspects of the aluminum F-150 that make it easier to repair. (John Huetter/Repairer Driven News)