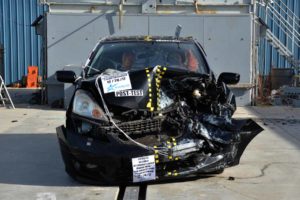 Amid a series of appearances discussing the results, Tracy Law Firm attorney Todd Tracy has released all the data related to the 2017 crash-testing of three Honda Fits.

Variables were introduced into two of the Fits. A red 2009 Honda Fit received Honda-unapproved repairs including a glued roof (Honda demands welds) and an aftermarket windshield (Honda doesn’t recommend imitation parts). A blue 2013 Honda Fit received a variety of aftermarket parts, some certified, some not. An unaltered black 2010 Honda Fit was crashed as a control vehicle. (The 2009-13 Fits are effectively identical from a crash-testing standpoint, according to Tracy and the IIHS.)

Tracy’s testing also examined the effects of the collisions upon a passenger dummy, something the July 2017 IIHS protocol doesn’t appear to require. But as Tracy’s results suggest, the passenger might suffer as well during a collision.

Wanting to disseminate the data as widely as possibly, Tracy has allowed us to provide copies to readers. Get them here on Google Drive. The transparency provides an excellent model for other entities desiring to conduct similar crash testing.

For those who are interested, the IIHS and Honda’s own moderate-overlap crash testing of a 2009 Honda Fit can be found here, though the data shared isn’t as comprehensive as what Tracy provided.

We’ve covered the results of the tests fairly extensively in the past, and these articles might help direct readers into points of interest while perusing the full data release:

However, we did notice one new interesting item regarding intrusion on the driver’s side of the vehicle. The glued-roof and aftermarket-parts Fits see results outside of the “good” range, while the control Fit’s performance never leaves that territory. 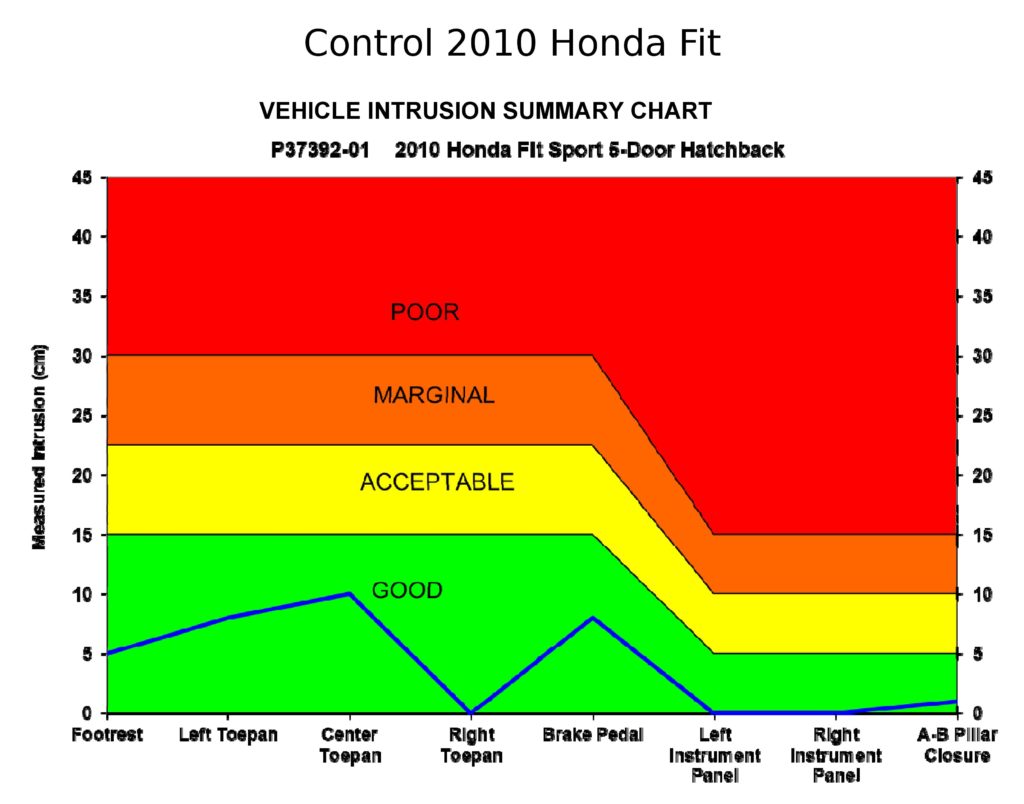 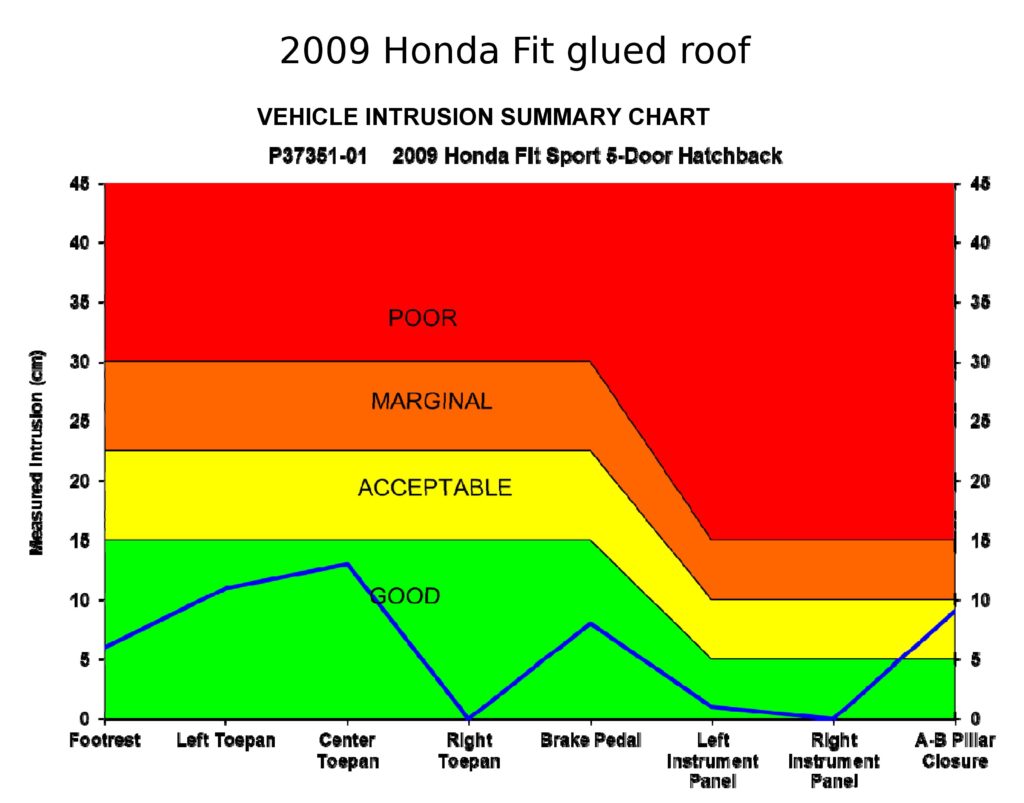 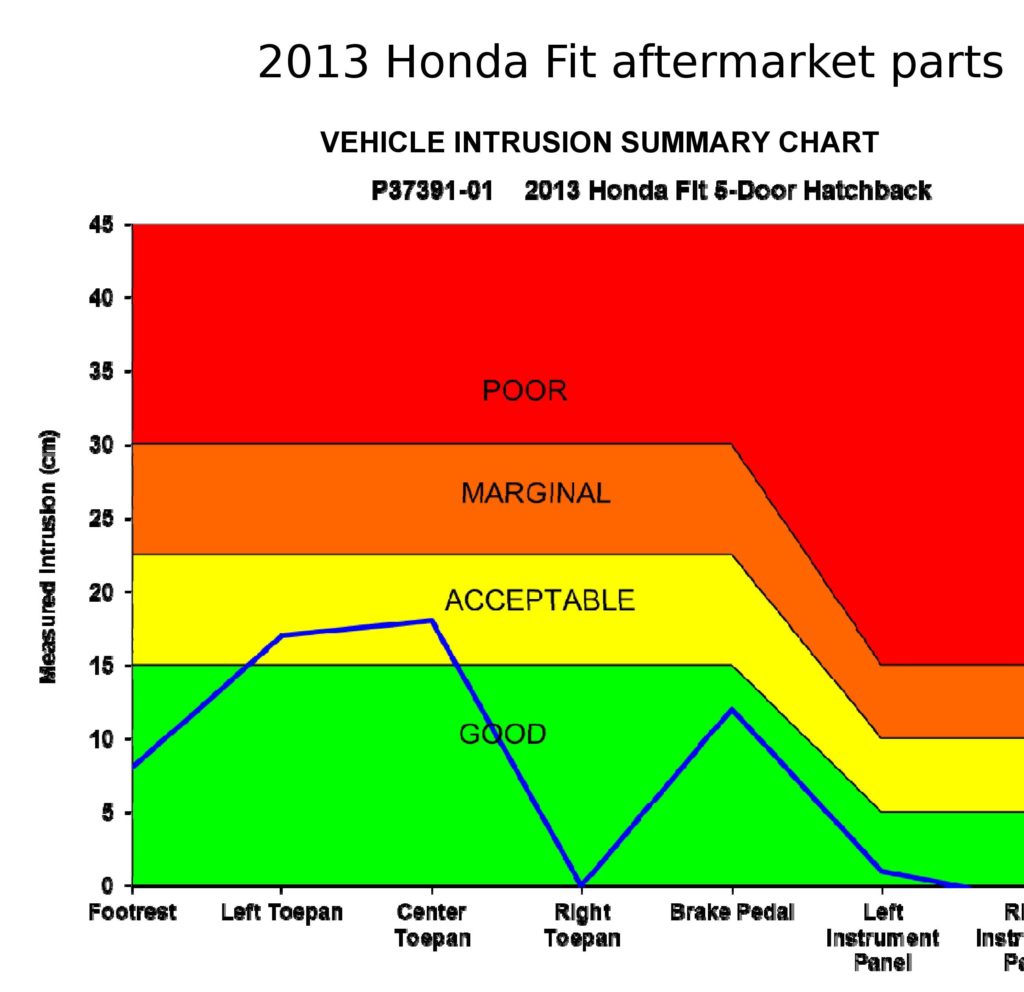 Tracy’s work seems to have touched off additional crash testing; Diamond Standard has pledged to run a Honda Fit 40 mph moderate-offset crash test of one of its bumper reinforcements. It’ll be interesting to see how the results stack up and how closely the testing protocol matches Tracy’s.

Correction: An chart regarding the 2013 aftermarket-parts Fit result demonstrated incorrect results for the A-B pillar closure intrusion. Karco Engineering later determined it had published and charted a typographical error; the real result was 1 cm, not 12 cm. The chart has since been cropped to exclude the erroneous data point.

Data on the intrusion on the driver’s side of the vehicle is shown here for a 40 mph moderate-overlap crash test of a control 2010 Honda Fit. (Provided by Tracy Law Firm)

Data on the intrusion on the driver’s side of the vehicle is shown here for a 40 mph moderate-overlap crash test of a 2009 Honda Fit with alterations including an adhesive-bonded roof. (Provided by Tracy Law Firm)

Data on the intrusion on the driver’s side of the vehicle is shown here for a 40 mph moderate-overlap crash test of a 2013 Honda Fit with multiple aftermarket parts. (Provided by Tracy Law Firm)