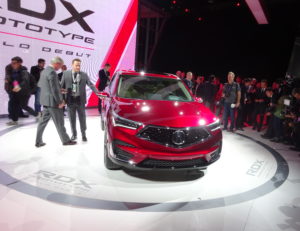 The 2019 Acura RDX’s chief engineer last month provided some details into the skeleton of the next-generation SUV — the first example of an Acura-exclusive platform to hit the market.

“The all-new, third generation RDX has been reengineered on a new, Acura-exclusive platform featuring a lighter and dramatically stiffened body, a sophisticated new chassis and an all-new powertrain,” Acura wrote in a news release.

Acura brought just a prototype of its next-generation 2019 RDX to the North American International Auto Show, but RDX chief engineer Stephen Frey was able to share some highlights of the body and chassis of the actual SUV in an interview after the unveiling.

For a body technician and perhaps for Honda’s engineers themselves, the headliner might be what Frey thought was a “first-in-the-world” hot-stamped outer door ring mated to a hot-stamped inner ring.

“No one else has got that,” he said of the auto industry. A tailor-welded hot-stamped door ring has been a staple of Honda’s latest-generation Hondas and Acuras, but Frey explained that only the outer ring had been hot-stamped on those vehicles; the inner ring wasn’t.

The outer and inner tailor-welded blanks were laser-welded together to form a single, continuous, “incredibly rigid” hot-stamped ring, Frey said. It surrounds the front door and extends backward along the roof and frame rails until “about halfway” between the B- and C-pillars.

The existing door ring already carries significant restrictions upon auto body repair: no sectioning except where Honda tells you to section, and no repair. Honda proved the folly of deviating from these rules by crash-testing an improperly sectioned 2014 Acura MDX, one of the first vehicles to carry the original hot-stamped door ring configuration.

So expect similar, if not more stringent, repair procedures on the 2019 RDX’s more advanced door ring.

Frey said Acura eliminated the temporal side sill found in multibody construction and integrated it into the door ring as well.

“This allowed us to do a variety of kind of interesting things with the seat belt placement and improved rigidity and strength and crash performance,” he said, adding that more details would be coming closer to launch.

Frey said the 2019 RDX will also sport a new platform in the rear of the vehicle. As Acura plans to restore Super-Handling All Wheel Drive, the SUV needed a new rear subframe and suspension, he said. The new design delivers “pretty significant improvements” in lateral rigidity.

The front suspension includes a front McPherson strut, which was “pretty typical” for the segment, according to Frey, though he noted that an Adaptive Damper System would be available.

Besides the laser-welded door ring, collision repairers will notice 37 meters of structural adhesive joining various elements of the 2019 RDX. Asked about plans for aluminum on the exterior of the 2019, Frey said Acura would have more details closer to the launch. However, he said “it’s in line” with what the OEM had been doing for Acura.

Based on our interview and Honda’s Jan. 15 news release, highlights of the next-generation RDX for repairers will include:

The next-generation 2019 Acura RDX will be the first example of a new Acura-exclusive platform to hit the market. A slide highlights the platform Jan. 15, 2018, during the unveiling of a 2019 Acura RDX prototype during the North American International Auto Show. (John Huetter/Repairer Driven News)