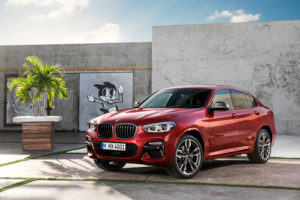 BMW will launch a lighter, next-generation 2019 X4 in July, and repairers can expect higher-strength steels and some aluminum in the body-in-white.

“An intelligent material mix has made it possible to bring about a substantial weight saving, not just in the chassis design but also in the body’s construction,” BMW wrote in a news release. “BMW EfficientLightweight measures led to the increase in the proportion of aluminum as well as high-strength and ultra-high-strength grades of steel. This has made the body structure more solid than ever, serving up benefits for both vehicle agility and occupant protection. Additionally, the car has a significantly lower center of gravity which enhances the Sports Activity Coupe’s cornering dynamics.”

A diagram provided by BMW shows aluminum elements including the strut towers and a small crossmember on the floor. Door rings, rocker rails extending back to the quarter panel, both kickpans, the suspension tunnel and a roof frame crossmember are among the ultra-high-strength steel parts. Multiphase steel elements include the floorpans and roof frame rails.

Such ultra-high-strength steel often can’t be sectioned, heated, pulled or otherwise repaired, an important consideration for BMW certified shops working on the structure, but also a restriction to remember for shops doing cosmetic work on the exterior. A BMW spokeswoman was checking into the metal or metals used in the exterior panels and closures.

The strut towers aren’t the only notable structural aspects of the suspension for collision repairers.

“The design principle of a double-joint spring strut axle at the front and five-link rear axle forms the ideal basis for a harmonious blend of dynamism and comfort,” BMW wrote. “Fitting aluminum swivel bearings, lightweight tubular anti roll bars and new wheel location components at the front axle has brought about a considerable reduction in unsprung masses.”

Other elements which could affect collision repair include:

BMW will launch a lighter, next-generation 2019 X4 in July, and repairers can expect higher-strength steels and some aluminum in the body-in-white. (Provided by BMW)