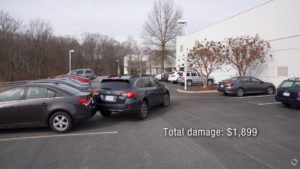 Rear autobraking systems appear to be successful in cutting both crashes reported to police and claims reported to insurers, the Insurance Institute for Highway Safety wrote last month.

The technology works well enough that the IIHS will begin issuing ratings on the technology for consumers and insurers. These scores for now are not part of the criteria needed to achieve Top Safety Pick or Top Safety Pick+ status; they’re an ancillary rating for the market to consider.

The IIHS has found that a General Motors rearview camera combined with a backup camera (required on all vehicles built starting May 1) and parking sensors eliminated crashes reported to authorities by 78 percent. Rear autobraking itself cut 62 percent of GM crashes reported to police, the IIHS announced Feb. 22.

“If all passenger vehicles had a rearview camera, parking sensors and rear autobrake systems that perform like the ones on these GM models, we could eliminate 3 in 4 backing crashes reported to police,” IIHS research Vice President Jessica Cicchino said in a statement.

“In the new ratings program, rear autobrake carries the most weight because research shows it provides the biggest crash reductions. Parking sensors and rear cross-traffic alert get partial credit,” the IIHS wrote. “HLDI has found benefits for parking sensors in reducing crashes reported to insurers, while new research from IIHS shows that rear cross-traffic alert is reducing police-reported crashes.”

Vehicles with rear cross-traffic alerts saw 22 percent fewer backing crashes, and that number increased to 32 percent when the victim vehicle was perpendicular to the test vehicle, which the IIHS called “the most relevant crashes to the technology.”

“Rear cross-traffic alert is a good complement to rearview cameras, parking sensors and rear autobrake,” Cicchino said in a statement. “These technologies should help drivers feel more confident when backing up, especially when their view is obstructed by taller vehicles or garage pillars.” The IIHS reported in August 2017 that rear autobraking following alerts made a difference even in vehicles with a backup camera and other rear safety technology, an embarrassing little revelation about Americans’ driving ability.

The Highway Loss Data Institute controlled for the presence of front autobraking, forward collision warning, the rearview camera, blind spot monitoring, rear cross traffic alerts, front and rear parking alerts, lane-depearture warning or lane keeping (all were present when the vehicle had rear autobraking) when it studied 2013-15 Cadillac ATS, CTS, Escalade, SRX and XTS models with and without the technology package.

“Backing crashes usually don’t occur at high speeds, but damage from the everyday collisions that happen when backing out of driveways and parking spots can be costly and time-consuming to repair,” HLDI Senior Vice President Matt Moore said in a statement. “GM’s reverse autobrake system is helping to alleviate some of these headaches for Cadillac owners. And it’s another reminder that consumers don’t have to wait for self-driving cars to reap the benefits of automated technologies.”

The IIHS also found in August 2017 that a parking camera-park assist combination alone cut backing-into-stuff property liability claims 17 percent and collision claims 7 percent. That study examined the Cadillacs mentioned above and threw in the 2014-15 Buick Lacrosse and Regal, the 2014-15 Chevrolet Impala, and the 2015 Chevrolet Suburban and Tahoe and GMC Yukon.

The new tests award a car “superior” if the rear autobrake means the vehicle either “substantially” cuts down the vehicle’s velocity from the 4 mph test speed or doesn’t crash at all in “many ” of the test runs. An OEM gets an “advanced” if it has rear autobraking that stops the car or cuts the speed to less than 1 mph sometimes. A car merely earns “basic” if it has parking sensors or a cross-traffic alert.

Rear autobraking can eat into collision repairers’ bread and butter mild-impact repairs. Backing a 2017 Cadillac XT5 into a pole produced what the IIHS estimated was $3,477 repair bill, with the bumper cover, bumper beam, quarter panel, tailgate, hitch bar, trim and some brackets damaged. With rear autobraking, the crash didn’t occur at all.

The IIHS also backed a 2017 Subaru Outback into a 2016 Chevrolet Cruze’s rear bumper, resulting in what was estimated at $1,159 in damage to the Outback and $740 to the Cruze. Again, with rear autobraking, the Outback stopped itself from striking the Chevy.

“Let’s face it. Some days we all could use help backing up, whether that’s in a garage with pillars that obscure your view, in a crowded mall parking lot or on a busy downtown street,” IIHS Chief Research Officer David Zuby said in a statement. “The systems we rate in our first batch of tests will help reduce the chances of a backing fender-bender.”

Barely anyone has rear autobraking, which means repairers will have some before the technology starts cutting into their business. The Highway Loss Data Institute estimates it’s standard on 1 percent and optional on 5 percent of the 2018 model year. The IIHS backed a 2017 Subaru Outback into a 2016 Chevrolet Cruze’s rear bumper, resulting in what was estimated at $1,159 in damage to the Outback and $740 to the Cruze. Again, with rear autobraking, the Outback stopped itself from striking the Chevy. (Screenshot from IIHS video)

Rear autobraking and rear-cross traffic alert systems appear to be successful in cutting crashes reported to police, according to the Insurance Institute for Highway Safety. (Provided by IIHS)