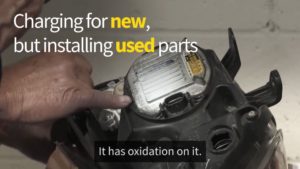 An undercover Aviva investigation into shops recommended by tow truck drivers and CTV’s coverage of the study reveals what Aviva found to be some heinous activities by members of the Canadian collision repair industry.

Aviva, a major Canadian P&C carrier, crashed 10 vehicles, appraised the damage and repair cost, and had undercover investigators wait with them on the side of Ontario highways, according to the carrier and CTV. The undercover drivers waited for whatever tow truck driver showed up and went to whatever body shop the tow operator recommended, according to the carrier and news network.

Seven of the eight shops which received the 10 vehicles (two shops each received two) committed fraud ranging from repairing parts billed as replaced or not performing the work at all, according to Aviva. Some even added damage, Aviva alleged, providing hidden camera footage of technicians seemingly attacking unaffected areas of vehicles.

See a list of Aviva’s fradulent estimate claims and shops’ responses here and see a video interview with one of the accused shop owners here.

For years, insurers have suspected fraudulent activity coming from the automotive repair industry. Aviva believes provincial regulators should have a clear mandate to regulate the insurance industry to identify, deter and prevent fraud. To that end, Aviva is calling for a 5-point action plan from government to:

1. Ban referral fees to take unnecessary cash out of the system (these fees benefit third party suppliers but not consumers).

2. Prohibit blank work orders to ban any supplier from asking consumers to sign them.

3. Allow discounts to customers who agree to use an insurer’s accredited repair network.

4. Force insurers to report all identified fraud and investigation outcomes so that data is shared.

5. Increase penalties for suppliers of goods and services to insurance claims who abuse consumers or defraud insurers

We were appalled by what often did seem to be fraud but wary of the notion that seven shops reflected the entire industry, and we asked leaders from two major auto body Canadian trade groups to respond. Here’s their reactions:

John Norris, executive director of the ‎Collision Industry Information Assistance, provided a copy of a letter sent to CTV station W5 and Aviva. Here’s an excerpt:

Thank you for airing the W5 program investigation on Project Bumper.

The investigation shows hugely inappropriate activities involving some repair facilities, but only a few shops that frankly, were not on the association’s  “radar” and were seemingly  and understandably active in avoiding our scrutiny.  The vast majority of shops attract customers from good work and honesty.  These few shops appear to only find work if they can pay the tow operator for it and then inflate the costs of repair to cover that payment.   Payments that are in violation of the new tow truck legislation in Ontario. Some of the tow truck drivers in your program suggested “their” bodyshop is “certified” by a car maker.

No car maker would tolerate this shop behavour.

Consumers should always be on guard when tow trucks show up at an accident scene and recommend repair facilities.

Consumers (and insurers) should have a greater degree of trust and security in what happens when their vehicle is given to a repair facility.

For an industry like collision repair, this program serves to remind the large number of legitimate repair facilities that some operators continue to give the industry sad examples of a few shops that do not reflect the advances made in the industry to ensure consumer trust and safety. Since 2002, the collision repair industry in Ontario has worked to assist consumers and stop the kinds of abuse seen in your program. Nine shops do not an industry make, nor are they reflective of the care and confidence given to our industry by the majority of car owners and insurers.

The answers to this challenge are clear:

The Collision Repair Standards Act of 2002 legislation  was passed but not put into regulation by Ontario.  This Act, once passed, would have allowed a management of collision repair shops that long ago would have eliminated the problems you witnessed.

The work done by our industry trade  association, Collision Industry Information Assistance (CIIA) with Ontario, two years ago to enact new towing rules and control the “chase” or “vulture” tow trucks that get kickbacks from some shops (leading to false invoicing by the shop to recapture those excess fees) would work to stop this abuse, yet little enforcement is coming from the province.

Shop technicians are required to possess a skilled trades license in this industry issued by the Ontario College of Trades. It is unlikely that these workers would meet that legal criteria.  If they did, the College could take action against them and can revoke their ability to work on cars.  Again, although enforcement is  active, any future actions often rely on funding to ensure compliance. Technician and repair facility information from those found to violate these skilled trades standards  are public and posted on the College’s web site.

Because the Collision Repair Standards Act was not enacted, industry has moved ahead and created accreditation and standards programs, which still remain voluntary without the province’s assistance. These accreditation and audit programs, often offered by the “banner” or “chain” repair facilities  and often through insurance company “preferred” shops, as well as industry generated provincial accreditation standards and audit program like “RoadTrust”, serve to commit to an improved and professional industry.  As you can note from your program, our association and the industry lacks the enforcement tools from the province  to make this work with shops that may not want to (or can’t) meet the standard.   Sadly, this challenge with the small number of repair facilities you identified could have been avoided if industry was allowed to correct it with Ontario enacting the legislation that industry provided to them in the past.

Insurers can help themselves by reporting abuse and fraud, allowing their customer survey satisfaction reports to finally become public and simply following the recommendations already provided to them to not pay for repairs from un-accredited repair shops that don’t meet a minimum standard and not paying for repairs at facilities that do not have the mandatory skilled trade licensed staff.  Cutting off insurance funds to repair shops that are non-compliant is the first and easiest way of ensuring good quality repairs and eliminating the abuse shown on your program. (and lowering premiums!)

Consumers are allowed to use any repair facility they want, but as an industry we have an obligation to ensure that the shop has the ability, skill, competence, honesty and customer care to perform that job well.

Our industry continues to offer our co-operation with insurers and government to make these reported “horror” stories a thing of the past.

Automotive Industries Association of Canada President Jean-François Champagne said Aviva’s findings made it sound like most of the collision repair industry was behaving badly.

Any fraud that did exist “needs to be investigated” and “taken care of,” he said.

He said his group was pursuing a form of certification (different than Norris’ and separate from OEM programs) which would be brand-agnostic. AIA’s certification program has a code of ethics, and anyone caught breaking it would be bounced from the program, according to Champagne.

Tow referral fee ban. Champagne said he didn’t think that a business relationship between a tow operator and body shop was directly correlated to a poor quality repair. He agreed a similar relationship existed between insurers and direct repair program shops.

Blank work orders weren’t really a concern, Champagne said. Shops typically gave an estimate to the customer, as they did in the U.S., he said.

Discounts to customers who chose to use a direct repair program shop — the U.S. health insurance model — ran contrary to the Canadian shop choice rights, he agreed.

“The consumers’s choice remains a principle,” he said earlier.

On Aviva’s suggestion of insurers sharing fraud information, there would be a question of ensuring that legitimate businesses aren’t affected, he said. We could see issues if a shop didn’t know it was being flagged as fradulent or couldn’t contest it — kind of like having an unjustified blemish on one’s credit report — or if the existence of an investigation, even if the shop were cleared, was being unjustly held against the repairer for steering or other claims purposes.

Finally, Champagne said he’d leave it up to lawmakers if the fraud penalties needed to be tougher.

On the whole, he viewed a self-regulatory model like AIA’s own as preferable to a government-imposed model.

A couple of other Canadian industry voices deserve mention.

Darryl Simmons, publisher of our Canadian content-sharing partner Collision Repair Magazine, has posted online a copy of a letter he sent to W5. He pointed out how Canada’s shop choice law means drivers can and do research and select their own shops.

“Your team’s recent television broadcast report on a select few bodyshops specifically in the Toronto area raised the same concerns of the vast majority of the 5000 or so professional and legitimate collision repair facilities across the country; namely that the tactics used by a small number of shops are tarnishing the reputation of an industry dedicated to preserving public safety on Canadian roads. Some of the recent improvements towards a self-regulated marketplace include certification, advanced technical training, as well as pre-and post-repair scanning.”

“Perhaps the investigative piece should have been directed more towards the tow truck operators. Their ‘steering’ to certain repair facilities is not indicative of the common practice of drivers selecting their own location for repair, or asking the insurance company for guidance.

“Your report, although somewhat misleading, is certainly timely as it coincides with the industry’s consistent open conversation for the betterment of itself and how to eliminate those few who tarnish the reputation of the many.”

Finally, CARSTAR also issued a statement following the report, praising CARSTAR Concord for being the only collision repairer Aviva found to have behaved above-board.

Asked by CTV reporter Kevin Newman about shops’ claims that it’s hard to do the right thing in a tough industry, CARSTAR Concord owner Adrian Vegnaduzzo said he didn’t have that problem.

“It’s actually easier to do it the right way the first time than to do it wrong and then trying fix something that’s wrong,” he said.

“We’re proud to say that Adrian Vegnaduzzo, our franchise partner at CARSTAR Concord, delivered the highest standards in collision repair and made us all proud of the work that each and every CARSTAR across Canada does on a daily basis,” Macaluso said in a statement. “While we can’t speak for other repair facilities, CARSTAR works hard to deliver the highest quality collision repairs and excellent customer service.  Our franchisees are entrepreneurs who take pride in serving their customers and their communities.  We are proud that they are committed to providing honest, ethical and fair service for their customers.”

Featured image: An undercover Aviva investigation into shops recommended by tow truck drivers and CTV’s coverage of the study reveals what Aviva found to be some heinous activities by members of the Canadian collision repair industry. (Screenshot from Aviva video on YouTube)