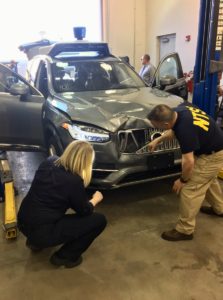 The San Francisco Chronicle has reported that Tempe, Ariz., police Chief Sylvia Moir said video evidence suggests even a human driver might have been unable to stop the fatal collision between an autonomous Uber and a pedestrian.

Moir told the newspaper “it’s very clear it would have been difficult to avoid this collision in any kind of mode (autonomous or with a human) based on how she came from the shadows right into the roadway.”

She also told the Chronicle, “The driver said it was like a flash, the person walked out in front of them.”

Tempe police said the victim, Elaine Herzberg, 49, was traveling west to east “outside of the crosswalk” in the vicinity of Curry Road and Mill Avenue when she was struck by a Volvo XC90 operating in autonomous mode. The Chronicle also reported that the driver was pushing a bike laden with plastic shopping bags; it’d be interesting to see if the system had any issues figuring out what object it was “seeing.”

The National Transportation Safety Board was investigating the incident.

“The investigation will address the operating condition of the vehicle, driver interaction with the vehicle and opportunities for the vehicle or driver to detect of the pedestrian,” the NTSB wrote Wednesday. It said its Tuesday activities included:

• Meeting with representatives of Uber, the National Highway Traffic Safety Administration and the Tempe Police Department
• Beginning examination of the accident vehicle, a Volvo XC90
• Beginning examination of the accident site
• Viewing a copy of a video that captured the crash from an aftermarket dash camera mounted in the test vehicle
• Gathering information about the technology on the test vehicle
• Collecting information about the pedestrian and the safety driver
• Beginning collection of any and all electronic data stored on the test vehicle or transmitted to Uber (Minor formatting edits.)

Another development: An Arizona Republic-Associated Press story reports that the Uber backup driver, Rafaela Vasquez, 44, served nearly four years in prison for felony attempted armed robbery of a Blockbuster Video deposit in a 2000 incident and misdemeanor unsworn falsification at an unspecified date.

Uber has a policy of offering second chances to former convicts who’ve “paid their debt to society,” arguing that “Everyone deserves a fair chance.”  Vasquez appears to have deserved its trust and that of a probation officer quoted in the article — she hasn’t committed a crime since being released from prison in 2005 — 13 years ago — according to the Arizona Republic-AP story.

So far, this appears to be yet another example of a high-profile autonomous crash where a human — in this case, the pedestrian — was at fault. That’s another point in favor of the systems being an effective way of reducing the 94 percent of collisions attributable to human driver error — a scenario which doesn’t bode well for the collision repair industry.

On the other hand, Luminar co-founder and Chief Technical Officer Jason Eichenholz pointed out during last week’s Automotive World Megatrends Detroit, that this future could be years off. Eichenholz, whose company makes LiDAR for self-driving cars, demonstrated that disengagement rates for autonomous vehicles being tested — a measure of every time the computer can’t handle a situation and hands off to the backup driver or the backup driver felt he or she needed to take over — are higher than crash rates of normal cars. We’d also direct repairers to the involvement of the NTSB. Should a private passenger vehicle operating in autonomous mode crash, such as a Cadillac CT6 in “Super Cruise” or an Audi A8 with similar hands-off-the-wheel autonomy, it’s possible that these officials — who dig deep when they investigate something — will examine whether the correct repair and recalibration occurred. This process will not be a comfortable one for a shop who failed to follow OEM repair procedures.

Here’s the NTSB report on the high-profile Florida 2016 Tesla crash — in which the agency took a more critical view of Tesla’s system design than NHTSA’s Office of Defects did. You’ll note it examines the condition of the vehicle’s suspension, electronic data from the vehicle, and diagnostic trouble codes:

Investigators examined the major mechanical systems on the car, which included the powertrain, steering, braking, and suspension systems. They identified no anomalies within the major vehicle systems.

“Collision Between a Car Operating With Automated Vehicle Control Systems and a Tractor-Semitrailer Truck Near Williston, Florida May 7, 2016”

The National Transportation Safety Board on March 20, 2018, tweeted this photo of its investigation into a self-driving Uber Volvo XC90 crash in Tempe, Ariz. (Provided by NTSB)

Luminar co-founder and Chief Technical Officer Jason Eichenholz pointed out during the 2018 Automotive World Megatrends Detroit that disengagement rates for autonomous vehicles being tested — a measure of every time the computer can’t handle a situation and hands off to the backup driver or the backup driver felt he or she needed to take over — are higher than crash rates of normal cars. (Luminar slide; John Huetter/Repairer Driven News)