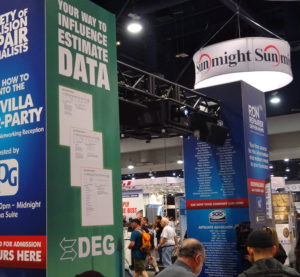 Here’s some areas spotlighted as tip-worthy by DEG. To receive the tips as soon as DEG releases them, like/follow the DEG’s Facebook and Twitter feeds. (It also posts videos to a YouTube channel once in a while.) Or just browse the more than 10,000 inquiries and responses in the database and see what else you learn.

When sectioning times aren’t in CCC

The estimating services’ labor times are generally based on installing new, undamaged parts on new, undamaged cars. This might leave shops and insurers without a labor time related to sectioning an individual part. According to a November 2017 tip from the Database Enhancement Gateway, this information might need to be entered manually in CCC.

“Some OEM’s allow parts to be sectioned or partially replaced at a factory seam,” the DEG wrote. “When this repair option is being considered and no section time is available, the user can still enter a manual entry labor time agreed upon by all parties and still show “section” on the estimate to be compliant. It is important to follow OEM Procedures and Bulletins posted by the OE to ensure proper repairs are being completed.”

In terms of installing the part, CCC treats a sectioned component like a complete one, but allows for the possibility that manual adjustment might be necessary based on the “collision scenario and/or the sectioning approach chosen.”

“The labor time premise (included / not included operations) for a sectioned panel is considered to be the same as for the full panel replacement, unless otherwise specified in a footnote attached to the sectioning operation,” CCC’s MOTOR Guide to Estimating states. “The on-the-spot evaluation will define inclusions/non-inclusions unique to the collision scenario and/or the sectioning approach chosen.”

Common sense and best practices dictate that a technician — even one with an automatic welder — perform destructive test welds prior to going to town on the customer’s vehicle. This message was recently driven home by Collision Advice CEO Mike Anderson’s discussion of two of what he said were multiple OEMs requiring the work.

In July 2017, we observed that CCC and Audatex classify test welds as not-included procedures but we couldn’t tell from Mitchell’s P-pages how it handled the action. The DEG, which is the true expert on matters relating to all three estimating services, in a December 2017 tip confirmed that destructive tests are not-included in Mitchell’s times. (Thanks, DEG!)

“Destructive weld testing is NOT INCLUDED in labor allowances in Mitchell estimating system,” the DEG wrote. (Emphasis DEG’s.) “The cost of materials associated with weld testing is also NOT INCLUDED in the labor guide. It’s important to follow OEM repair procedures and bulletins posted by the OEM and I-CAR for proper welding machine settings, welding wire allowance, as well as weld thru primer allowances.”

Drilling holes for sensors not included

Not all replacement parts come with holes for all of the technology that needs such an opening. Not only will a shop have to drill the holes themselves, but they’ll have to manually enter the necessary operations themselves on the estimate. According to a December DEG tip, creating the openings is a not-included procedure in all three estimating services.

“When ordering replacement parts, the part may not come with the appropriate mounting holes for installing park sensors or side marker lights,” the DEG wrote. “If a part needs to be modified to accept PDC or side marker lamps, additional labor should be considered on the estimate/work order. If no time is available in the database for this labor, an on the spot evaluation should be considered with all parties involved.”

It quoted all three estimating systems to demonstrate the not-included nature of the work.

CCC: “Drilling, modification or fabrication of mounting holes” is among the list of not-included operations.

Mitchell: “Rework Parts to fit a particular year or model (example: cutting holes for lamps, modifying a radiator support)” is not-included, according to the Mitchell P-Pages. (Minor formatting edits.)

The DEG also observed that some OEMs might have a specific tool to create the holes, and it directs shops to “Reference the OEM workshop manuals, EPC for notes, procedures or supersede documents for the most current information available.”

OEMs might sometimes also send you “an ‘Assembly Line Component’ that may include additional ‘Service Parts'” instead of a “‘Catalog Service Part,'” according to the DEG. It wrote in December 2017 this can mean a shop or insurer using CCC will need to manually enter some not-included labor related toward obtaining the part they actually wanted:

An “Assembly Line Component” may require removing “OEM Spot Welds” and separating a “Sub-Component (Service Part)” from the “Main Assembly” this is considered a “Partial Part Replacement.”

The time necessary to perform this type of operation should be estimated after an on-the-spot evaluation of required procedure.

If the “Assembly Line Component” is to be replaced as received, the time required for Full Replacement should be determined after an on-the-spot evaluation of required procedures.

It provided an example of a Honda Civic inner that needed to be trimmed at a factory seam.

The DEG in January explained that an Audatex line item for “‘Combination,Frt Susp'” overlap was “considered labor to raise and support the vehicle.”

“This overlap is in conjunction with another labor value on the repair order,” the DEG continued.

It referred shops and insurers to the Audatex Database Reference Manual, which defines “Combination Suspension” as “The Audatex term for raising and supporting a vehicle.”

And speaking of raising and supporting stuff, here’s a bonus piece of advice from Audatex’s FAQs that we noticed while working on this article:

Question: Why does the labor report only show minimal labor related to the engine and mounts (Combination Engine) when the engine must be suspended using a special tool?

Answer: There are a number of different tools and methods that could be used to support a drivetrain. Each may require different levels of preparation. The Audatex labor allowances do not take into account any special equipment or procedures necessary to prepare the drivetrain to support and only allows the labor to raise and support (Combination Engine) after the engine is prepared for the support tool and any special tools are mounted.

An ad for the Database Enhancement Gateway can be seen on the 2017 SEMA booth of the Society of Collision Repair Specialists. (John Huetter/Repairer Driven News)

Time to section a part might need to be entered manually in CCC. (CCC screenshot provided by the Database Enhancement Gateway)

The DEG in January 2018 explained that an Audatex line item for “‘Combination, Frt Susp'” overlap was “considered labor to raise and support the vehicle.” (Audatex screenshot; Provided by the DEG)