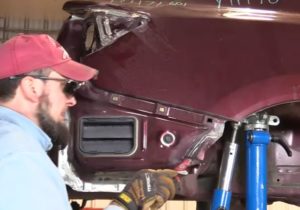 But if that weren’t enough to put the issue to bed, consider this: Revising ones technique to make the donor part theoretically suitable would cost more than the price to install a new quarter — defeating the entire rationale for a customer or insurer wanting a used panel.

That assessment made up the second half of a “Repair University Live” broadcast last month in which experts walked shops not just the scientific and liability realities but also the financial reasons why a used quarter panel wouldn’t fly. The show featured what Collision Hub CEO Kristen Felder called a hypothetical “Fairyland” scenario in which installing a used 2015 Honda Civic quarter panel wouldn’t run contrary to science and OEM repair procedures and expose the shop to liability — and proved that it still made no financial sense for an insurer, shop or customer.

Let’s stop for a second and remind everyone what’s being discussed here:

This is a purely theoretical exercise, and Honda’s participation doesn’t mean these are actual OEM repair procedures or the automaker approves of installing a used quarter panel. (It doesn’t.) There’s zero guarantee the process of harvesting quarter panels in the fashion described on the show would actually result in a used quarter with the same quality and safety as a new one if a shop, insurer or vehicle owner were foolish enough to eat the extra cost and liability and pursue this for a customer car.

Everybody got it? OK, on to Fairyland:

Vehicle Collision Experts CEO Mark Olson said that how a part would be removed differs from how a new part would be installed. Because of this, the used quarter panel can’t be removed in the typical fashion of drilling or file-belt-sanding it off from the exterior quickly and throwing it away.

For the 2015 Honda Civic featured on the show, a repairer would have to drill out the used part from the backside of what Felder called a “donor chunk” to remove it and keep it suitable for installation on the new vehicle, according to Olson.

“It’s going to take longer cause we’re going to have to surgically remove the part” without destroying it, Olson said.

“You got two R&Is,” Montanez said, noting that some shops didn’t think about the extra labor.

“It’s more time to take a panel off than it is to weld it back on,” Montanez said. He gave the example of a 13-hour quarter panel involving three hours of welding and 10 hours of removal. It might wind up being 20 hours just to remove both panels — before one even gets to the welding, he said. 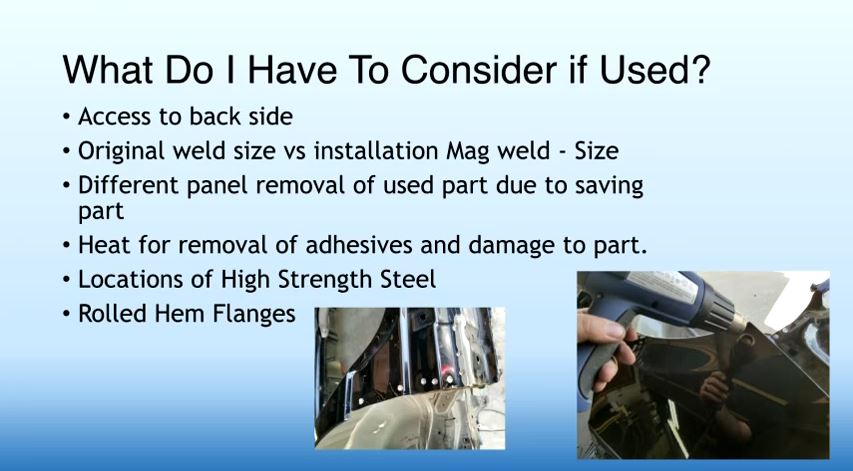 Drilling out the panel from the backside also means that one might possibly be drilling through higher-strength steel, perhaps even 980-megapascal or 1,500 MPa steel for some OEMs, whereas drilling from the front only involves milder steel, according to Olson.

The difference means tools like a triple-fluted tungsten carbide bit are now needed to drill out the part, according to Olson. (Montanez said file-belt-sanding wouldn’t work because of a lack of access and a fear the heat generated could compromise the outer panel.)

One is not only expending “lots of extra labor” but also additional material, according to Olson. “Drill bits aren’t cheap,” he said.

Adhesive might add an extra wrinkle to the removal of the used quarter panel. Removing it takes heat, but it’s difficult to warm up the glue and remove the part quickly enough that some of the glue doesn’t lose heat and recure, according to Olson. The necessary heat could also compromise the donor outer quarter panel, he said.

A shop also must remove the part carefully enough to preserve a body line should one exist, Felder pointed out; it wasn’t fair to a customer to have the line reestablished with “a gallon of filler,” she said.

A Honda representative’s attempt to safely remove a used quarter panel for the purposes of the show also left additional steps needing to be completed after the part was separated from the donor inner.

“Quarter still needs clean up to install and did incur some damage where the adhesives did not release,” Honda wrote. The OEM also pointed out seam sealer locations. 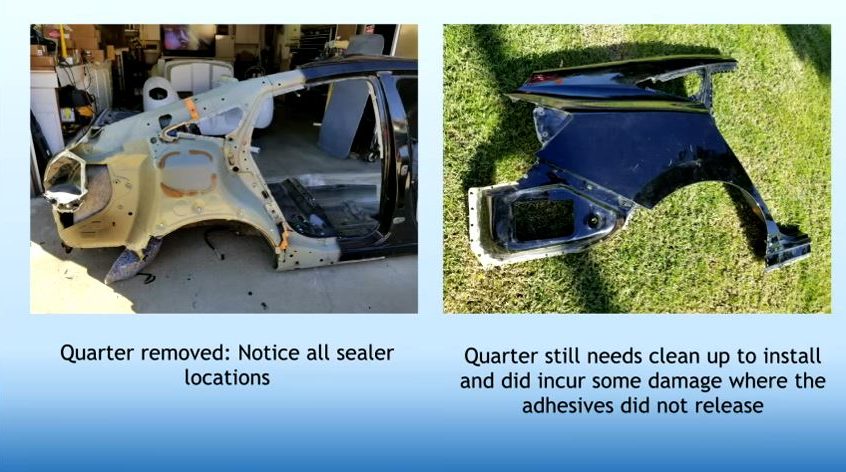 “Integral things we’re going to have to do” still existed, according to Olson, leaving “a lot more steps” before the used quarter was ready to be installed. Contrast that with just pulling a new, e-coated panel out of the box, Felder observed.

The shop must remove items like rock guard and seam sealer off the used panel to make it viable, she said — even more steps not necessary during a traditional quarter panel R&R.

The show presented a Database Enhancement Gateway list of not-included operations that still might be required, such as pressure-washer cleanup and removing glass, filler and paint — adding additional labor time and cost. Dents and scratches might also need to be fixed, according to Olson and Felder.

“That’s not cleanup time” or adequately compensated by a discount from the auto recycler, according to Felder. Montanez gave the example of an offer to “‘knock 50 bucks off'” a $300 used part, which he described as ludicrous if the part took three to four hours to prepare.  The average body labor rate in 2017 was $48.85 in 2017, according to CCC’s 2018 “Crash Course.”

“They just don’t understand,” he said.

Two or even four hours of cleanup time simply wasn’t going to be sufficient, said Felder, noting “we can beat this to death.” 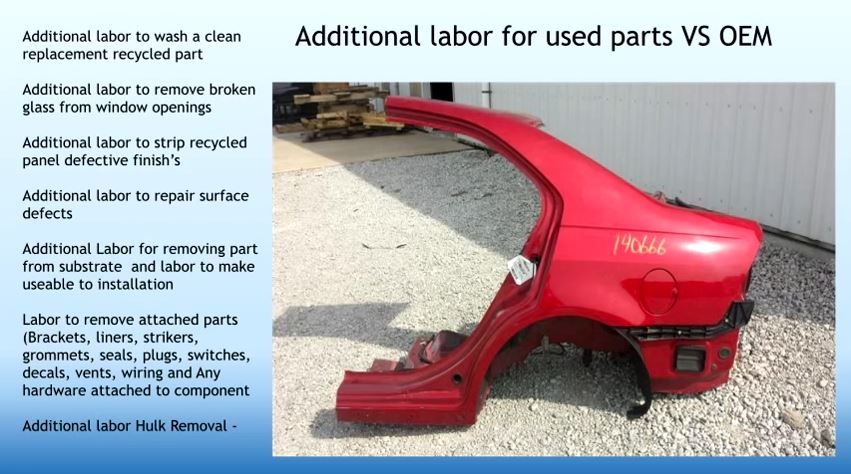 Finally, someone must haul the rest of the “donor chunk” somewhere to be junked in another not-included operation, according to Felder. This might not be a problem in the Midwest, where land is plentiful, but in New York City and other East Coast states, a shop might need to cut the component apart to fit it into a dumpster, according to Montanez. That’s additional labor as well.

Shops needed to think of a used quarter panel as “removing the panel times two,” according to Felder, and Olson called it actually “times-two-plus.”

Ultimately, the notion of installing a used quarter panel is defeated by “pretty simple math,” according to Olson.

It looks good “off the top,” Felder said, though Montanez challenged, “Somebody’s life is worth 300 bucks?”

But it actually makes no fiscal sense to an insurer or customer. “I gotta add all this extra labor now that’s not part of the R&R time,” she said.

The “Repair University Live” used a conservative estimate of 6 hours of additional labor, though Olson noted “that six is kind of a minimum” and the show’s attempt to remove a viable used quarter properly took longer.

At 6 hours at what CCC reported was the average $48.85 labor rate (a tally that lumps DRP rates in with door rates), the used quarter panel’s price climbs to $636.85. Now, to use Montanez’s line, you’re risking someone’s life and the shop’s liability to save six bucks. If the tech supplements an extra 12 minutes on the used quarter panel, it’s officially not cost-effective compared to new. 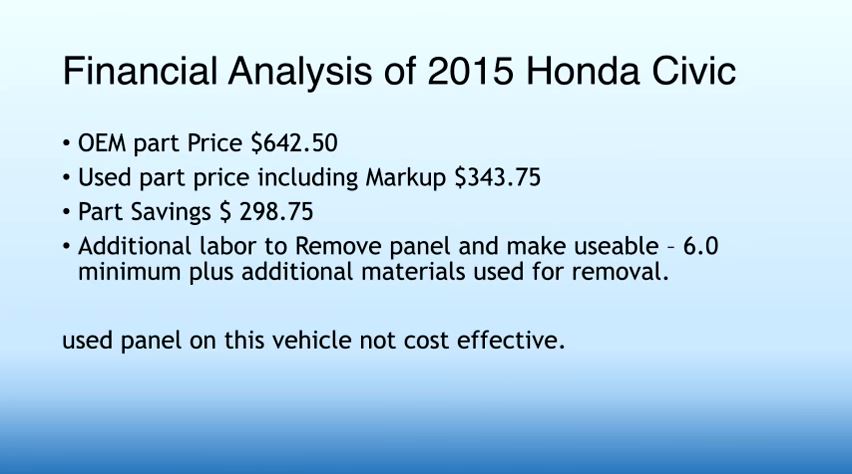 National Auto Body Research surveys of 4,650 shops estimates the average posted labor rate was $57. At that point, six hours of additional work bumped up the price of the used quarter to $685.75, costing the insurer or customer an extra $43.25 than going new would have cost.

Collision Advice and CRASH Network’s “Who Pays for What?” 2017 body survey put the median body labor labor rate at $54; six hours at that rate adds $324 to the used quarter panel and also puts it over the cost of a new one.

Even if an insurer offered to throw the shop an extra two hours of labor, the repairer ends up giving away 4-8 hours of work for free to properly prepare the part in a fashion that might have a prayer of being appropriate, according to Olson.

“I think estimators sometimes forget how much they’re giving away,” Felder said. A piece-rate tech ends up losing a lot of money if they do the work right, she said.

Montanez suggested a shop could even attempt the experiment done by Honda and Collision Hub to prove the point. Film a top technician painstakingly disassembling and preparing the used quarter panel, or have a DRP insurer sitting in the shop writing estimates and watching the technician perform that exercise.

“Do your own time study,” he said.

As noted earlier, such a “Fairyland” scenario might already by impossible under the science and logic of OEM repair procedures anyway.

But even if installing a used quarter panel somehow didn’t violate OEM instructions and wasn’t an inefficient money-waster of an option, the shop still can’t shake that it’s working without a net. There’s no OEM repair procedures covering the removal or use of the recycled part — which means, just as it did when the Seebachans replaced Honda with John Eagle Collision as a defendant, the shop’s left holding the bag should something go south with the vehicle.

“It’s your liability,” Montanez warned prior to the discussion.

A March 2018 “Repair University Live” broadcast presented considerations that would make installing a used quarter panel not cost-effective compared to a new one. (Screenshot from Collision Hub video)

The Database Enhancement Gateway provided Collision Hub’s “Repair University Live” with a list of not-included operations which could arise during the preparation of a used quarter panel. (Screenshot from Collision Hub video)

A March 2018 “Repair University Live” broadcast walked shops through the scientific and financial reasons — to say nothing of the liability risks — why a used quarter panel won’t fly. (Screenshot from Collision Hub video)