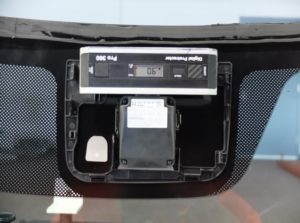 Insurance Institute for Highway Safety testing of windshield-mounted advanced driver assistance systems last year found that a misaligned Honda Civic camera led to issues with the vehicle’s autobraking and lane-departure warning systems — which an IIHS researcher said made calibration even more important as a means of compensating.

The IIHS had been testing a variety of manufacturers’ windshields and autobraking after OEM position statements warned of the consequences of variables such as using aftermarket glass, IIHS senior test coordinator Sean O’Malley said.

“The engineering part of us said, ‘Is that really true?'” O’Malley said.

Honda uses a camera behind the windshield for more than one ADAS system on the vehicle, and collision and glass shops are going to be calibrating it under many conditions as well, Honda collision assistant manager Scott Kaboos said on a December 2017 Guild 21 call. (See slides.)

Kaboos told the audience that Honda required OEM windshields be used and it’s seen “many issues” where aftermarket glass led to a situation where the calibration wouldn’t “take properly.”

After the shop replaced the windshield with an OEM edition, “everything worked fine again.”

Like the radar, the camera also should have a wheel alignment done or verified before it’s aimed, according to Kaboos.

O’Malley said the IIHS team generally didn’t notice any autobraking issues with camera performance between aftermarket and OEM glass or whether the camera had been calibrated or not.

But on a “fluke,” one of the IIHS staffers was driving a 2016 Civic used in the testing and “noticed the lane-departure was way off.” It turned out that the aftermarket windshield the IIHS purchased had a misaligned camera mount.

However, O’Malley said this demonstrated the need for calibration rather than a ban on aftermarket parts, arguing this could compensate for a misalignment at the factory or shop level by teaching the camera to look in the right spot anyway.

“The bottom line is that it could still be calibrated to work as intended,” he wrote in an email.

The Honda Sensing suite on the Civic includes automatic lane-keeping, and the camera’s misalignment led to the car juking itself for incorrectly perceived lane lines, O’Malley said.

A camera intentionally misaligned 0.4 degrees to the left led to the camera misperceiving the distance to the lane line by 6 inches on one side and 15 inches on the other during a lane-departure warning test. O’Malley said the camera’s housing also seemed less snug. He was even able to steer the car by reaching up and adjusting the camera, which was “kind of scary” and something he cautioned was a “Closed road. Do not drive on public roads” kind of activity — i.e., don’t try this at home.

“However, when I … attached the camera to two other aftermarket windshields we had, they weren’t as loose,” he wrote in an email. “Could have been a rough install? Could this occur on an OEM glass? Who knows? I guess that’s why calibration is required.”

The IIHS also tested the autobraking of a baseline Civic travelling 25 mph. The collision warning sounded at 124 feet, or 3.4 seconds, before the impact, and the car began braking itself at 53 feet, or 1.5 seconds out.

The camera aimed to the left by 0.4 degrees led to the forward collision warning occurring 120 feet before the impact, giving the driver 3.3 seconds to react. The car braked at 1.5 seconds out, at the same 53-foot mark as before.

However, the camera aimed 0.6 degrees to the right didn’t warn the driver until 102 feet out — only 2.8 seconds to respond. The car didn’t try to brake itself until 32 feet away from the collision. That 0.9 seconds of braking led to the Civic hitting the obstacle at 20 mph.

The camera which was seemingly correct but misaligned at the bracket didn’t sound the warning until 110 feet, giving the driver 3 seconds to react. The autobraking didn’t kick in until 46 feet and 1.3 seconds from the obstacle, leading to an impact at 5 mph. But calibration could have compensated for these issues, according to O’Malley.

“It also calibrated off to the left,” he wrote. “When we took it in for calibration, initially, it was to the right, and the dealer said they couldn’t do it. Later, I realized why (they didn’t follow procedures), but we never took it back in. I’m sure it would, though. The center of the car needs to be determined, and projected out in front of it, and then the camera told where that is. This was the step the dealer failed to do, until I helped them.”

The service center had skipped a couple of steps in the static calibration process related to parking a car on a level surface and properly measuring distances related to targets.

“They were just eyeballing it,” O’Malley said.

The dealership had thought it couldn’t calibrate aftermarket windows, when in fact its failure to follow the OEM procedures was to blame, he said. (The IIHS also found another dealership which had to refer it to another facility 70 miles away for a calibration.)

While the factory-misaligned bracket was found on an aftermarket windshield, the IIHS found no real issues with aftermarket glass itself, according to O’Malley. Chemical composition, laser refraction and refractive index testing found largely that “glass is glass,” something windshield manufacturers had said would be the case, according to O’Malley.