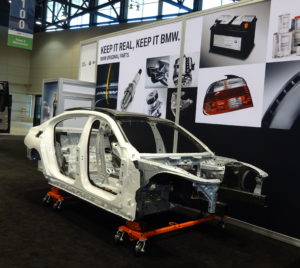 Following a “soft opening” announcement at the recent BMW National Aftersales Conference, BMW on Friday shared a few details about its thought process for the upcoming expansion of its certified collision program.

BMW said Friday it will allow its more than 300 dealerships to sponsor up to two independent collision repair facilities to participate in the program, though it noted that more than half of these already run a BMW Certified Collision Center. In the past, the OEM limited the network solely to shops at least 51 percent owned by a dealership, though it had allowed sponsored independent collision repairers to participate in the same training.

“Currently more than half of BMW dealerships own and operate a BMW Certified Collision Repair Center, meaning they meet rigorous BMW standards for training, parts, equipment, and repair procedures,” BMW said in a statement. “With an ever-growing number of BMW vehicles on the road, there has never been a better time to grow. By empowering BMW dealerships to choose to sponsor up to two Independent Repair Facilities in their Primary Market area, more dealers across the country will be able to offer clients even greater access to BMW Certified Collision Repair Centers and the uncompromising quality, first-class service, and peace of mind that this certification ensures.”

BMW is still developing the program and had few other concrete details it could share Friday, insurance manager Joshua Fahlbush wrote in an email Friday. He did mention a couple of ideas BMW is discussing, stressing that none of these are a given to make the final program:

Asked if BMW would take steps to prevent dealerships from demanding an additional payment from the shops in exchange for sponsorship, Fahlbush said Friday that “we’ll have recommendations that we’ll make to the dealers” but he couldn’t comment further at this time.

The issue of pay-to-play certification sponsorships recently arose in New York during a dispute between a Mercedes-certified body shop and a Mercedes dealership. After the shop dropped its lawsuit alleging such a demand, the dealership issued a news release in which its parts and service manager called such payments “an extremely common practice for body shop repairs and also completely legal.”