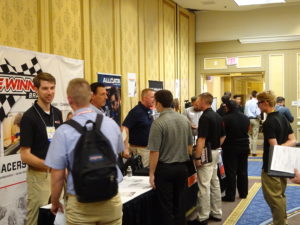 6.55 million jobs were available in March, nearly one for every one of the 6.585 million unemployed people in the country that month, based on seasonally adjusted federal data.

Longtime Associated Press economics writer Christopher Rugaber, who pointed out the impressive statistical confluence in a Tuesday article, called it a “historical anomaly.”

“Typically, there are far more unemployed people than advertised job openings — often twice as many,” he continued. “And back in July 2009, just after the Great Recession, there were 6.7 unemployed people, on average, for each open job. With that ratio now at essentially 1 to 1, the job market appears to be tilting in favor of workers and job-seekers rather than employers.”

Depending on how many positions employers added in April, the number of jobs could potentially overtake the number of unemployed. The job openings report isn’t out yet, but the number of jobless Americans fell to 6.346 million to produce an unemployment rate of 3.9 percent.

That’s the lowest unemployment rate since 2000, according to the Department of Labor.

“America’s job creators are confident. Since President Trump’s election, nearly 3.2 million American jobs have been created. That includes nearly 800,000 jobs added since the President signed the Tax Cuts and Jobs Act into law.

“In April, the rise in average weekly earnings amounts to an annual increase of approximately $1,300 – a real boost for American families. These increases do not include the millions of bonuses received by American workers since the President’s tax cuts.  Although there was an increase in wages, we would like to see more wage growth. Rugaber’s Associated Press report examined the idea that slower wage growth led to employees just posting more jobs because they didn’t have to pay employees much more. However, the AP quoted one economist who argued that the buyer’s market favoring job seekers meant companies will have to start raising pay.

Such high employment might make it more difficult for collision repairers to attract talented staff without offering more pay. Consider this and these other federal statistics while evaluating your pitch to prospective employees.

The Bureau of Labor Statistics projects the number of auto body repairer positions in the country will increase 8.5 percent from 160,400 jobs to 174,100 between 2016 and 2016 — a higher rate than the 7.4 percent growth in employment nationwide over that decade.

The government’s growth projections are interesting given the trend toward industry consolidation, predictions that smaller shops will be unable to keep pace with modern vehicle, and what is eventually likely to be a reduction in crashes tied to advanced driver assistance systems, if not outright autonomous vehicles.

According to the feds, auto body repairers made an average of $21.94 an hour in May 2017 for an average annual income of $45,630. It might be more useful in terms of calculating what to offer potential candidates (or to your staff to keep them happy) to consider percentiles.

At the median 50th percentile — meaning that half of all the repairers in the country are making more — a body technician makes $20.18 an hour for an annual wage of $41,970.

It’s unclear what the existence of piece rate pay plans would mean for these rates, but you get the idea.

Ironically given the tech shortage, labor rates increased very little since May 2016. The median pay rose about 1.05 percent, while average pay rose 1.01 percent. Inflation was 1.9 percent during those months.

While benefits and various non-compensation workplace conditions matter a great deal as well, it looks like shop owners might want to evaluate their pay scales if they’re having difficulty finding qualified techs — particularly if the national employment rate remains strong.

“US job openings equal unemployed for 1st time in 2 decades”

May 2017 Occupational Employment and Wages data for auto body repairers

May 2017 Occupational Employment and Wages data for transportation painters