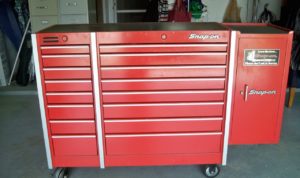 A former collision repairer’s recent generosity to a Florida vo-tech school is the kind of assistance educators need from the industry, according to the Collision Repair Education Foundation.

The tools retiree Joe Lane donated to Lake Technical College are a rare treat for a vo-tech school — but a highly needed one, CREF development director Brandon Eckenrode said in April.

Lane said he’d kept the toolbox around unused for a while but ultimately concluded the toolbox was “too damn big.”

“We kind of needed to get rid of it for the room,” he said.

He said he tried to sell the set on Craigslist, but that marketplace is saturated with tools and he never found any takers. His wife, Donna, suggested donating it to a local tech school, and Lane said he figured “somebody starting out could use it.”

Lane contacted the Society of Collision Repair Specialists, which worked with the Collision Repair Education Foundation to find a home for the tools. CREF matched Lane with Lake Tech, which Lane recalled from his time working as an insurance adjuster in Florida.

“I’ll probably stop by there one day,” Lane said. Lane said he bought the toolbox around 1984 and remembered how expensive assembling a professional automotive tool collection had been. Altogether, the set and box were probably worth a few thousand dollars, though he noted he’d taken advantage of the vendor’s ability to trade up.

“Snap-On stuff is not cheap,” Lane said. “… Anything to do with the auto body business is not cheap.”

Lane started out as a helper, “learned as I went along,” and spent 1976-88 in the auto body repair industry, ending as manager of Long Island, N.Y.-based Giles Chevrolet’s auto body operation, a “pretty good little shop.”

He followed that with more than two decades as an insurance adjuster for MetLife and Atlanta Casualty/Infinity Insurance, and about a year after that as a desk reviewer.

“That was pretty interesting,” he said. For repairers with tools sitting unused, Lane called donating the equipment “a good way to help somebody.” On the recipient side, he encouraged auto body repair students to “pay attention” and take notes.

“It’s a pretty good way to make a living,” he said. He said sheet metal and plastic parts to practice upon are the No. 1 request by schools.

“We kind of target those,” he said.

Fenders, bumper covers, door skins and hoods are in demand, and used parts or components headed for the trash heap are fine for the schools’ purposes, according to Eckenrode. (At least one expert has even advised professional technicians practice techniques like welding on such scrap; after all, you shouldn’t be using an actual customer’s car for practice or welder calibration.)

“Some of these instructors are dumpster diving,” Eckenrode told the Collision Industry Conference earlier in April.

CREF can be a good middleman for shops and individual repairers looking to make such donations. As a nonprofit 501(c)3, it has the ability to send the donor a letter documenting the gift for tax-deduction purposes, Eckenrode said, though he said many donors tell CREF such self-interest wasn’t the reason for the gift. (CREF received more than $11 million in donations in 2017, putting 90 percent of it back into schools and rating a top four-star rating from Charity Navigator.) “These schools will take pretty much anything,” Eckenrode said.

Omaha, Neb.-based B Street Collision Center recently donated one of its Pro Spot welders to Northeast Community College and plans to do more, B Street human resources and marketing manager Katie McGrath recently wrote to SCRS. Like CREF, her organization identified a local need for support from shops.

“With this donation we spent an entire day with the kids teaching them how to use it and giving each one of them time to test it out on their current projects,” McGrath wrote. “This year our organization has made it a point to partner with many of the local high schools and tech colleges around the area to dig into their curriculum and see where we can help.  What I have found while visiting the different programs is that there is students interested in the trade fields but lack of funding, equipment and sometime even support.  That is where we plan to come in.  B Street feels it is important to ensure the future technicians coming out of trade schools are prepared and trained on the latest technology, to ensure a smooth transition from education into their careers as collision repair professionals.  And we are fortunate enough to be able to help with that.  It’s not a secret that there is a high demand for well-trained individuals.”

Eckenrode said that nine out of 10 times, a school is able to collect the donation itself if the donor and school are within a reasonable proximity to one another. However, he suggested the donor bring the items over themselves to see the program and conduct a “little bit of marketing.” It certainly might be a good way to attract technicians-in-training to apply for open positions at the donor shop.

A shop replacing equipment might also consider sending the old gear over to the school so students can practice, Eckenrode said. While schools don’t want to be a “dumping ground of garbage,” sometimes slightly outdated equipment is “better than nothing,” he said.

Shops also can donate uniforms or follow Rust-Oleum’s lead and help upgrade what can be seriously deficient facilities, Eckenrode told the CIC.

Many vo-tech schools haven’t been touched since the 1960s-80s, he said.  “They honestly look like dungeons,” he said.

Rust-Oleum adopts a school every month and lays down a brand-new epoxy floor for the shop program, according to Eckenrode. Sometimes the students help install it themselves, which he said instills “pride.”

But the demand is greater than what Rust-Oleum’s effort covers, and CREF is trying to organize clean-ups while school’s out this summer. Contact Eckenrode if you’re interested.