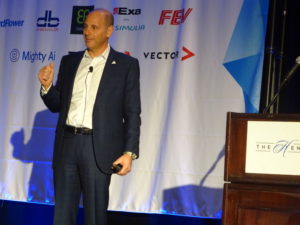 Axalta declared the world’s most popular car color in 2017 to be white: a highly reflective color easy to detect by an autonomous vehicle’s critical LiDAR systems.

The second most popular color was black — which might as well be invisible to the self-driving car.

What we think of is an object’s color is really the combination of the frequencies of light waves which bounce off it and reach our eyes. True white is 100 percent reflective, meaning the entire visible color spectrum bounces back at us. True black is 0 percent reflective, meaning all the light is absorbed by the object. LiDAR, a crucial technology used by self-driving cars, also views the world using reflectivity, bouncing laser light off of objects to “see” them. It’s like radar or sonar, but with light waves.

Coating a car with automotive black paint’s “less than 2, less than 1” percent reflectivity is effectively “blinding a sensor” and preventing a self-driving car from seeing it 200 meters away, Axalta Chief Technology Officer Barry Snyder told Automotive World’s Megatrends USA conference earlier this year. 200 meters is felt to be the minimum “sight” distance for LiDAR to achieve safe autonomy at highway speeds.

While other means of detecting objects exist, this blindness is a major problem, and it could be for the aftermarket as well.

You could only have white cars, and you “might” be able to have yellow ones as well, according to Snyder. 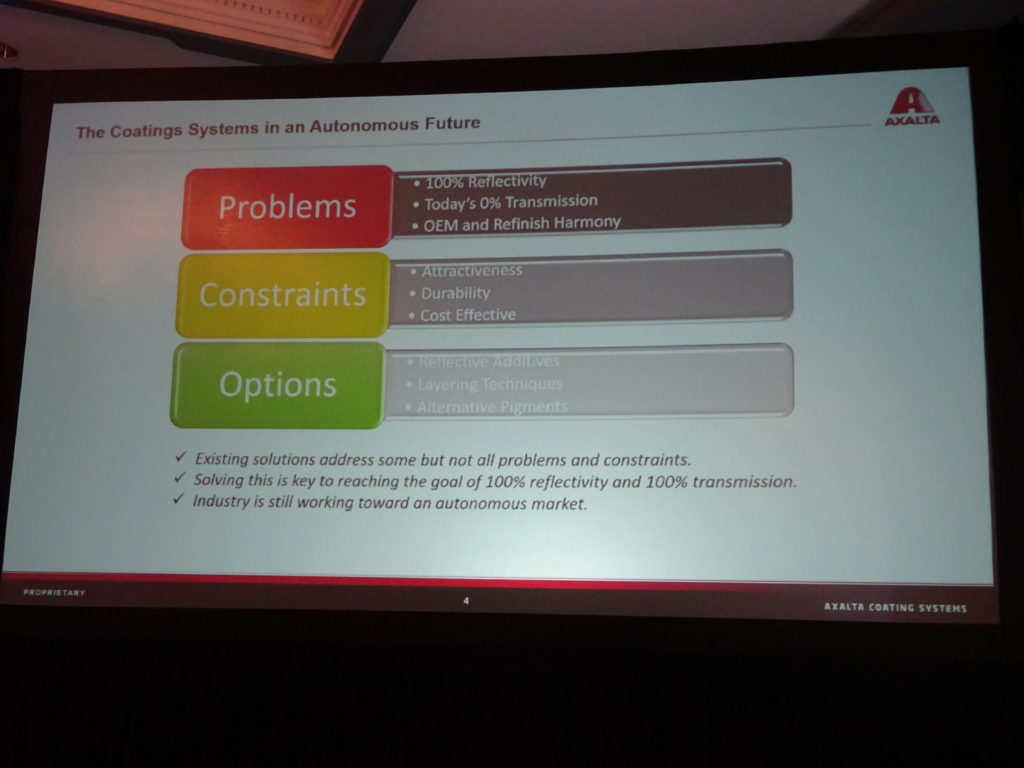 Asked by an audience if Axalta could add reflectivity outside of the visible spectrum to black so the car would still be visually attractive, Snyder said, “The last point is really the trick. It’s ‘and make them look pretty.'”

Carbon black pigment is what makes the color black pleasing to the eye, according to Snyder.

Unfortunately, it’s “highly absorbant” in not just the visible band but also the infrared spectrum. Delivering a black on the edge of red “starts to turn pretty muddy,” he said.

“Any color that’s not white has carbon black in it,” Snyder told us later.

It’s possible to achieve a black vehicle closer to the desired look through a layering system or other pigments, but these raise cost issues, according to Snyder. Some pigment alternatives are 10 to 100 times the cost of the existing materials, he said.

No standards currently exist for reflectivity or transmissivity of paint for use in autonomous vehicles, and unless the industry developed such guidance, “we’re going to struggle,” he said.

At 10 percent reflectivity, Axalta can achieve “more realistic kinds of solutions,” according to Synder, “but the technology isn’t there yet.”

Axalta in January announced the 2018 Automotive Color of the Year would be “StarLite,” a pearlescent white.

“Highly reflective colors can contribute to the functionality of driverless vehicles because lighter colors, like StarLite, are more easily detectable by LIDAR (Light Detection and Ranging) systems,” Axalta global color marketing manager Nancy Lockhart said in a statement. “So, while StarLite may not apply to all autonomous detection systems, Axalta believes these shades will become increasingly important to automakers.” 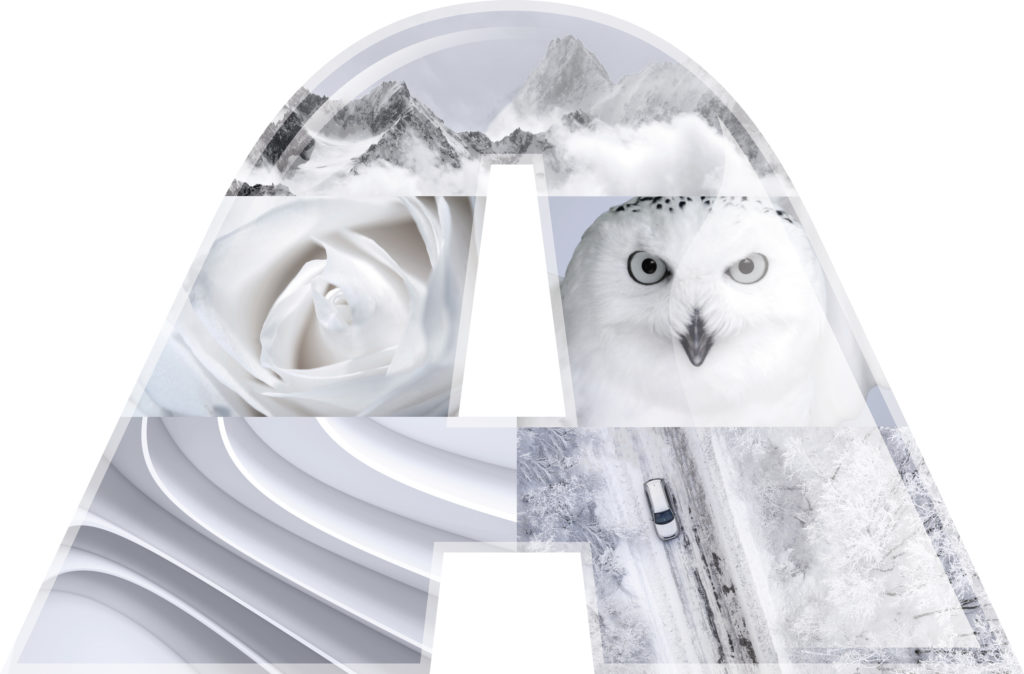 As alluded to above, Snyder said another major issue for autonomous vehicles surrounds transmissivity, which involves the ability of light to get through the coating.

Other vehicle sensory systems are found behind a painted surface, such as a bumper fascia. However, Axalta’s coatings absorb 100 percent of the light in the infrared spectrum, he said.

Shooting a laser through such paint could be a challenge, as could receiving the light reflected off of the object the car’s supposed to see, according to Snyder.

Customers and OEMs care about automotive style, color and design, and locating a LiDAR sensor behind a clear window could affect the aesthetics, Snyder said. Another problem would be keeping that window clean and free of rock chips, he said.

Snyder said Axalta had technology in place to handle the issues of reflectivity and transmissivity to some degree, but it was “not fully ready for prime time.” He also said earlier that Axalta can provide OEMs with options that are potentially attractive or potentially durable, but not cost-effective.

Asked about antireflective coatings, Snyder said Axalta had matte coatings. He said it was looking at shifting the amount of absorption as well as what light was absorbed. Asked if Axalta was looking at the problem from a filtration perspective rather than a sensory enhancement perspective, Snyder said that was the case today but the opportunity might lie in the latter.

Snyder also pointed out that the U.S. car parc is 263 million vehicles. Axalta data suggests more than 60 percent of them might not be 100 percent reflective. Given the lifespan of vehicles today, any solution enacted on the industry will still take 15-20 years to be present on all the vehicles on the road, he said. 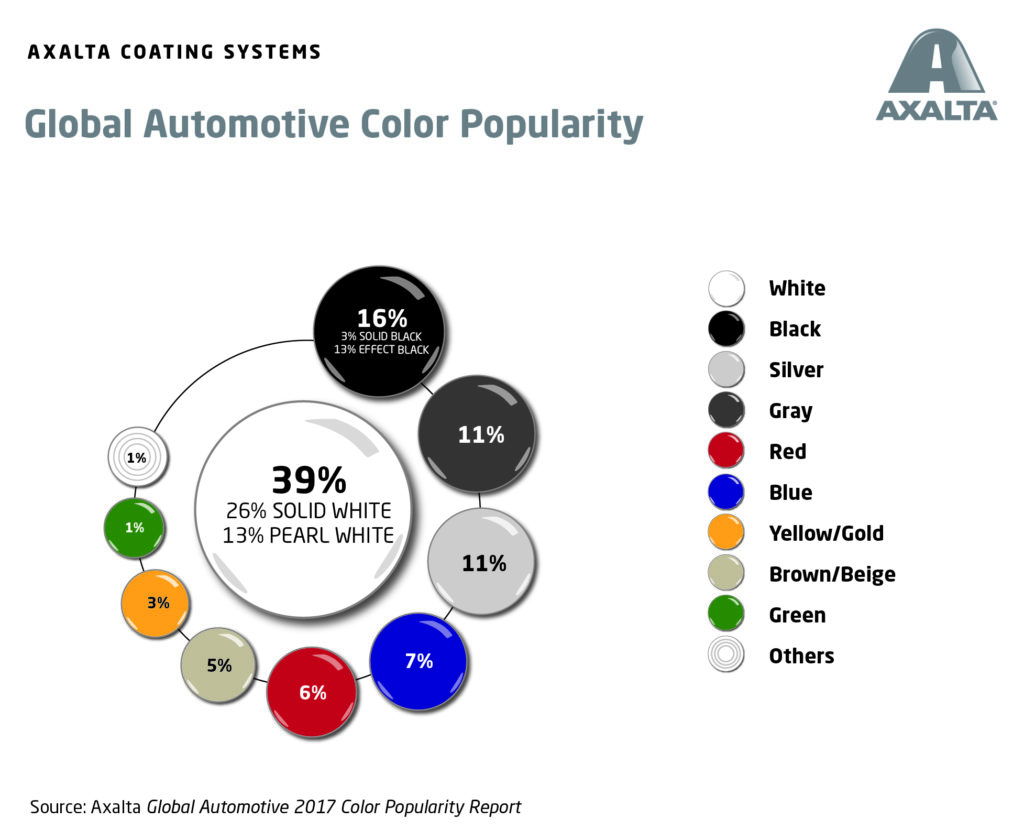 Whatever solution Axalta and its paint rivals, the tech companies and the OEMs determine will work must either be applicable in the aftermarket or have an alternative for that space.

“That hasn’t been part of the conversation,” said Synder, who called the aftermarket “critically important.”

Cars live in the “real world,” and they’ve got to be able to come out of a repair shop with the same functionality as after the factory, he said.

This raises additional questions for auto body and paint shops besides the ability of paint manufacturers to replicate their OEM-level solutions in the aftermarket.

For example, will a new federal FMVSS standard be required to ensure a budget-brand automotive coating or even a rattle-can option is still 10 percent reflective at 200 meters? Does this become a situation where a repairer or paint shop is taking on additional liability by using a coating not recommended within OEM procedures, just as a repairer working on General Motors vehicles generally shouldn’t use anything but the impact-resistant structural adhesives vetted by that automaker?

Axalta declared “StarLite” to be the 2018 Automotive Color of the Year. (Provided by Axalta)

Axalta declared the world’s most popular car color in 2017 to be white: a highly reflective coating easy to detect by an autonomous vehicle’s critical LiDAR systems. (Provided by Axalta)