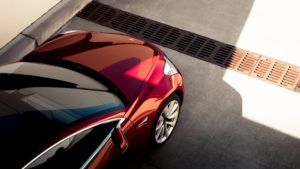 The body shops can only handle “light collision work,” according to the company’s body shop support webpage.

“Appointments are subject to availability and currently exclude major repairs,” the site states. “If a Tesla Body Shop is unavailable to repair your vehicle, you will be directed to a 3rd party Body Shop in the Tesla Approved Body Shop Network.”

The topic of company-owned doesn’t appear to have come up in Tesla’s second-quarter earnings call on Wednesday, according to a transcript from Seeking Alpha.

However, Tesla did reiterate that it saw body shops as a source of revenue in its quarterly letter to shareholders.

“We are expecting that the negative margin of our Services and Other business will narrow by the end of this year,” Musk and Chief Financial Officer Deepak Ahjua wrote in the letter Wednesday. “As we generate more revenue from used car sales, merchandise & accessory sales, body shop and other paid repairs, we expect revenue to grow significantly. Used car sales in particular are growing rapidly and are becoming more profitable. Structurally, as our vehicles come off lease and as our fleet gradually ages, used car sales will become a significant portion of our Services and Other business. A vast majority of our customers coming off lease are either obtaining a new Tesla or keeping their existing car, which is well above industry best-in-class.”

Musk also told a Model 3 owner Tuesday on Twitter that “Tesla body shops are ramping up fast” and the goal was “same day body repair.”

Twitter user Adam Whiting had tweeted that his Model 3 had been hit June 11.

“My car has been in the shop for 50 days and I was just told the parts won’t be ready until September 6th,” @aswhiting wrote on Tuesday to Musk. “Any chance you can escalate this?”

Other Twitter users complained about parts on the thread, and Whiting also noted, “One other Model 3 at body shop has been waiting on a quarter panel for over 100 days. That’s the main part I’m waiting for. I got escalation to July 27th then was told September 6th when parts didn’t arrive.” He also wrote Tesla would pay for his Enterprise rental as long as it took for the repair.

User Marc Goldschmidt, who said he was the other owner, demanded parts as well.

“Elon, I’m the owner of that other Model 3 that’s been in the Chandler Service Service King body shop since 4/16/2018 and I expect to be serviced along with Adam,” @MarcGoldschmid1 wrote. “Please have the parts sent over for both cars. BTW, I’m also a Model X owner.”

Elon, I’m the owner of that other Model 3 that’s been in the Chandler Service Service King body shop since 4/16/2018 and I expect to be serviced along with Adam. Please have the parts sent over for both cars. BTW, I’m also a Model X owner.

Tesla touched upon production parts supply briefly during the call, based on the audio and the Seeking Alpha transcript. Musk described situations where a production part was unworkable because it was designed or built wrong or had some other issue. The company therefore had to resort to “low-volume tooling,” which can cost 10 times more than production tooling, he said.

Parts supply is not mentioned in the letter to shareholders, though that document does note that Tesla was able to produce higher volumes of cars than it had been in the past — good news for Tesla-certified shops and perhaps for parts backlogs.

“During the month of July, we have repeated weekly production of approximately 5,000 Model 3 cars multiple times while also producing 2,000 Model S and X per week,” Musk and Ahjua wrote. “Having achieved our 5,000 per week milestone, we will now continue to increase that further, with our aim being to produce 6,000 Model 3 vehicles per week by late August. We then expect to increase production over the next few quarters beyond 6,000 per week, while keeping additional capex limited. We believe that increasing capacity by improving utilization of our existing lines and making selective improvements to address bottlenecks rather than creating entirely new duplicated lines will be the most capital efficient approach.”

Tesla “Services and Other” revenue was more than $270.1 million in the quarter, up from nearly $216.2 million the previous year. The company attributed this to “higher used car sales.” Tesla’s “Services and Other” expenses were nearly $386.4 million, up from nearly $271.2 million. Musk and Ajua wrote that the the gross loss was in line with expectations and a decrease from the first quarter.

Featured image: A Tesla Model 3 is shown. (Provided by Tesla)