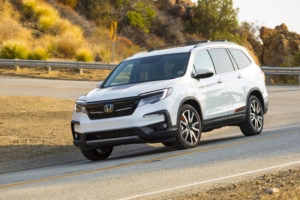 Honda on Tuesday announced it would make its Honda Sensing suite of advanced driver assistance system technologies standard on all 2019 Pilots as part of a refresh of the SUV.

The 2019 Pilot will carry autobraking, adaptive cruise control and automatic lane-keeping and road-keeping on all trims. Previously, the technology was optional on the EX and EX-L models and standard on the Touring and Elite editions. It wasn’t even possible to buy it on the 2018 Pilot LX, the base trim.

Honda also will expand the blind-spot monitor — which before was only in existence on the Elite — to be standard on the EX, EX-L and Touring trims, and the rear cross-traffic alert will go from standard on the Touring and Elite to standard on all but the base LX trim. The side-view mirrors on the Elite will be power folding variants which can automatically dim.

Fog lights will also be switched to LEDs across the board and be available as an option on the LX.

Finally, a hands-free tailgate option now exists on the Touring and Elite trims.

Honda changed other common collision parts on both the front and rear ends of the car.

“The new front bumper incorporates larger fog light housings, fully integrated into the bumper, giving the 2019 Pilot a more aggressive look,” the OEM wrote. “A redesigned grille features a bold interpretation of the Honda ‘flying wing’ grille design, with its chrome band extending above the headlights. Further emphasizing the off-road aggressiveness is a new ‘skid’ garnish on the lower portion of the front bumper.”

The OEM also said the front turn signals are thinner. 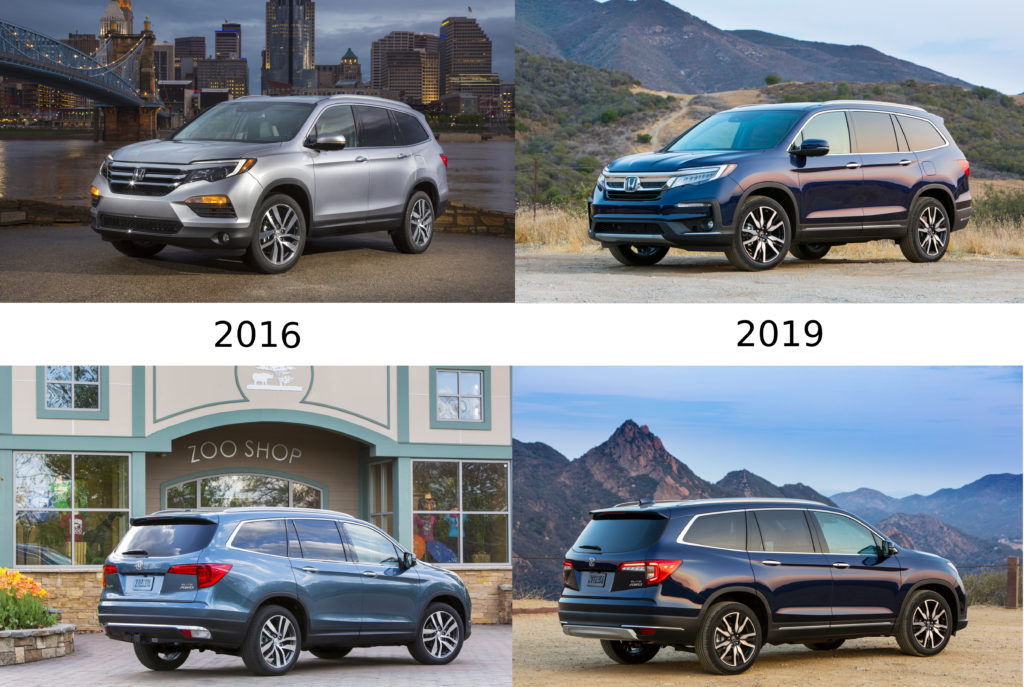 Honda also revamped the taillights and bumper and added chrome on the rear of the vehicle.

“The rear receives new taillights …” Honda wrote. “A chrome strip on the rocker extends along the side of the vehicle, wrapping around the rear bumper and highlighting the lower bumper’s skid-type design.”

Some of these changes might introduce additional parts cost, and the guaranteed ADAS systems introduce new repair considerations on all the trims.

Among them: Honda warns against aftermarket grilles and glass on vehicles with Honda Sensing, and calibrations are going to be necessary after commonplace collision repair scenarios, according to a Honda position statement and a December 2017 VeriFacts Guild 21 call by Honda collision assistant manager Scott Kaboos.

For example, the millimeter-wave radar used in Honda Sensing autobraking needed to be recalibrated under a variety of common scenarios, Kaboos said then. These include any time the radar is R&I’d or R&R’d, after any crash damage to the front of a vehicle and after any structural damage anywhere, according to Kaboos.

The blind-spot monitoring radar will have to be recalibrated any time you R&R or R&I it or remove or repair the panel holding it — often the quarter panel, according to Kaboos.

Wheel alignments are often necessary for recalibration as well, he said.

However, the now across-the-board nature of these ADAS systems make it less likely that Pilots will get into collisions at all.

The Insurance Institute for Highway Safety Highway Loss Data Institute has studied more than 327,000 2016 Accords, Civics and Pilots with and without Honda Sensing. The insurer-backed research center found collision claim severity fell $379, the Hondas saw nearly 11 percent fewer third-party claims to other cars or property, and injuries to other people fell 28 percent, according to Honda.

The Honda Pilot design generation started with the 2016 version of the SUV and is notable for being more than 50 percent advanced-high-strength (590 MPa) or tougher steel, reaching as strong as 1,500-megapascal steel in its “door ring.” The front bumper beam and hood are aluminum.