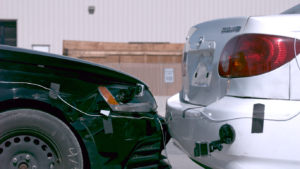 Metromile announced the low-speed research in late June. It conducted the experiment with an eye toward fighting fraud, but the concept is an intriguing idea for researching collision claims as well. For example, which internal parts are affected by a seemingly minor crash? What measurements change? What technology, such as an occupant classification sensor, is affected?

An Insurance Information Institute piece cited by Metromile reports that the insurance industry estimates about 10 percent of its losses and loss expenses are wasted on fraud. That statistic would translate to $34 billion lost to property and casualty fraud in 2015, the III wrote.

While a great deal of crash test data exists at speeds like 30 and 40 mph, “there isn’t a lot of sources of information out there for … these slow-speed events,” Clifford said. So Metromile repeatedly ran various low-speed crash tests under controlled conditions to determine if the company would receive similar data from the vehicle each time, he said.

The testing leveraged the telematics within Metromile’s Pulse OBD-II plug-in, which includes a GPS and accelerometer, according to Clifford.

Metromile’s customers attach the device to their vehicles, allowing the insurer to track how many miles policyholders drive and bill them accordingly. (The idea is that an infrequent commuter is less likely to get into a crash than a road warrior, and shouldn’t be lumped in with them under a less precise traditional actuarial model.)

The Pulse also can send crash data to Metromile’s artificial intelligence “AVA,” which the company currently uses to flag possible fraud worth extra investigation, according to Clifford.

“AVA can also use opt-in sensor data from the Metromile Pulse device to reconstruct the accident scene, expediting the approval process,” Metromile wrote in 2017. “For certain claim types, this enables the claim to be instantly approved.”

Clifford said Metromile didn’t use the vehicle’s sensor information or access the electronic data recorder for its crash tests, though the Pulse can read and notify Metromile’s policyholders about diagnostic trouble codes.

Metromile conducted the crash tests using a 2003 Toyota Corolla, 2012 BMW 328i, and an unspecified Volkswagen Jetta and Chevrolet Aveo which Clifford said had been written off but were still driveable.

Clifford said the insurer tested rear-end hits at 2.5 mph, 5 mph and 10 mph; rear offset crashes in which the two cars were shifted around 2 feet to the left or right; sideswipes at particular angles; front collisions at different speeds; and a frontal crash into a highway water barrier. It also tested hard-braking scenarios at 10 mph, 20 mph and 30 mph to see what telematics data would appear.

He said Metromile installed its OBD-II Pulse dongles on both the victim and at-fault vehicles for “a look from both sides.” The research yielded successful data. Metromile found it could detect that a vehicle had been bumped into by another, according to Clifford. It also confirmed it could detect a low-speed sideswipe, tell its “fingerprint” apart from a different type of crash, and determine the “angle of attack,” he said.

“With machine learning technology, our team will be able to better prevent insurance fraud and assist customers with hard-to-prove but common claim types, like hit-and-run collisions, car theft, and rear-ends,” Metromile data scientist Paul Anzel said in a statement in June.

Asked if the team examined the vehicle to see what a low-speed property claim would entail, Clifford said no. “I wish we had you there suggesting that to us,” he said.

However, Clifford said he spoke to Metromile claims staff in anticipation of our interview. They confirmed that damage might exist beneath the vehicle’s exterior, and “it really might not be apparent to you the driver,” he said.

Asked if Metromile was working on predictive analytics outside of fraud, Clifford said that understanding claim severity would be “really important in the future.” He declined to say more except, “Watch this space.”

He also said an interesting predictive analytics challenge would be photo estimating (which Metromile already does, but apparently with humans instead). Asked why Metromile wouldn’t just skip that and derive estimates based upon presumably more accurate telematics (after all, the latter tech is Metromile’s bread and butter), Clifford said having a photograph with telematics would be better.

With more information, “you’re going to get a better estimate, I think,” he said. Metromile shared tidbits from its claims data in this graphic released in late June 2018. (Provided by Metromile)