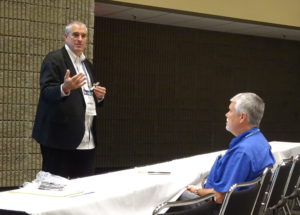 Arguing that “Culture and process is Quality,” Vehicle Collision Experts CEO Mark Olsen this month described managing both employees and the QC process to avoid comebacks or lawsuits.

An important step in quality control is simply giving the repair information to a technician, be it a sublet vendor or one of your own team, according to Olson. He gave the example of disconnecting a battery on a Volkswagen.

VW repair procedures can demand a shop first disconnect the positive, then the negative — while the ignition is on, Olson said. Failure to disconnect in the counterintuitive way Volkswagen wants can cause voltage spikes, he said.

“Wouldn’t you want a tech to know that?” he asked the audience at an Aug. 10 NACE educational session.

After giving the information to the tech and declaring them responsible for executing all of it, Olson suggested having the tech sign it.

An owner has liability for the life of the vehicle, not just the life of your shop’s  warranty to the current owner, Olson said, noting the John Eagle case. (The jury found a shop’s failure to follow OEM repair procedures while completing work for a previous owner intensified the subsequent owners’ ordeal in a crash.)

The owner’s “liability is forever,” Olson said. Are any technicians going to be with you that long, he asked the audience. Do your techs have any “skin in the game on your liability?” he asked.

To this point, he warned technicians about the “‘Just give me a key'” tech that wants to come in early. (The guy who stays later is also someone to fear, he agreed with a member of the audience.)

That tech will put “four walls and a rear body panel” and seam sealer on the vehicle and send it to the paint department without the shop knowing, Olson said.

He said investigations have revealed that problems on a vehicle can be traced to this come-in-early or weekend staffer.

Learn more about culture and repair process best practices during the SEMA Show at ““Visually Managed Collision Repair” with Lee Rush of Sherwin-Williams, “You Schedule How?” with Charlie Whitaker of AkzoNobel and “Why you should embrace Post repair inspections” with David Smith of Auto Damage Experts. The sessions are part of the Society of Collision Repair Specialists Repairer Driven Education Series Oct. 29-Nov. 2. Register here for individual RDE classes or the series pass package deal.

Technicians might resist the notion of signing that they are responsible for the work, but “is your livelihood” worth avoiding that conversation with them, he said. (An audience member also suggested that a belligerent technician could be skipped — instead, make his or her manager the one who has to sign.)

Olson noted that some shops will require a technician to produce a $50,000 bond for their work (the cost to the tech might be $1,500, Olson said). He said this can be seen in California given the existence of Bureau of Automotive Repair oversight.

Olson also proposed a shop also institute a quality control process, noting it can even be a sales tool. (You impress the customer by showing them a form showing how the shop has signed off on a variety of quality checks.)

He recommended shops keep the checklist simple and said he liked the peer review of having another body technician examine the first tech’s work and sign off upon it.

“It’s a culture shift,” Olson said. He said he could talk to a tech resisting the idea and have them doing it “happily” because they’ll make more money.

Olson’s presentation recommended shops do this by stage or grouping and requiring all blanks filled in with a signature, check mark or a not-applicable designation like “n/a.” “Keep it simple,” he said — don’t do “500 blanks.” The inspections should occur during the repair — not after it.

“Biggest issue is not using system as designed, and the form is pencil whipped,” his presentation warned.

Olson later warned that “99 percent of the shops” they see fail to follow their own quality control process, calling this a major red flag — one of the errors that “will put you out of business.”

An intake sheet with information like prior damage should also be filled out completely, Olson said. If a line like “radio codes” isn’t getting filled in every time, he suggested ditching that blank altogether. Then demand the staff fill out the remainder of the lines every time.

“You get to say; you own the company,” he said. Share the intake form with the techs as well, Olson said. It’s got information they’ll need, he said.

The owner has a responsibility as well to the shop’s culture, according to Olson. Noting that metal dust can linger in the air for up to 24 hours, he asked how many of the owners or managers in the audience had who’d walked by a car in the shop that had its windows rolled down.

“You just created a culture where that’s OK,” he said. Instead, roll up the window and tell your staff to knock it off, he said.

If an employee refuses to do any of these steps or the other quality control measures Olson suggested a shop follow, “maybe they shouldn’t work at your shop.”

Letting one employee reject your system means the rest won’t follow it either, according to Olson.

An owner might balk at challenging the defiant employee because he’s “‘so productive,'” Olson said. But how many of the audience had let go the one employee “you thought you couldn’t live without” only to find “things got a lot better?” he asked.

Olson, who serves as an expert collision witness and whose company Future Forensics has performed nearly 10,000 investigations, offered some guidance when a vehicle does slip through these QC and culture cracks.

If a shop is confronted with a list of customer complaints two weeks after returning the vehicle, “you should buy the car,” he said. It’ll be cheaper and “less intrusive on your life,” according to Olson.

Many of the cases Olson receives often start with something simple, he said. He recalled a Nissan Pathfinder where the rear windshield wiper didn’t delay for the rain properly. The auto body shop sent it to the dealership, who found other things. The vehicle still doesn’t get fixed correctly, so Olson’s company gets called in — and uncovers a variety of issues, demanding a “complete rerepair.”

“If that happens, you gotta be really careful,” Olson said. And if you’re a direct repair program shop, your insurer definitely doesn’t want any “phone calls,” nor do they want to risk a customer defection, he suggested.